Tension and a happy ending

My solicitor had been optimistic. She figured we were on course to complete on March the 29th! But certain things needed to be sorted still. One was that I needed building insurance. That's compulsory, and for a reason; until I pay off the mortgage, I don't own the place. Can't let it burn down without being able to have it built up again. But that was easily sorted. Then there was the bigger problem: Japanese Knotweed. It doesn't grow in the garden, but it grows on the river bank. And that means it could spread into the garden and towards the house and take it apart and render the house worthless. Oh dear! The mortgage lender had been sitting on its hands and staring out of the windows for weeks, wondering if they thought that was a likely scenario. And time was ticking. 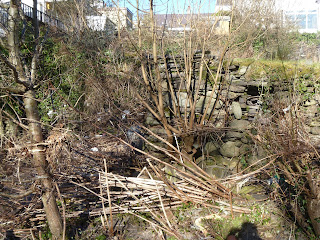 The knotweed (the sub-horizontal stuff; it does back over winter) near the end wall of the garden

If we wanted to complete on March 29th, Rose (the current owner) would have to have moved out by then. And moving out is quite a task! Especially if you've lived somewhere for a fair while. And she had been there for 18 years. She also wanted to know what she was up to, of course. As did I!

Then, on Friday the 9th, I got the email from the mortgage lender. All was well! I could breathe easily. But then on Monday I got a text from Rose, saying she had been told there was no decision yet. Oh dear! I phoned the lender, and it was right; that email I had got had been sent prematurely. They were still deliberating! Shit! They were supposed to decide the next day. They had better! 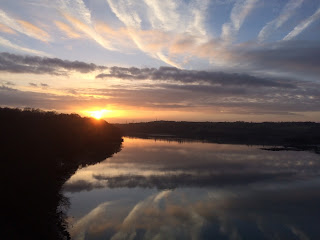 I biked past this amazing sunset while worrying about the house

The next day I hoped to hear something. Nothing! So I decided to start phoning myself, the day after. I couldn't immediately; I was involved in a practical. But during that practical an email came in from my solicitor. Success! The mortgage lender was OK with all of it! No more obstacles! And none too soon; it was the 14th already...

A little bit of faffing followed, but with result; later that day the solicitor contacted me to say the contracts had been exchanged. It's final now! Nothing can really go wrong now! The house will be mine! Hurrah!
Posted by Margot at 08:56