I have a sewing machine! I've had it for a long time. We are not always friends; I am not very good with it so I often end up with the thread turning itself into knots. But it is a very useful thing to have when I manage to work it well.

With the heatwave this year, and the forecast of more to come, I am increasing my collection of summer dresses. They're the best thing to wear if it's hot! And I bought a long one, but I thought it didn't give me enough freedom of movement, so I wanted to make the split on one side higher. But then you have to sew the hem. It was just the task for a sewing machine! So for the first time since moving house I brought it out.

I plugged it in and it started sewing. Right away. Oh dear! It's supposed to wait until you press the pedal. I had no idea why it was doing that but I tried it a few times; it was consistent. It was a bit spooky that it would just sew like mad when it had power! I decided to pack it up again and put 'seeing if I can have someone have a look at that' somewhere on my to do list. And then I started stitching the hem by hand. At least the technology of needle and thread is rather reliable! 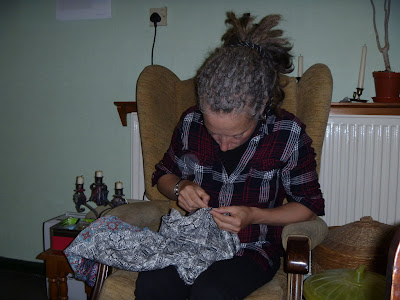 Old-fashioned needlework
Posted by Margot at 06:37