The weather forecast was lovely for the whole weekend. I had lots of chores to do, but I wanted to enjoy the weather too. The easy option then is to go for a run somewhere nice. You can cover quite some ground, but it doesn’t need much preparation. There was an underground trip happening as well, but these trips tend to linger on a bit, with lots of pootling and hanging around and I tend to get impatient. I had also already been. I also knew there was a risk of a curry afterwards; I am not very keen on curry, and really not keen on coming home too late. Weekends are short, and if you miss the entire Saturday then the Sunday ends up being rushed and stressed and that's not how a weekend should be! So, rather uncharacteristically, I bailed out and decided to stay above the surface. In the sun!

On Saturday I decided to spend a bit more time at a slate quarry I had before only skimmed: Alexandra Quarry. The sun was out but I was careful; I was wearing a T-shirt and three-quarter tights, and had brought a jumper. That turned out to have been superfluous.

I ran towards the mine, and marvelled at the sunny view on a still snowy Snowdon. I then ran all around the quarry. It was a lovely day and I had a blast! I also ran through what looked like an active part of the quarry, even though it also had a clay pigeon shooting range in it, which suggests maybe the quarry isn't active anymore. At the end I ran over the hilltop. There I found a surprise; firstly, the top was conglomerate; that's not a very common rock type. And the rock around here is very old; an old conglomerate always excites me as the pebbles within the conglomerate must be a whole lot older than the entire rock. That's old! And the rock had an information board; this rock had fascinated people before, and not just any people; Darwin had been here in 1842. Only weeks before I had been talking extensively about Darwin's geological fieldwork in North Wales to the students! 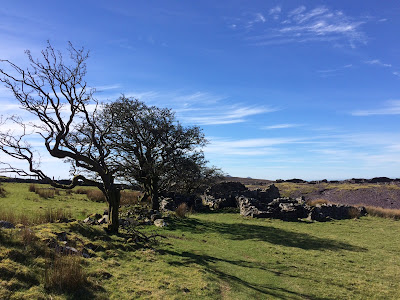 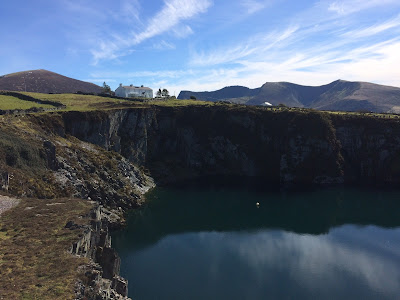 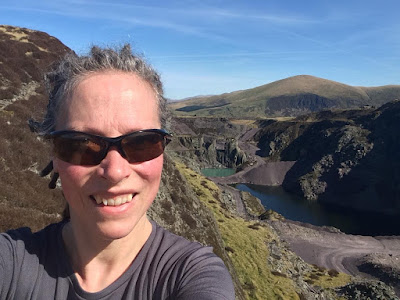 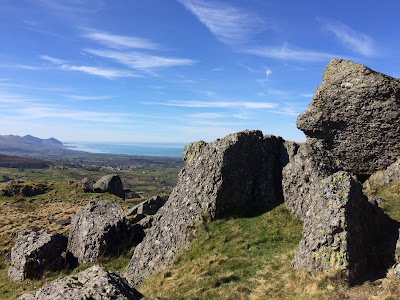 The conglomerates on the hilltop 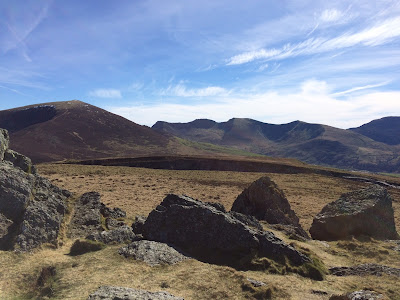 View to Mynydd Mawr (left) and the Nantlle Ridge (centre); I haven't walked the latter yet! The gap in the middle is part of the quarry

I hadn't needed the jumper at all, and even regretted the T-shirt and the leggings. This was tanktop-shorts weather! But what can one do. I did a small extra stretch on easy terrain at the end of the run, after I'd dumped the jumper in the car, as I had spent quite some time marvelling and not running.

On Sunday I decided to go again; this time I chose Porth Wen, between Amlwch and Cemaes. It was lovely! This time I was actually wearing a tanktop and shorts. I had my jumper around my waist just in case.

I parked at a layby, ran onto a public footpath, and went east. The path vanished and I scampered a bit through fields until I turned back. I then found another footpath going west; this rather soon provided amazing views on some old brickworks. I decided to run to it. The coastal path came quite close. The access route to the actual site was a steep, very narrow, slippery path through dense vegetation. Soon I encountered a dog, who seemed a bit baffled by my obstruction. Then two humans followed. One was a woman from my Welsh class! That was nice. She is an avid rambler, and I had already seen on Facebook she had been near the quarry I had been the day before (on Mynydd Mawr, to be precise). Funny, that!

Lurking in the brickwork shadows I put on the jumper. Good I had brought it! But after I had explored the place I was getting hungry and decided to run back and go home for lunch. Which I did! It was nice to get some runs in; during previous weekends in which I would have had time the weather had generally been atrocious. That makes all paths muddy and slippery and forces you onto the road, obscures the views, and makes you less comfortable. So this was a really nice change! 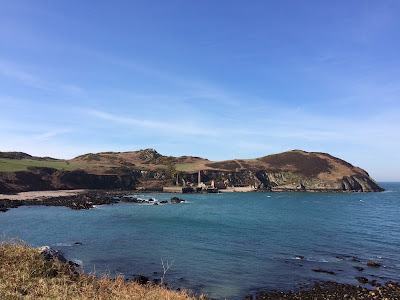 The brickworks from a distance 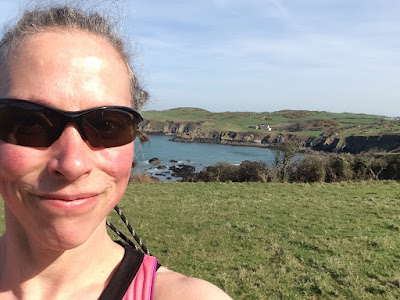 I had learned form my mistakes; no sleeves this time! 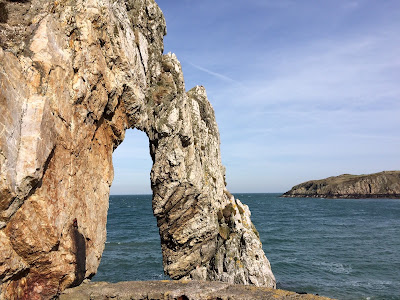 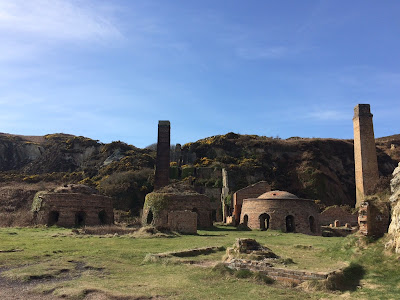 The brickworks from closer up