I have a long but rather narrow drive. I normally park nose-first and as close to the low wall separating my drive from the neighbour's; that way I can get past the car with my bikes, and also with the wheelie bins. That tends to work fine.

On Friday I noticed my car looked a bit bad. I looked closer, and noticed the reason: I had driven it straight into a sticky-outy bolt from the gate (which I don't use; it's always open), which had, of course, lead to a flat tire. Oh dear! At least I noticed now, when I didn't need the car. And I was at  home where I have all the kit. Quite unlike the previous time I had a puncture... And in a way, it's good I managed NOT to damage any tires on that bolt in the three previous years!

I decided to try and change the wheel right there. I re-parked the car and got the wrench and jack out. With a screwdriver I got the hubcap off. Then I tried to undo the bolts. Oh dear! Two of them moved after a lot of persuasion. The other two didn't budge. Not with all the violence in the world. What I needed was more leverage. I texted Guy; would he perhaps have a length of pipe I could slide over the wrench, making it longer that way? He thought he had something to the same effect. I biked over.

He thought he had a breaker bar you could put a wrench-head on. He went out to get it. He turned his entire car upside down without finding it. Another oh dear! Now what? He just gave me advice. Whack the bolts with a hammer. Try twisting them the wrong way. If all of that would fail, we could probably source some pipe at work; we were both involved in an open day the next day, so we would be there anyway, even though it was Saturday.

I got home again and bumped into the neighbour. He is a motor racer so he has an entire garage full of tools. He had what I needed! The exact kind of breaker bar Guy hadn't been able to find. He got the nuts off. He even helped me put the spare tire on. After having brought it to the desired pressure! Everybody should have a neighbour like that.

The next day I drove to the tire centre, ordered a tire, ran to the post office (something was waiting for me there), ran back, still didn't have a tire, ran to the supermarket, did my food shopping, walked back, paid for the tire, and was off.

On Sunday I put the new tire where the damaged one had been. If you have a brand new tire you may as well drive on it! The garage had warned me two of my tires were so worn they wouldn't get through MOT again. Now one of them is replaced! And I made the bolt of the gate less prone to tire destructing with a shoelace and some duct tape. Job done! 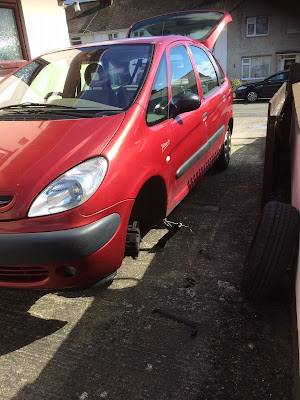 There we go again 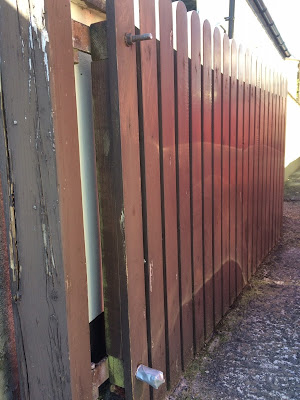 The two bolts; the lower one now with a tire-protecting duct tape coat...
Posted by Margot at 08:06