Brexit on the radio

When I came out of the field recently I found a lot of missed calls and a voicemail and an email. Radio Cymru again! They wanted me to talk about Brexit again, what with article 50 and such. They wanted me for the morning program the next day. I said that was OK but they didn't get back to me. Then they did; too late for the morning program, but would I be willing to swap to the afternoon program? I was. The day rolled on. No sound from Radio Cymru.

A week later they were back. They had a French woman lined up for a chat on yet another morning program; the one on the eve of the triggering of Article 50. Would I be willing to join? I figured they hardly deserved my efforts, but talking Welsh on the radio is just the kind of Welsh challenge I need. I agreed!

An early Tuesday morning I biked to the studio. The receptionist didn't expect me. Oh dear. Had something gone wrong anyway? But some asking around later I got a badge, and was ushered in to some office space with adjacent studios. A lady welcomed me, gave me a cup of coffee (yay!) and pointed to a man in one of the studio spaces: he was the presenter, and would talk to me. A real person! Instead of a disembodied voice coming in through headphones. That's nice. 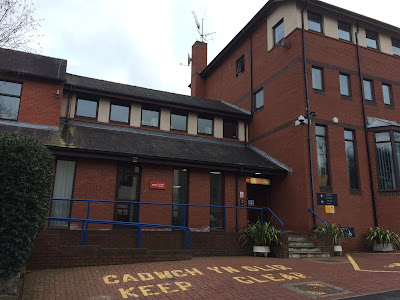 When it was time, I was shown in (with a second cup of coffee - yay!), and got introduced to the presenter. He practiced the pronunciation of my name (he didn't quite get it right; as most people do, he put the emphasis of my last name on the last syllable, even though almost all Welsh words have, like my last name, the emphasis on the second last), and said he's asked me about why I'd come to Wales and whether I thought too many immigrants came to Britain. Eh, OK! I had about two minutes to ponder that.

Then it started. The words just didn't come out. It was excruciating! Talking is hard when you're inside a studio. Oh well. The presenter didn't seem to mind. In minutes it was over. A new lady approached me when I stepped out of the studio door again; she was the lady who had asked me in the first place. We had a small chat about what the world was coming to. Then it was time to leave again!

So I've made my debut. I think it went disastrously. We'll see if they'll ask me again!