It was time to clean up my mess! Two weeks ago, I had left the dig with lots of stuff in the final passage due to a blast done rather late in the day. The week before we had been elsewhere. Now I could finally sort this out! And I could also finally get comfortable at the far end of the dig, as I had packed my waders. The water is rather deep there. And cold!

I got to the parking lot early as I had been in a first aid course which finished early. No use going back to the office first! I had not even taken off a shoe or I heard a heavy engine. Miles was early too! I changed and we walked up. It was nice weather!

We got to the messy part of the dig and decided to try to blow up the big slab that had come down the previous time. We were a bit short on supplies though! Only big charges, not much resin, the wrong nozzles... and we had trouble with the resin gun. Again! But we managed. We tried to blow the thing up but failed. Then we tried to break it up with the breaker. That didn't work either. Then I crawled over it and drilled two holes from the other side. That worked! We got rid of the rubble and found ourselves with a lovely passage. And there was still time to go through!

I lugged the waders through the passage. And the tripod! My pics the previous time had been shit. I wasn't comfortable in the water and had rushed the photography. Now I would be more snug. And it worked! I was quite comfortable in the passage. I took some pics. This time there was a bit of an issue with smoke in the passage due to the blasting on a day with little draught, but well. Miles had another prod at the blockage but it still looked pretty much hopeless. Time to go home... 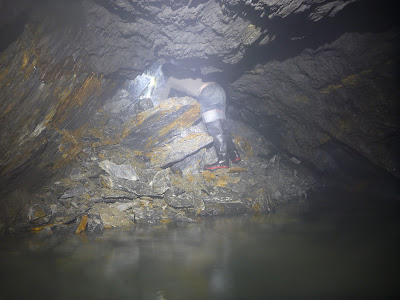 When we got out it still was light enough to walk down without our head torches on. Very nice! This wasn't the most productive night in the dig (in spite of it being nicely long) but one has days like that. And maybe next time we'll try to go up rather than ahead. It might be easier!
Posted by Margot at 17:52