Two years ago we had a through trip in the mine opposite the one we have our digs in. We couldn't enjoy it for very long! The bottleneck in the route collapsed again. David and Paul had had a look at it since, and David was keen to go back and try again to unblock it. As Miles was otherwise engaged this week, and there therefore wasn't any digging going on, I was there too. We first went into the bottom to look at the blockage from below. Didn't look too good! And the place is rather wet so you don't want to linger there. 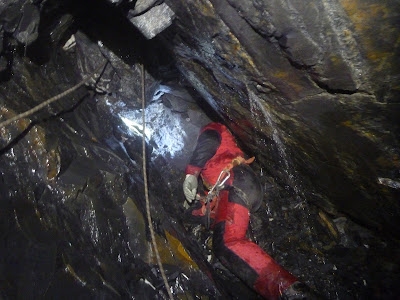 Phil looks at the blockage from below

We were with six people; quite a lot for a place like that. I went up and had a look; then David suggested I go down again and make place for another person. I ended up having a chat with Phil in the chamber while the other men were bashing away at the blockage. They made progress, but not enough to get through!

We then went up to approach the blockage from the other side. That is a bit of a way. There David was a bit cautious; he figured a lot of the rocks there were perched precariously above the hole and could roll down any second. Staying away doesn't unblock a blockage, though, so we had to chance it anyway. I stayed in the background; I had had a headache all day and wasn't particularly keen. And standing in places David deems dangerous gets you yelled at, and I find that unpleasant enough when I don't have a headache. I drank tea and watched the men work!

Phil jumped in and tried to move a big rock that was in the way. With some clobbering-off of pesky edges of the rock, and levering with a convenient piece of rails we had found, we managed to roll it over into a better position. Then we tried to use the rail to drop the blocking rocks down the hole but that didn't work. And time was ticking away! I was keen to go home, but that tends not to mean much to the others. Luckily Simon was tired too. We left it and went back! I initially went the wrong way, which didn't do anything for my mood (David and Phil had seen me set off but Phil thought it was on purpose and David had whispered I was going the wrong way, which he erroneously believed I would had heard). Oh well. We got out eventually, and got home. We should go back some day soon. 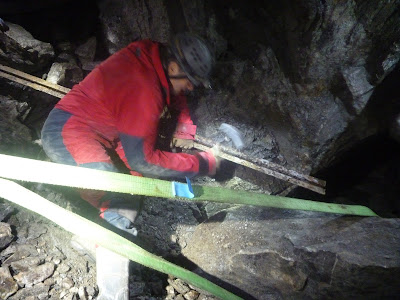 David getting rid of some edge that was in the way.

We might see if one more session with the rails will do the job; otherwise we should get Miles involved, as he leases this mine too, and can just come in and blow up the blocking rocks by means of a normal day in the office. It would be nice to have that through trip back!