I know this is already the umpteenth time I write about knee pads, but these things matter. I wrote about making a new set after the old set fell apart; then I mentioned the new ones already started to come undone and that I had made a start with fitting a new hard(ish) outer layer on them. Thanks to some more work on all of them, including during the AGM of the cave rescue team, they are now both up to date. And they will wear out all the time, but it's good to start a period of wear and tear (hopefully; there had been no digging the previous week) from a position of having two good pairs. I will be able to keep up! Doing some re-stitching doesn't cost a lot of time. And I have one leather pad that has been slightly pre-formed, and which had little gullies burned into it with a hot gimlet, and now I'll see if that one is more comfortable due to the shape, and lasts longer due to the stitching being embedded. If so I know what to do if I need to put new outer layers on! I already have leather waiting... 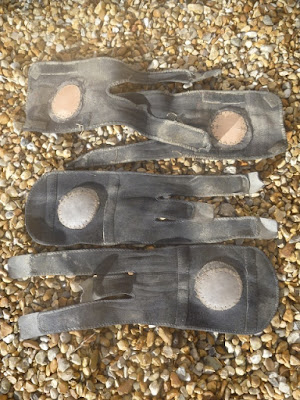 The two pairs of knee protectors; the second one from the top has the elaborate leather pad
Posted by Margot at 08:55