Not in the dig

It was a night of cold turkey. It is now such a routine to go digging on Thursday Night it's strange to do something else. And I struggled a bit to get enthusiastic about going into a mine I had been in many times before, and where I was unlikely to see anything new. But Miles was otherwise engaged, and I don't think digging on my own is a good idea. I would be off with the Thursdaynighters for a change! And we were headed for Bwlch y Plwm. I had been before more often than I've blogged about it, it seems...

We drove to Llanfrothen via Groeslon, where David had to pick up some stuff he had bought on eBay. The seller turned out to live on a farm with some fierce-looking border collies. In spite of theis transaction we were in Llanfrothen rather early. Time for a pre-mine coffee!

When we were complete we loaded ourselves into two vehicles as parking at the mine is tight, and set off. The land had recently been sold, and the new owner had put up miles of fencing. That made parking a lot harder! Luckily we were not with more cars.

We changed and set off. I never really remember how to get to the entrance. I ended up walking up with newbie Rich, and with Chris and Lazy Jason, of which the latter two claimed to know the way. Good; then I don't have to. But we walked further than seemed right. And we ended up at the wrong part of Bwlch-y-Plwm. Oh dear! From there, Chris wandered off into oblivion. I did not want to get split up more so I decided to wait for him. When he was back we went back into the more plausible direction; after a while, we heard voices, and not much later I saw the others.

David had rigged the first pitch with his rope; I know he had rather not, as his is longer than mine, and the second pitch is longer than the first. He thought my rope might not be long enough for the second pitch. I thought it was probably OK. He based his judgement on Llion being stuck on my too short rope once, but I was certain I had never been in here with Llion so he must have misremembered at least part of that story.

I went down the first pitch, and went on to the second. I rigged it, making sure there was a knot in the bottom of the rope (just in case!), and waited. I heard voices but they didn't approach. After a long while I went back to see Jason and Rich waiting for something or other while more people were coming down. They came through and Jason went down the pitch. Then David turned out to be right; the rope was too short. Luckily it is a comfortable pitch so Jason patiently waited for the other rope to be put in place. David was all I-told-you-so and what-were-you-thinking but he had been quite dismissive of loads of things I did recently so the criticism had lost its sting.

As we now had in effect had four ropes I came down one of the long ones, helped get Jason swap over to the other long one, and went down after he had reached the bottom. And all was well! Re-rigging is a bit inefficient but nobody died and nobody had been uncomfortable. We went on.

We then came to the level with a traverse and bridge to an alternative exit. The bridge used to have a handline but it didn't anymore. The anchors were, so I rigged an improvised one for Jason, who didn't like the exposure of just the bridge. 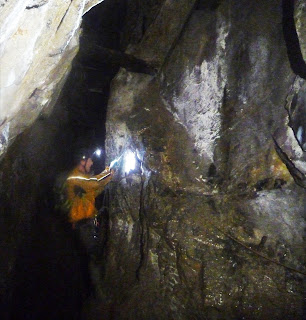 Jason on the traverse

After we had looked around on that level we went down. Once at the bottom we decided we were OK with going out and not exploring every corner of that level too. I was sleepy! We got out and changed. Paul and David had been considering checking out another level after this mine, but that just isn't very practical. You don't want to drive to the next place in your dirty and wet kit, and you don't want to change back into your dirty and wet kit after you've exchanged it for your comfy dry civilian outfit. They decided against! We could go home. If they would have persisted I would have had a way out; Chris wasn't keen on the next adit and had already offered me a lift home. But it wasn't necessary! And we were home quite early, in spite of the getting lost and mis-rigging. Nice!