I had been going into the field with students, without having a first aid qualification. Showing the students Cwm Idwal and Red Wharf Bay that wasn't a problem; we the teaching staff were shadowed by qualified technical staff. On the beach with the glacial sediments, though, there were only two of us, and the other lady can't stand the look of blood. Oh dear! And perhaps worse than that: I was a full member of the cave rescue team who didn't have a first aid qualification. Not quite right. I had got my first official certificate in 2012; that had clearly run out by now. The time never had seemed right to renew, but now that I had a teaching job in which I would be taking students into the field every day for more than a week on my own, and in which there was a bit of a lull in April and May, I figured the time was right to get re-qualified. I discussed this with the Head of School, who is my line manager; he thought it was an excellent idea. I registered for a course through university.

The day came my course started. It was a relaxed business; it was in Parc Menai, which is only 20 minutes on bike, and the weather was good; they also didn't start until 9:30AM. I got there early, at the same time as a bloke who would turn out to be called Lee. We were shown to the coffee room. Excellent! Then others came in; lots of Welsh-speaking people. Good! That means I could practice a bit.

When we started we had to introduce ourselves; we had Dilwyn from Neuadd Ogwen, Dewi from a charity called Antur Waunfawr, Llion who was a sports teacher at a school, Elaine who worked for nursery Tir-na-nog, and Alwen and Sharon from a school for kids with learning difficulties. Lee worked for construction company Watkin Jones and then there was me. A bit more of a varied group than the cave rescuers I had trained with the previous time! The instructor was Gwyn Jones and he was an ex-paramedic.

It started for real. We went through a syllabus; the information was, of course, very useful but most of it I more or less remembered from last time, and the speed was low. I am used to processing information at quite a tempo (otherwise I can't do my job), so this was somewhere between frustrating and relaxing. We started with the basic checks you do when you come across someone who is unwell, and went through some various scenarios that can lead to people losing consciousness and how you distinguish them, and so on.We also did CPR. We had frequent coffee/tea breaks so I could keep my caffeine and water levels up.

We had a 45 minute lunch break; the others went to a nearby cafe, but I had my sandwiches with me, and work to do, so I didn't join them Instead I found myself a rock to sit on in a copse, and ate my lunch there, while working a bit on an article I am a co-author on. It was quite nice! 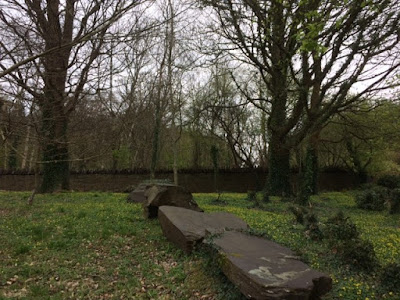 My lunch spot for the duration of the course


We were done quite early, so I biked back to the office and did some more work. The next day was Thursday, so when we finished I just drove to Blaenau Ffestiniog and got there only minutes before Miles appeared. The last day we were done by around 2PM so I could work quite a lot afterwards.

But back to the actual course. We discussed all the common topics; cuts, fractures, heart problems, eye injuries, poisoning, choking; you name it. We practiced the Heimlich manoeuvre using some special vest with an air chamber and a blocking thingy. If you do your abdominal thrusts well the thingy comes flying out. Cool! The most trying aspects was fractures; Gwyn showed us a video with the six most horrific injuries from the 2016 Olympic games. Believe me, there were two that are hard to see. Brrr!

On the last day we did two MCQ tests; we had to get a certain percentage correct to qualify. I did both of them flawless and got some spelling errors out as well. I'm not ashamed of being a swotty kid.

When I biked back to Anglesey afterwards I figured I hadn't learned many new things but it had been good to repeat this stuff, and I felt a lot more confident about using it. I hope I won't need to, but I'm glad I did it. And in addition, I had finished with the paper I had been working ion during the lunch breaks. I also realised I had left my syllabus, but I have the St John's Ambulance book at home. That will sort me out when I want to revise before going into the field with the students! 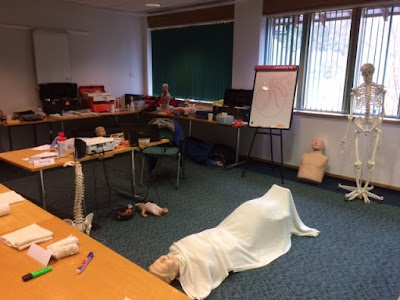