I had heard of Michel Houellebecq for quite a while. It sounded like my kind of writer! I never got around to reading any of his work, though. But then I went to the second-hand book shop with my mother, and there they had a Dutch translation of Elementary Particles. As I can't read this work in the original language I don't mind too much whether the book is translated into English or Dutch. If I can read the original language then I prefer that. But anyway; now I had a Houellebecq. Funnily enough my taste in art (in the wider sense of the word; music, literature, film) has become a bit sunnier over the years, so my taste was moving away from this particular writer. But hey ho! 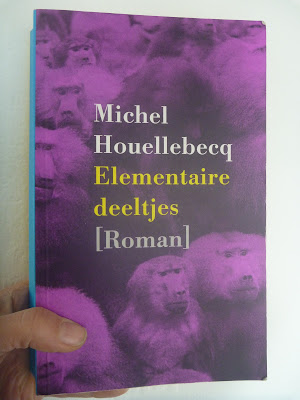 So what did I think? I liked the nerdy sciency thoughts of the main character. I didn't quite like the views of his half-brother. I knew I wasn't going to be presented with a wildly enthusiastic view on humanity, but Bruno, the half-brother, overdoes it. It's not as if his acquaintance with the world gave him much reason for optimism, but one can make something out of a life, can't one?

I thought the denouement was a bit underwhelming. Maybe that was because it was kept abstract; there was no account of how the societal change was experienced by people. It was just commented on from a distance. Maybe reading this after Cloud Atlas was a strategic mistake.

So what was the judgement altogether? Not my favourite. I do think the translation was good, though...
Posted by Margot at 07:31