We had managed to tunnel through four chambers, but the fifth one in the succession was proving quite a challenge. The collapse that blocked the way was substantial, the rock quality was appalling, and there wasn't much space to put spoil. We decided to try another way; there was a level above the one we were in, and perhaps we could get to it by tunnelling upwards. We had plenty of places to start! We decided to first give it a go at the very beginning of the dig.

Miles couldn't come early so we met at the parking lot. I had brought my big bag, as I was well aware all the kit (drill, extension lead, crowbar, etc etc) was at the far end of the dig, and that I was the likely candidate to go and get it. And that's what happened. We went down, had a look at where we might start, and then I was off. It was a bit of faff to get all the heavy and bulky kit back, but I managed. I also tried to take some pics of the artefacts that we lying in the water in the furthest level. We might not come here very often anymore! 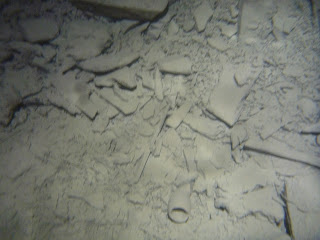 A pipe in the water

We decided to try to blow up the wall; that way we would reduce the amount of disruption of the loose blocks, or at least we hoped so. Miles drilled some holes and we charged them. We had stemmed the holes with sand rather than resin, so we could blow them immediately. And with success! There now was a space, and all blocks were still where they had been for some hundred years.

We crowbarred some loose slabs out of the way, and then I had a try climbing up. It went several meters! I chucked some more stuff down and had a look at the next location for shotholes. We have no idea through how much rubble we have to dig, but so far it's going well!

We just had time for one more shothole and one more blast, but that was a bit of a dud. Oh well! More luck next time. Would we manage several meters again? Let's hope so!
Posted by Margot at 09:15