Easter in the Netherlands

Normally I avoid the Netherlands during Easter! Many of my friends go hiking then. But this year I was late with booking a spring trip, and I am not biblical enough to know off by heart when Easter is, so I accidentally booked my trip slap bang in the middle of it. My main aim in the Netherlands is always my mother, and she doesn't go hiking then, so it wasn't a problem. But I would have a more family-focussed trip this time than usual!

I spent most of the time with my mother. That's always nice! We went to the cheese shop and I tuned a radio for her and I worked on a piece of leather for a knee pad I had brought. And I had brought some work stuff to read. And of course we drank buckets of coffee, tea and wine. Lovely! 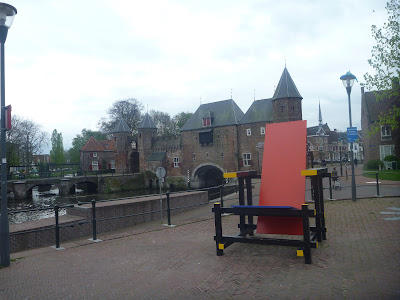 A Rietveld chair had appeared at the Koppelpoort

I also had left running kit at her place last time; so without having to lug bulky shoes to the Netherlands I could go for a run. I ran down memory lane; when I was a small kid, my dad often took my sisters and me to a nearby area with wind-blown dunes. Not the coastal ones (although he did that too, but that was logistically more work) but some which are a relic from the second-last ice age. I ran all the way to them! Not onto them; the loose sand is a pain for running, but it was great to see them again. I hadn't been in so long! There's still something magic about that landscape. 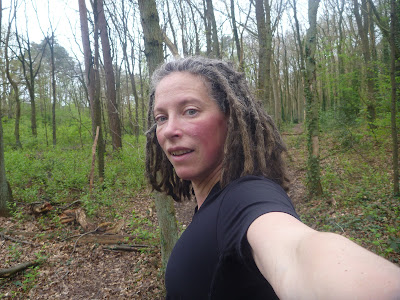 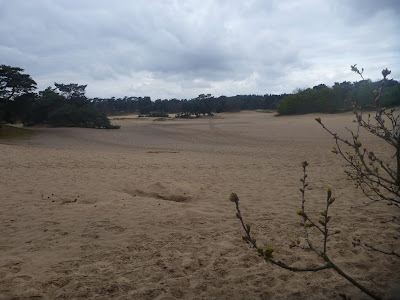 One of the few not hiking was Floor, so we could meet up. We went for dinner in Amsterdam. Train travel between Amersfoort and Amsterdam wasn't possible so I travelled via Utrecht, but hey ho. We met in an Indonesian restaurant I had quickly googled at Manchester Airport. I think it was a good choice! It was in Bos en Lommer, so we avoided any outrageous Easter tourist crowds which would restrict themselves to the centre, and the food was amazing. And Floor had come by train, so he could have a beer. After dinner we walked in the direction of Central Station, and when we passed a pub we decided to go for an extra pint. Or rather, an extra 30cl of beer; this is Amsterdam after all. It was good to catch up! So good I turned out to have the last train home. Oh well. I still came home! 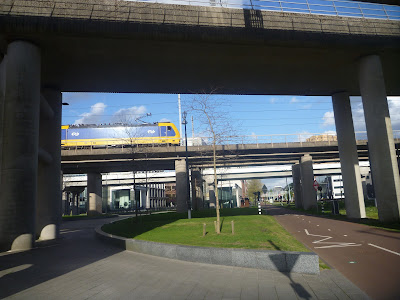 I travelled over station Sloterdijk; not the most scenic part of Amsterdam, but it was sunny

I also popped by my sister, who had just rowed a marathon; she was in bed when I arrived (the rowing had taken place at rather unusual hours) but that was OK; that way I could catch up with her husband and children. My niece now has a harp! And she played me a welcome song. I was touched. When my sister appeared she announced she was fine; no aching muscles to speak of. Good work!

In the evening we went out for dinner with one of our cousins; we try to do a cousin dinner a few times a year, but there are only seven of us in total, so it never gets too crowded. We are spread out over four different countries; two different continents, even. And not everybody is on speaking terms with everybody. And the youngest of seven had just had a child! He has other things on his mind now. Like not letting the family name go extinct. So three out of seven wasn't bad. And as usual it was good! 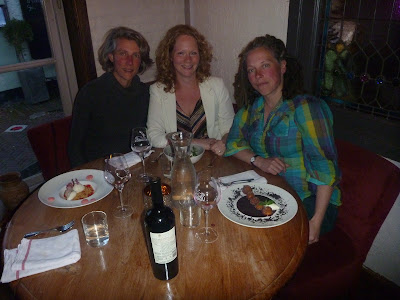 Cousin dinner with Petra, Sandra and me, posing with our desserts

The next day we had a relaxed breakfast, and when that had gone down a bit I went for another run. My niece offered to come with me! That sounded good. The whole family has running on its mind; every year the town organised a City Run and it had just been. It was still resonating! We set off; she suggested we do her usual loop. Fine with me! Except that my presence seemed to distract her a bit and within minutes we had veered off her usual route. We traversed the entire heather field in all sorts of directions. After a longer run than intended we got back to town. When we reached the houses again I asked if she was OK with me adding a little loop; I wanted to do some distance at 41-year-old speed rather than 10-year-old-speed. She was! So I did half an hour extra and came back satisfied.

That night I went back to my mother. The next morning I would go to my dad, who had been hiking in the Ardennes. I woke up before my mother; I did my exercises and had a shower, hoping she would stir too. I would only have limited time at my dad's! When she still didn't I woke her up. Then we had breakfast together and then I was gone again. I'll be back in ~2.5 months!

My dad came to pick me up from the railway station, and made me some coffee. Then he left again; he had to pick up the elderly lady from a few doors down. So nice, a street in which the people look after each other! Then he came back and we had some lunch. Then we went for a walk. A family process had started of discussing the time between the divorce and us leaving home, and I had some things to say. That went well, except for the violent hailstorm that festooned my words. It was a confusing time; for me it was between the ages of 12 and 17, and that probably is a confusing time anyway, but sharing it with two other confused teenagers and a father to whom parenting doesn't come naturally exacerbates the situation. But we're making progress making sense of it!

And then it was time to go home. All went well! On the airport I did some more work, which would alleviate the post-Easter work rush. Altogether a successful home visit! And I already know when I'll be back... 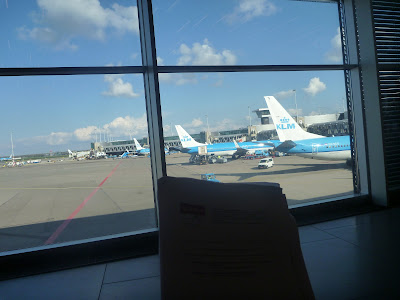 Reading articles with a backdrop of KLM planes
Posted by Margot at 11:03