The girl on the train

I read a modern book! This time, not the first time, my mother was the inspiration. She happened to have the Girl on the Train, and when I visited I started it, and got interested. I took it back with me (with her explicit consent, of course).

It was very gripping! I liked the way people project whatnot onto each other, and end up being forced to reconsider. We spend our lives making assumptions, and hopefully recalibrating all the time. And sometimes your initial assessment is quite, quite far off from the final one. We've all been there! And the differences in how various people, including themselves, view the same person are quite convincing too, or at least to me.

What I was less keen on were a few moments of my suspended disbelief falling down. When? Allow me to place a spoiler alert here now. I will shroud myself in generalities but those who haven't read the book and still want to may want to stop here anyway.

From the beginning it is clear the main character has (had) blackouts, and it is explained in the book that if you are so drunk you don't remember what you've done, this is because you didn't make any memories at the time. That way they can't come back to you. But in the book, they do after all. Not sure about that. And do people really jump into bed with each other that easily? One would hope not.

In the very end I thought things went really wonky; there is a scene in which a crime is committed, and one person gets their fingerprints all over an important item and nobody seems to notice. Surely the police would check such things? Even if someone confesses I am sure they check the evidence against the confession. For me that was a bit of an anticlimax.

Final judgement? A quick and exciting read, but I won't re-read it. 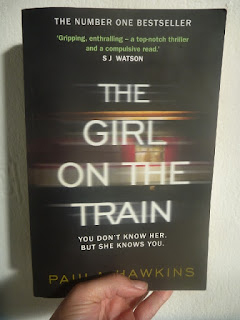