I would have dinner with Jaco and Marjan again. Then Marjan mailed; she wanted to see the film "Lion", and the only chance she had was the day of our dinner; we decided to combine the two. It wasn't a film I would have picked, but it sounded interesting enough.

In the morning I sorted my car trouble, in the afternoon I was at a university open day, and then I went up the hill to Jaco and Marjan's house. We had lovely pizza and tiramisu, and some beer, and then we were off. I was enjoying it; I hadn't been to this cinema in months, and not in company in much longer time!

In the cinema, which turned out to be the one I had just taught in the day before, we found a friend of Marjan's of whom she knew she would be there, and we also saw one of Jaco's PhD students with her boyfriend. Then two more PhD students walked in, more associates of the School of Ocean Sciences; that was nice! A popular movie with salty types.

It started. I suppose the story is familiar: small Indian kid gets separated from his family, survives for a while on the streets of Calcutta, ends up in a scary orphanage, and gets adopted by Australian couple. Twenty years later Google Earth is launched, and he sets off on a quest to find his village back. He knows he was in a train for several days before ending up in Calcutta. That restricts his search to pretty much all train lines in India. He does manage to find it, though, and flies out there to find his birth family. And succeeds! The movie is quite long, but it covers a lot. I didn't think it dragged on at all. And you know what is going to happen (I had already read an interview with the original man, Saroo Brierley, in the paper; it's a real story) but I didn't mind.

I liked the casting, the scenery and the music too. There was pretty much only one thing I didn't like, and one question that bugged me afterwards. The thing I didn't like was the film poster (or at least the version I saw; there seem to be more). It mainly shows Dev Patel (who plays Saroo) and Rooney Mara being all romantic. The romance between the characters is not anywhere near the essence of the film. I suspect they put it in as you probably sell a movie better with images of white women being sexual than small Indian boys struggling to survive. But we have enough movies about white women being sexual, thank you very much. Show me the boy! And the kid who plays the young Saroo/Sheru is great.

The question I had is: why didn't Saroo Brierley learn Hindi? He knew that was his mother tongue. He spoke it when he was adopted. His adoptive parents would probably not have been able to distinguish it from Bengali or whatever other language people speak in India (I couldn't tell the difference in the movie), but the adoption organisation certainly could. And now he comes back to his home town and can't exchange a word with his mother. A pity! And I'm sure it's a hard language to learn if you start off from English, but hey, the bloke found his village, which could have been pretty much anywhere in India, on Google Earth; this man is not deterred by things being difficult. Maybe he still will! I hope he does... 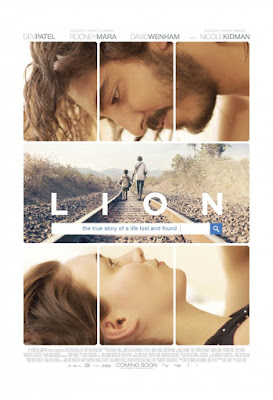