The last training day didn't seem a long time ago. It had been 3.5 months! Time for another session. Some people thought it was rather topical; David, especially, had been pondering what would have happened if I would have cut an artery the Thursday before. I had been in the dig at the time, in some forward position where my only companion, Miles, had no chance of going himself due to his more manly size. What if I would have fainted? That would certainly have been a call-out. I myself think that I would have made it back to Miles (who was only a meter away), arterial bleeding or not; then I would at least have had a tourniquet and moral support so I suppose all would probably have worked out in the end. But one can never rule out disaster; even those who stay at home can slip on a greasy floor and bang their head on a pointy bit of furniture. I will be back in the dig! And I will go where Miles can't follow. But back to the training.

I wasn't quite in the right mood; I had ended up in bed rather late that Thursday, and on Friday I had been quite tired. I still was on Saturday. I had a headache too. We had to get up early as the session was near Wrexham; about an hour and a half of driving.

Four of us from the area teamed up: David, Edwyn, Paul and me. We drove up (Edwyn knew the way) and got there in good time. It was even sunny! All well.

This time there would be no casualty; we would just train techniques. We had gathered at Minera's Cabin Shaft, which has a rather narrow opening. Hauling a stretcher out of there is precision work. That's why we'd practice a bit! One chap called Tony was looking for volunteers to go in first, and I put my hand up. We would scamper in, set up communications using a heyphone and a field telephone, and practice placing some bolts for a hypothetical haul out of a hole inside the mine.

We scurried in, laying the telephone line (this technique hasn't really changed since WWI) and getting to the hole in question. We didn't get the phone to work, but the heyphone did an excellent job. Then I placed two bolts; Tony, who was leading our sub-team, was surprised to find out we all had bolted before. When I was drilling the holes one chap, who had worked intensively for Go Below setting up their initial zipline-festooned route, observed "Miles has taught you well!".

Soon we left the kit and headed back. Tony suggested another route, but it turned out he only knew his way in this rabbit warren of a mine to a certain extent. We took an erratic route out, but we did come back to Cabin Shaft. There we had to wait; the other sub-team had set up a hauling system and wanted to try it.They lugged Tony up while we waited. I just lay down; I was tired. Luckily the mine was dry and comfortable.

After a while we could get out, and go get our lunch. That was nice! But we hadn't yet finished when we were called back for a hauling system. We would try to improve on the other team's solution. We set up a difficult three-way deviation, and a 6 to 1 rig. Then we tested it: it worked! It wasn't perfect; we had a grigri jamming somewhere which limited the adjustability of the rig, but otherwise all was well. The other team had also managed to get the phone working (they had just taken the batteries out, and scraped the contact points a bit. We could have thought of that!)

We hauled up Edwyn from the other team, watched the others come up on their own steam, and de-rigged. Then there was some faffing (I lay down again; I was still knackered). Then we carried everything back and changed into civilian clothes. We had a small de-brief and then we could all go home.

David had requested stopping on the way back for a meal, and I had agreed to that. It was a bit of faff to find a place we all found acceptable, and then only half of us had food. I was OK with the food but didn't want to linger; I had been ripe for bed pretty much ever since I had got up, and I had a half marathon to be rested for the next day. After some lengthy stories by David I cut the conversation short and demanded we leave. David had forgot I had that race the next day, and hadn't noticed in what state I was...

We drove back. The road was undergoing some roadwork, and that involved bumps. My car struggles with anything bumpy, especially with four people in it, and this proved too much. The last bump resulted in a hellish racket. The exhaust! It had come off and was dragging over the road surface. Oh dear. I was too tired to deal with this, but luckily Edwyn wasn't, and he managed to wiggle it loose entirely. David placed it against the "ramp" sign to warn other drivers, and offered to drive the exhaustless rest. He also saw me drink some water, drew his conclusions, and offered me a paracetamol. That was gracefully accepted! I was zonked when I came home. But it had altogether still been a good day... 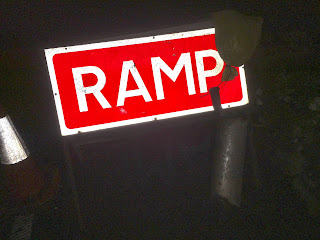