I don't think I often do anything special on International Women's day. This year I did! The university had organised a meeting and I attended. There were some speakers I knew, and some speakers I didn't.

It started with our pro-vice-chancellor Jo Rycroft-Malone. She talked us through the position of women at Bangor University through the years. The very first student, in 1884, was a woman! I didn't know that. There is no gender balance though, not even after 133 years. There are lots of women around but not in high positions.

Then Laura McAllister took the stage; she was a Welsh professor in sociology in Liverpool. She had also, until recently, been head of Sport Wales. She was quite vocal in Welsh politics. She had some well-formulated thoughts on being a woman in a position of power. She was quite aware of the need to speak up as a woman, given that most noise is still made by men. She also knew it wasn't without risk; a woman speaking up is quite a cue for quite many men to start hurling sexual humiliation at said woman. I ponder this on a regular basis on a very small scale; old-fashioned thoughts on gender are not unthinkable on the mine exploration forum I frequent, but I have to give myself quite a pep talk before I call anyone out; the place is a veritable sausage fest and although the act of speaking up is a good thing in itself, but one rarely receives constructive responses. Anyway. She spoke of such things, and of how being a sole woman in a high position does mean you get a disproportional amount of attention, and that you have the responsibility to use that. She also said that if you can't find a role model, you better become one yourself. Such things matter! She was quite inspiring. 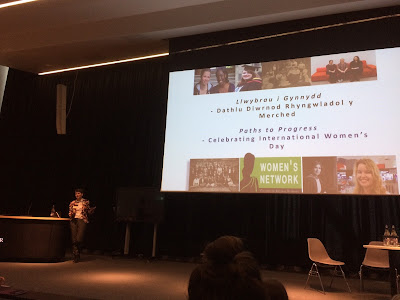 At the end there was time for questions. I spoke up; I had noticed Jo had a nicely bilingual presentation, but where she compared men and women in the English version, she compared 'dynion' with 'merched'; that's men versus girls. That's one of my pet peeves; in the newspaper you very often will see 18- or 19-year old males referred to as men (especially if they have committed a crime; if they have invented something amazing they tend to be 'teenagers'), while females are often referred to as girls up to silly ages. And I know it is the convention, but SHOULD it be the convention to pair dynion and merched? I think not.

There was also a question from the floor from a woman who had a small daughter who had always wanted to become a vet; one day she came home and said she would have to be a veterinary nurse as she was not a man. She was five. Society still does this sort of stuff! There is still a lot of work to do.

There were more speakers but for me, it was Laura McAllister who stole the show. A role model right there! And I try to be one for the students. Although I am worried too; we these days have teaching & research lecturers, and teaching & scholarship lecturers. The latter only teach. We have five. We're all women. Oh dear. Is teaching for women and research for men? What message are we conveying? Do we now need positive discrimination for men in teaching positions? And the same for women in higher management? As I said: there's work to do!
Posted by Margot at 08:48