I came home, opened the garage to park my bike, and switched on the light. Or rather; failed to do so. Nothing happened! I suspected a faulty light bulb and went insiude. No light in the kitchen either. Oh dear! More electricity trouble. Was it just me or was it the whole area? I stepped outside; most houses were dark, and on the other side of the street I saw some flickering candlelight. Looked like a power outing.

I checked if the supplier knew about it; their website quickly disclosed they did. They thought they'd have it sorted by 21:32. A very precise time! But that was all I needed to know. I put on my caving helmet, lit some candles, put some batteries in the radio and went about my business. I cook on gas so I wasn't seriously impeded in my actions.

Later there was a knock; it turned out to be chuggers. They were a bit surprised to see me in my smart teaching outfit with a hardhat on. They were also rather blinded, even though the light was at its dimmest setting. I was already sponsoring their cause so I didn't have to subject them to my light very long.

A bit earlier than 21:32 the lights came back on. The next day I saw some fencing around a nearby electricity substationy thingy. That must have been it! It's sometimes good to be a bit of a troglodyte; it doesn't break your stride if the mod coms fail... 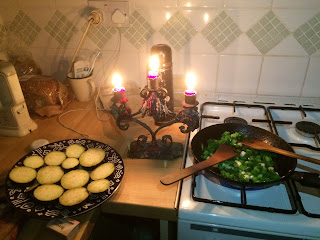