Dig comes to a slowdown

The time had come to start tackling the next chapter of the dig! I had reached the next chamber on, chamber X, weeks ago. The week after I had tried and failed to make the access route safer and easier. Then the week after that I had managed, but only at the end of the night. I had only had a casual look beyond, and Miles hadn't been through at all yet. It was time that changed!

Miles had announced on the forum he had hurt his arm. I figured he would not let that stop him. It did stop him going in early; there is no point being in there on your own if you can't do any work. When David and I got to the parking lot early I decided to not wait and go up. I saw big wet footsteps leading to the adit; Miles wasn't very far ahead! And indeed; when I got to Generator Chamber I saw an unusual light. Miles was in there putting his boots on. We could go in together!

We went straight to the end. Along the way I did look a bit skeptically at some slabs in the ceiling that wouldn't stay up forever; they would do for now, though. I went through and set up my tripod in the deep cold water while Miles had his first good look. I then joined him, which meant wading through the groin-deep water. We started prodding away at the collapse. It wasn't looking good. Miles figured it was just the level having collapsed. But that could be a bit of a challenge!

We prodded away at it for a while. We managed to removed quite some rock, but there isn't an awful lot of space to put it. This would only get worse. Miles was using his arm, of course. And we had music; Miles had brought his phone.

After a fair while we sat down for a break. We had coffee and tea but the chocolates were in the previous chamber! That was bad planning. One makes do, though. During our break we saw a light: it was Jay visiting. He hadn't been in our dig for a while! He didn't want to get into the water (he gets cold easily) but he was impressed by the progress we had made since the last time he had come to have a look. 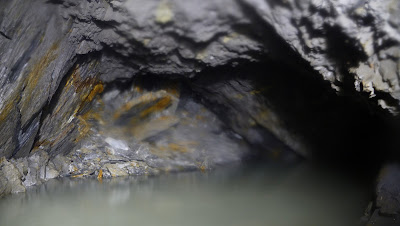 The collapse, photographed with a dirty lens (oh dear)

After the coffee we went back; I wanted to blow up the ceiling slabs. While I was coming out I saw another visitor approaching. It was Jason. He watched Miles negotiate the passage which is still far from Miles' preferred dimensions, and then I introduced the men. I let them do the chatting while I focussed my attention to the drill. Drilling was my job because of Miles' arm, and I was glad for it; I was very cold after having waded through the cold water. Miles was still dry due to his funky boots. The drilling did me good! But while I was charging the drill holes Miles announced he had to leave. We said goodbye and I finished the charging. Then I had a chat with Jason while the resin set. Jason wanted to witness the blasting. When that had happened we had a little look at the result, but then we headed out. I was very cold and it was getting a bit late too.

When we came to Generator Chamber we found Jay, who was keen to go out as well. Before we knew it David and Don appeared too. Good timing! We went up. Jason offered me his jacket as I was shivering. That helped! I felt much better pretty much instantly. While we were waiting for the last people to come up the pitch Paul and Sharon appeared; the latter was fairly new to us. I trust she will have a look in our digs some day soon. It's never happened before that the people elsewhere in the mine felt the need to come get us!

Next week Miles can't be in the dig, and I'm sure the Dig 1 people will be elsewhere too, so no digging at all will happen. Too bad! But I'm sure we'll be back after that! We will have to see how our dig goes, and decide it it's feasible. If we can't go through this collapse we will have to dig upwards through one of the earlier chambers to have a go at the next level up. Even if we have to give up one attempt we are not defeated!
Posted by Margot at 09:14