Even though mine exploration in Britain is a hobby with a rather Victorian taste to it, this is the 21st Century, and internet plays a big role in it. We organise ourselves using a national mine exploration website. That site is also used to organise trips open to everyone. There was a trip announced in Liverpool; that’s not so far away! And the venue of the trip was a series of strange man-made underground spaces which seemed to have been a combination of quarry and building. Liverpool has very beautiful red sandstone, the Helsby Sandstone, (quite evident if you approach the city by train) which has been quarried for building stone.

Liverpool was the home of a rich tobacco merchant, Joseph Williamson, who seemed to have taken delight in taking modest quarried-out spaces and arching over them in dressed sandstone and brick. Nobody quite knows why; he seems to have not left any records. Since his death in 1840 they seemed to all have been filled up with rubble and garbage and whatnot. But in the past decades, enthusiasts have been digging them out. And we would go and have a look at what they’d uncovered.
It was the usual suspects setting off from Anglesey: David, Paul and me. We set off early as we wanted to be there by 10AM. We arrived at the scene, and Paul contacted his mate Chris, who had come to us to visit Parcmine, who was one of the Williamson diggers.

While we said hi to him we saw another car with Welsh mine enthusiasts approach. And another two, and a car containing Chris from theYorkshire bunch. Soon all we expected were there. We could go to the first site! Originally, all tunnels might have been linked, but they are not now. We would first go into the most recently excavated bit, around the corner.

We first got put into harnesses, and then given an introductory talk by one of the diggers. Then we went down into what was known as the Wine Cellar. And indeed, there was a wine rack in there! And lovely brick arching, and funny nooks and crannies, and artefacts. It was very nice! 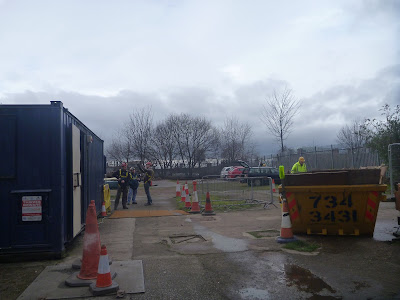 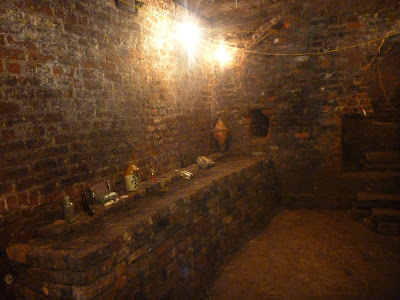 Interior of the wine cellar

After we’d all had all the time in the world to photograph everything we went out again, and went into the next bit. That was the bit we were wearing the harnesses for; the entrance was down a ladder of some 5 meters, and Health and Safety inspectors had demanded everybody is rigged to a tripod in order to negotiate it. Dearie me.

We first got into a room with an enticing rathole in it; I couldn’t resist and scampered to the end. All good clean fun! Then we went to what was known as the “banqueting hall” which was indeed rather impressive. When we got out we could get rid of the harnesses again; the other site, Paddington, was accessed via a staircase. 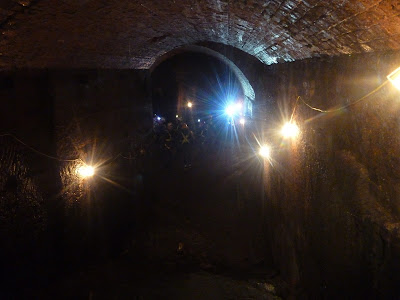 We went there; this was clearly the finished bit. Every excavated room was full of amazing artefacts. There was little logic to the spaces; one was unusually high and narrow; a bit like a church nave. We scampered around and admired it all, taking plenty of pictures. But the space isn’t excessively big; after a while I got impatient (surprise, surprise). I decided to say goodbye to both Chrisses, and go to the car, where I had a lovely flask of coffee I was craving. I had sandwiches and apples too. And even a newspaper Time to enjoy these! So I did. As a last bonus I got a NYMCC buff from (Yorkshire) Chris. Lovely! 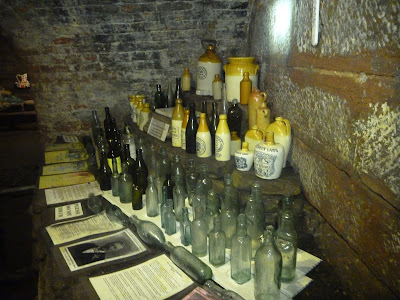 Artefacts in the Paddington site (just a few of the very, very many) 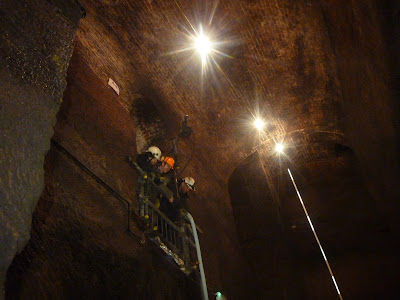 Looking down into the church-like space

After a while David, and then Paul, also arrived. Then we could go do the next leg of the journey; David had requested a visit to Crosby Beach, which is festooned  by a rather famous set of statues. I had heard about them from Hugh. It wasn’t far! Paul navigated me to it, and in the bracing wind we took a stroll. The beach looked nice with the sunlit sand contrasted by a slate grey sky. I wasn’t excessively impressed by the statues, but hey ho, now we’ve seen them. And I did enjoy the plethora of very happy dogs running all over the place. And without issues we drove back to Anglesey. A good day to mark my first proper weekend since the new job started! 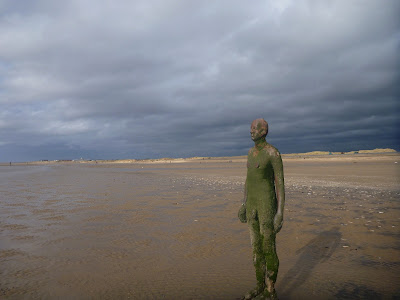 One of the statues
Posted by Margot at 09:25