The climbing club I am a member of, like most climbing clubs, climbs indoors in winter. We tend to go to the local climbing wall: Indy, three Monday evenings a month. The fourth Monday is for the bigger one in Caernarfon: Beacon. I had not been for a while; Beacon is further away and more expensive, so when you get there you want to do a proper evening of climbing. Work sometimes doesn't leave me enough time to make that work. I had bailed out a few times! But I had been the previous month, and had a good time. I had done some suitably challenging routes. And Beacon has more where that came from; the place really is big. This time I went again!

I started trying a route that wasn't classified as very hard with Eifion. He couldn't do it. Then I tried: it was hard indeed! It had a nasty overhangy bit that was hard to get past. Eifion kept the rope tight (we were on top rope) and with that slight bit of cheating I managed in the end, but my arms were properly pumped.

I then tried the wood route. Normally grips are made of some modern material, but Beacon has a route with only wood blocks and slats and such. I had been eyeing it since the first time I went to Beacon! Now I finally tried it. I couldn't get to the very top hold without a bit of help from my belayer but now I've tried it! It was fun. And hard work, again. My arms were so pumped they were lumpy.

I did a few slightly more easy routes but then Catrin, who I was climbing with, suggested going to the part of the hall with the highest ceilings. There she climbed a 4c, but that sounded a bit too dull. There was a 6a in the same place; I decided to try and lead that. It started OK, but I got to one point from which I really couldn't see a way on. I chickened out and swapped to the 4c.

When the rope was up, Catrin and Ika tried to climb the 6a on top rope. Neither could do it! The I  tried and neither could I. How have I ever tried to lead it? But by then my arms were done for the day. Time to go home! But it's nice to get to Beacon again once in a while. Although hopefully we will be climbing outdoors again soon! That would make anyone forget Beacon. Until next winter! 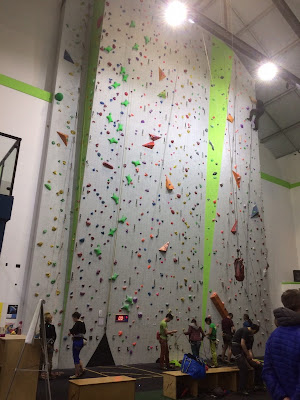 Ika and Catrin (left) getting ready to try the 6a
Posted by Margot at 10:15