While several of our group are a bit fed up with the dig, one of us was keen to get involved again. This was Llion; he is doubly challenged regarding Thursday Night trips as he has a young daughter and a girlfriend who works on Thursday nights; he also temporarily lost his driver's licence to an ill-judged traffic decision. And he lives in a village where nobody else comes from so he can't just hitch a ride from someone else. If he shows up it has to be in the Blaenau area, with him taking the bus to the meeting place, and asking someone to make a detour to bring him home afterwards. And this week he had a babysitter! The official Thursdaynighter trip went to some place far from Blaenau so he was coming with me, in the dig.

I had been a bit nervous about driving up, as the forecast was I had to go straight through storm Doris. On the day itself, though, it turned out the worst of the storm raged in the morning. I got there without problems! I got ready and waited for Llion. The we walked up. Llion hadn't been since last year!

We got to the silent pitch. Had the generator run out of fuel? I went ahead, found the generator empty indeed, so I filled it up and started it again. Light! Then I went to see if Llion was alright, and went through to the end of the dig. I found Miles on his own. He looked tired! He had been in all day and moved tonnes of rock. He was now just about to drill some more holes.

Llion appeared. I suggested I do the drilling while Miles had a coffee. That idea was well-received, by Miles, at least; at the drilling stage there tends to be work for only the driller, and then for the charge-placer and resin squirter. The resin has to set for half an hour. Only after blasting would Llion have something to do! Oh dear. And this day it took extra time as we were running low on resin and still struggling with the uncooperative resin gun. I was doing my usual scampering looking for bits such as resin, the other resin gun, and nozzles. Luckily we could do two rounds (Miles had two drillholes ready before we came) so from then on, there was plenty to do. I ended up bringing blocks down from the ceiling; the rock was quite cracked but not quite shattered, so it needed some persuasion to come down. Miles removed what I brought down and Llion made a nice causeway in the rather wet level.

When Miles went home (he lasted quite long considering how zonked he already was when we got there) I swapped places with Llion. He did some chipping with the breaker and had a whale of a time. We got a lot of stuff out of the way! And I was aware of the next working day and didn't want to start our way back out later than 10PM, but it was quite tempting to keep going while the going was good. Llion was very polite and willing to come out at any time (the other option would be walking home) but I think he is hooked now. And he hasn't even seen the other dig!

I'll be back next week! With our without Llion. It might get exciting... 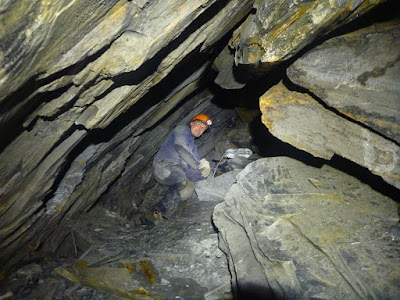