If you don't have to work during the weekends, you might as well go underground. Our normally rather inert Paul had woken up and suggested a trip to Moel Fferna, a mine I had only been in once; quite recently, with the PCG. It merited another visit! And not only would we have another look at this mine; two of our men who are notoriously busy suggested going for a curry afterwards. They couldn't join us for the trip but they could gather in a nearby curry house.

As it was a Paul trip we didn't gather all too early. We got to the meeting place and found Ali there; he had Moel Fferna as his pet mine so he swould show us around. Seconds later a chap known as Lazy Jason arrived; we already have two Jasons so we'll stick to the full moniker. He had been joining us a few times but his punctuality (or lack thereof) and my impatience had meant I had always already vanished into the dig by the time he arrived.

We drove up and changed. When we got to the entrance pitch we recognised something; we had seen a trip report on internet from some people who were rather infamous in mine exploration circles; the guys had a disregard for safety that shocks even me (they would go underground without hardhats - I wouldn't dream of that) and they were infamous litterers. They weren't very polite either. We recognised their homemade electron ladder in the entrance pitch; it didn't look all too safe. I am quite resigned about such things but the men figured this was a downright menace and a hazard to any passing youngsters with a sense of adventure who would potentially be tempted by this ready-rigged entrance pitch, not being able perhaps to assess the safety of the set-up. David untied the thing and with combined forces we hauled it up and out. We would use our own rope!

We got in and took our SRT kit off. Time to explore! We took our time at the various sights around, such as a hand pump, a manual winch, and some graffiti. David took pictures. With a handful of us he could light up the rather large spaces. It was nice! 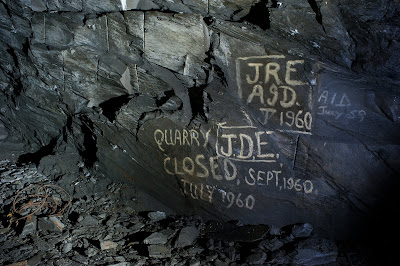 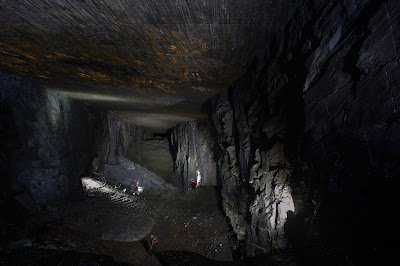 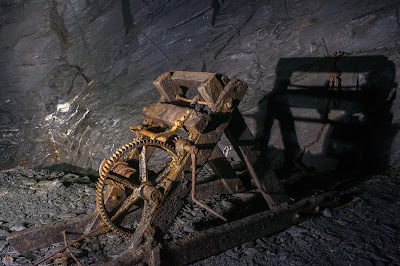 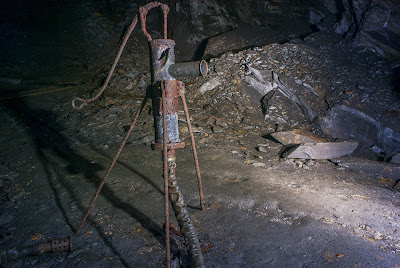 
When we got to the Cog we sat down for lunch. I also went for a leak (I had quite some coffee and tea with me), and that brought me to the manway I had explored (to a certain extent) with the PCG. After lunch Ali showed us where that manway came out; we could have gone through! We went in another direction though, an explored some bits that evenAli had not seen, I think. There was some scampering and getting muddy and losing Paul, but in the end we all came up to the original level again. I was glad; it was time to come out! We still had a dinner to do. And I didn't want to be home late; I hate it to start the week already unprepared and tired. It gets bad enough on Monday!

I tried to get the men to be executive and finally we were on the road again. When we had signal we saw that Phil and Simon, our dinner companions, had already decided on a venue. They wouldn't wait for us! David, who was driving, put his foot down and we managed to get to the restaurant only a few minutes after them. Briony was there too. It was good to see them! I hadn't seen Phil in ages. He had been moving house. Altogether it was 10PM when we left. Too late! but at least it had been a good day. And David's pics would turn out magnificent!