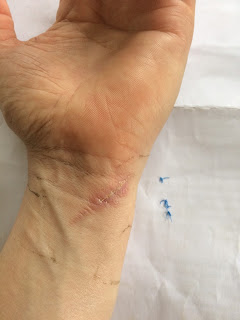 When I had my wrist stitched up I mentioned to the lady who was doing the stitching I thought it'd be nice to take them out myself when the time had come. She disagreed; she said you needed sterile scissors for it, which I was not likely to have. True! It still seemed silly, though, to go and bother the NHS with my puny three stitches; they have better things to do.

I had had surgery once (before the blog), and I had four stitches in the wound, if I remember correctly, the physician who took them out did the first one himself and let me do the rest. There's not much to it! In spite of the advice I was given I was still tempted. I later asked a medical person in Welsh class if my GP would even know I had stitches; she confirmed they would. The hospital would have immediately notified them. Oh well. Let's go with the protocol then!

I got me an appointment to get them out, but then on Saturday I found them unpleasantly itchy. The wound had clearly healed sufficiently for the stitches to come out, but my appointment wasn't for a while. And the stitches snag behind things! I figured I was better off without. I took them out at the kitchen table. It felt better immediately.

On Monday I phoned the GP to tell them that. They didn't seem to mind! And I now have a nice smooth wrist without blue wire sticking out of it! The scar is still a bit sensitive but soon I will be back to normal. And in great shape to try to get back to chamber X, where it all started!
Posted by Margot at 09:24