Someone wanted to go to Rhosydd on a Sunday. I had once been; I had done the famous Croesor-Rhosydd through trip. That meant we got into Rhosydd from the inside, and basically walked straight out. But now there evidently was an opportunity to have a proper look around! That sounded good, and it sounded even better when regular David mentioned he wanted to try some rope pitch of which he didn't know where it lead to. Rope pitches and the unknown; all good!

David picked me up from home. We drove to the Cwmorthin parking lot, and met up with the others. Some I had never met before. One was dropped off by his wife and their 4 month old Border Terrier. That was nice! All kitted up we walked to the lake at Cwmorthins entrance, and along it, and out of the valley on the other side. It already was a great walk! These abandoned industrial valleys, with no habitation, but just fields and rivers and ruins and sheep, are amazingly beautiful. And then we got to the entrance! 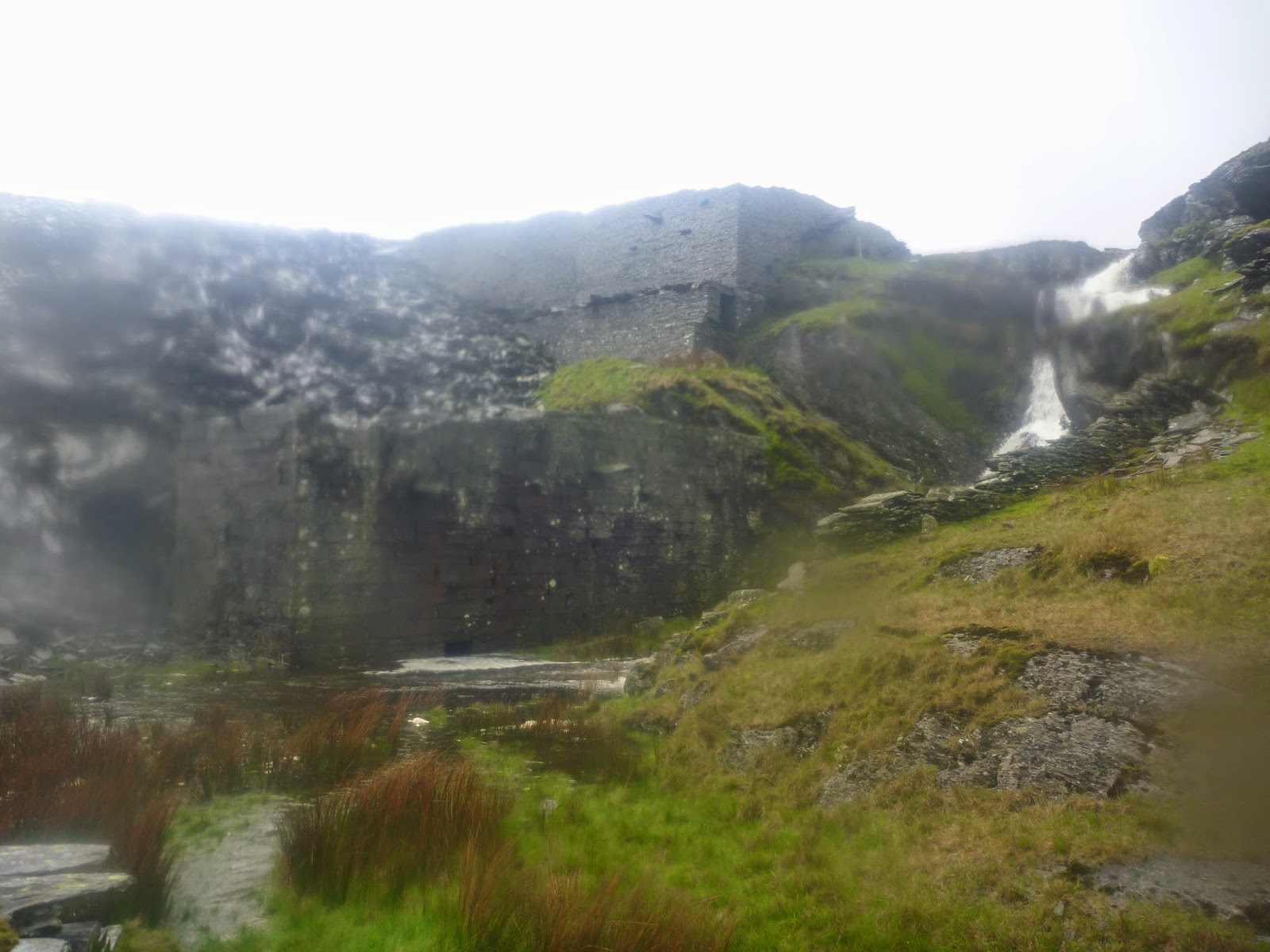 We had a bit of a walk around. It was quite nice! We scampered up some inclines and walked through some gaping chambers, and had a generally jolly time. And soon we came to where on the through trip we had come out. A big chamber with daylight flooding in. That was where the rope pitch would be. And indeed! We carefully clambered up; the pitch came past all sorts of iffy lumps of rock that were considering coming crashing down, but we all came up without issues. 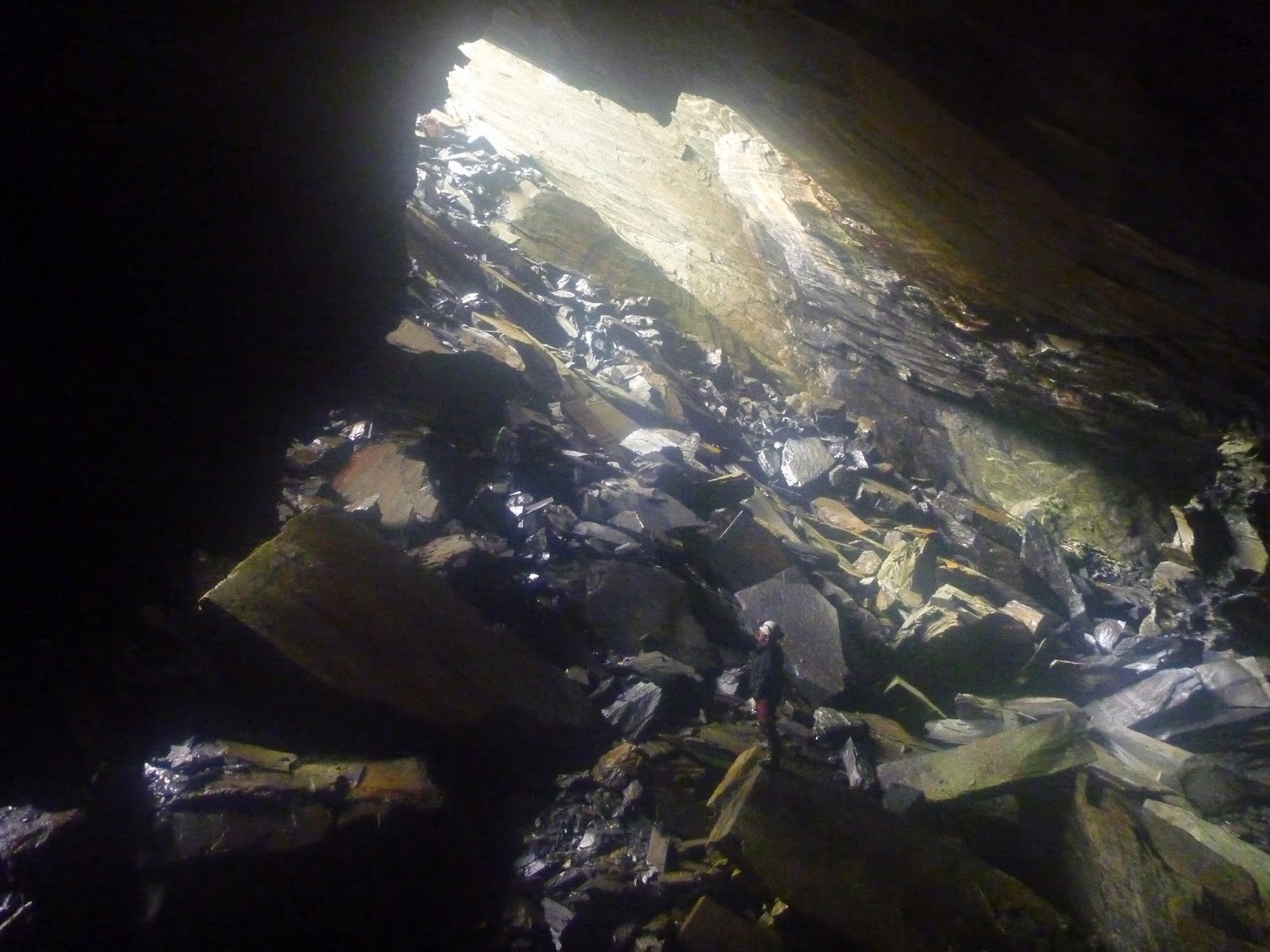 At the top we found a nice wheel on a short incline, with at the top of the incline a small, rather iffy level leading off to a half-collapsed valve chamber. Very nice! After having taken some pictures we came down again, to find the others having lunch. 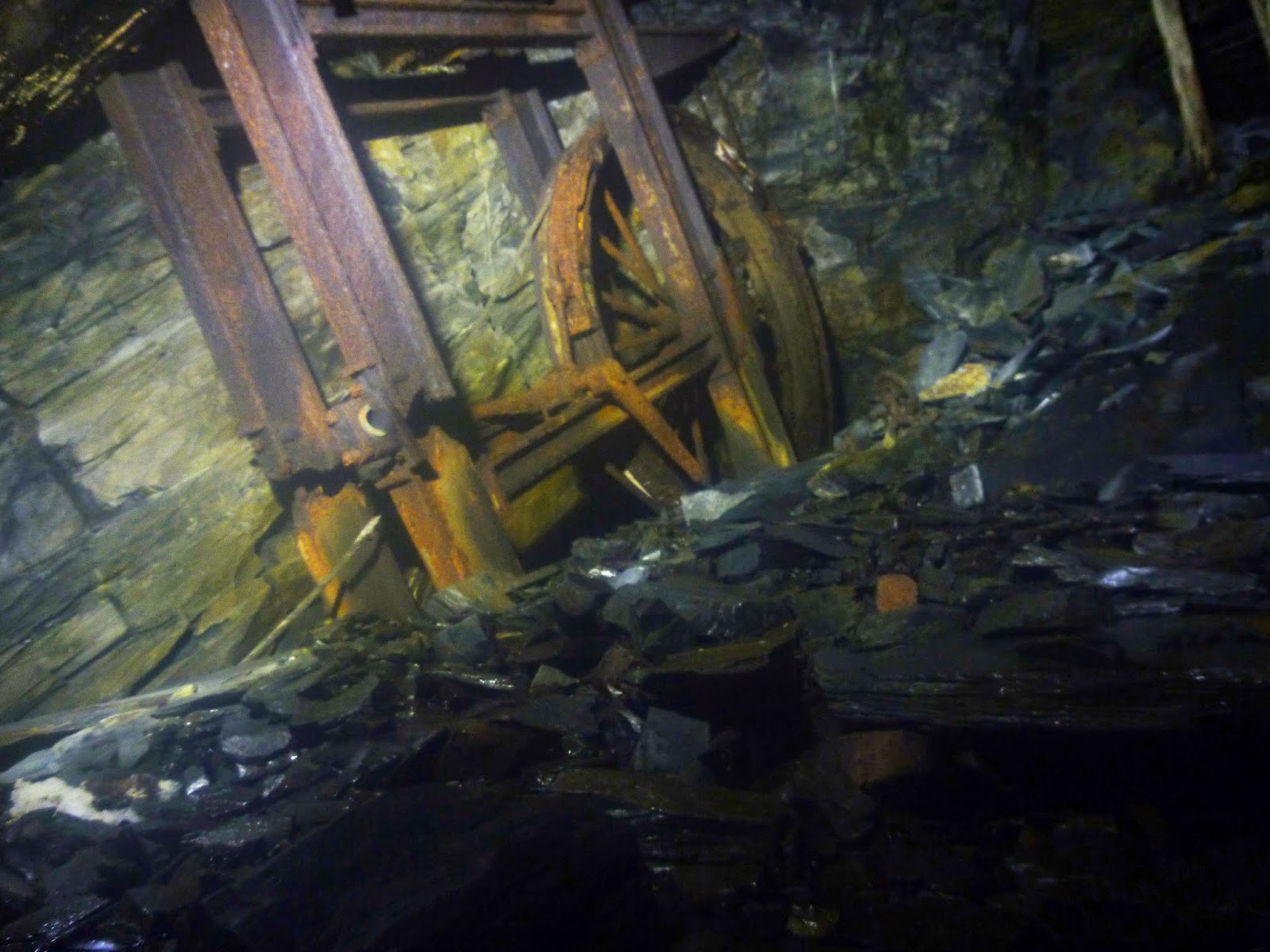 The winder we found at the top of the rope pitch 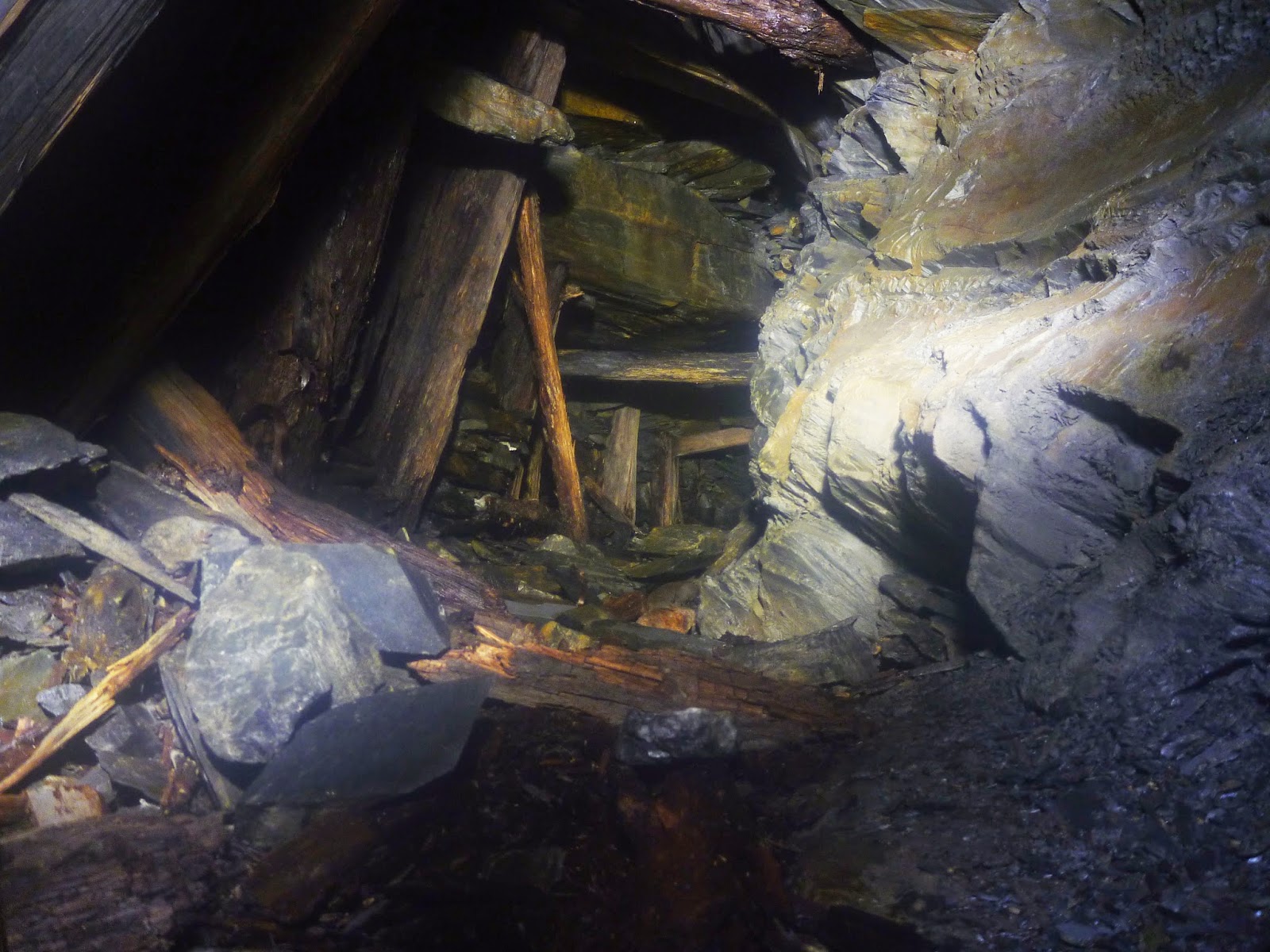 The somewhat iffy level at the top of the incline 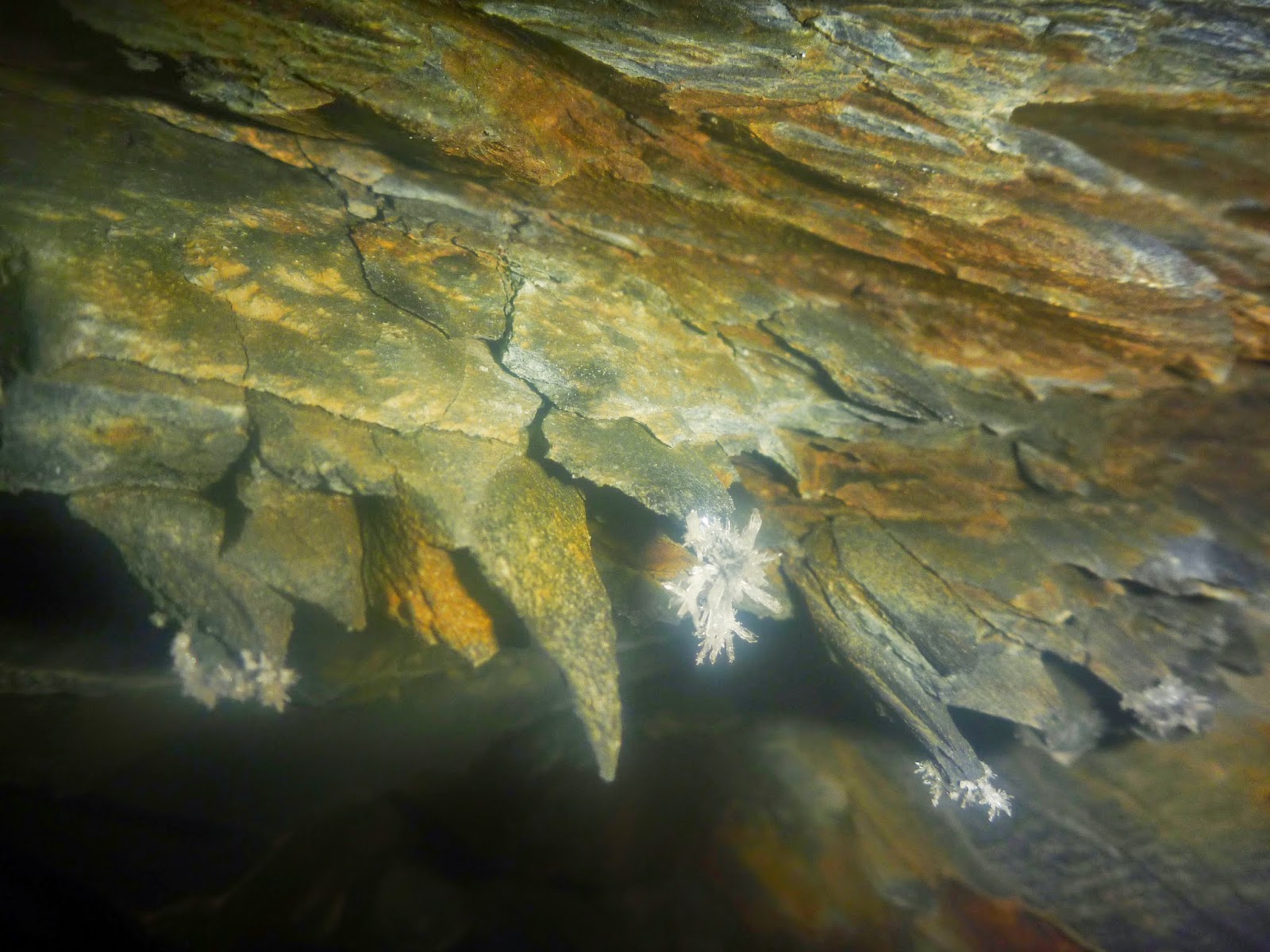 Some very cute little crystals at the top of the pitch

We decided it was too early to go back; we would have another scamper. We first went down, to find a lovely flooded chamber with a level leading off in the other direction. Enticing! We should go back one day with wetsuits. These chambers are terribly deep and cold; not a very good idea to just chance them in"normal" clothes. After some ogling of these uncharted grounds we tried went back up, trying to get higher up than any of us had been. We came to a chamber that was so huge we figured it may originally have been two chambers, but which the in between bit collapsed. With a few we tried to find a new way out, and we did; evidently, not many had, as we found a little chamber with the hobnail-boot footsteps still all over the floor. Very nice! 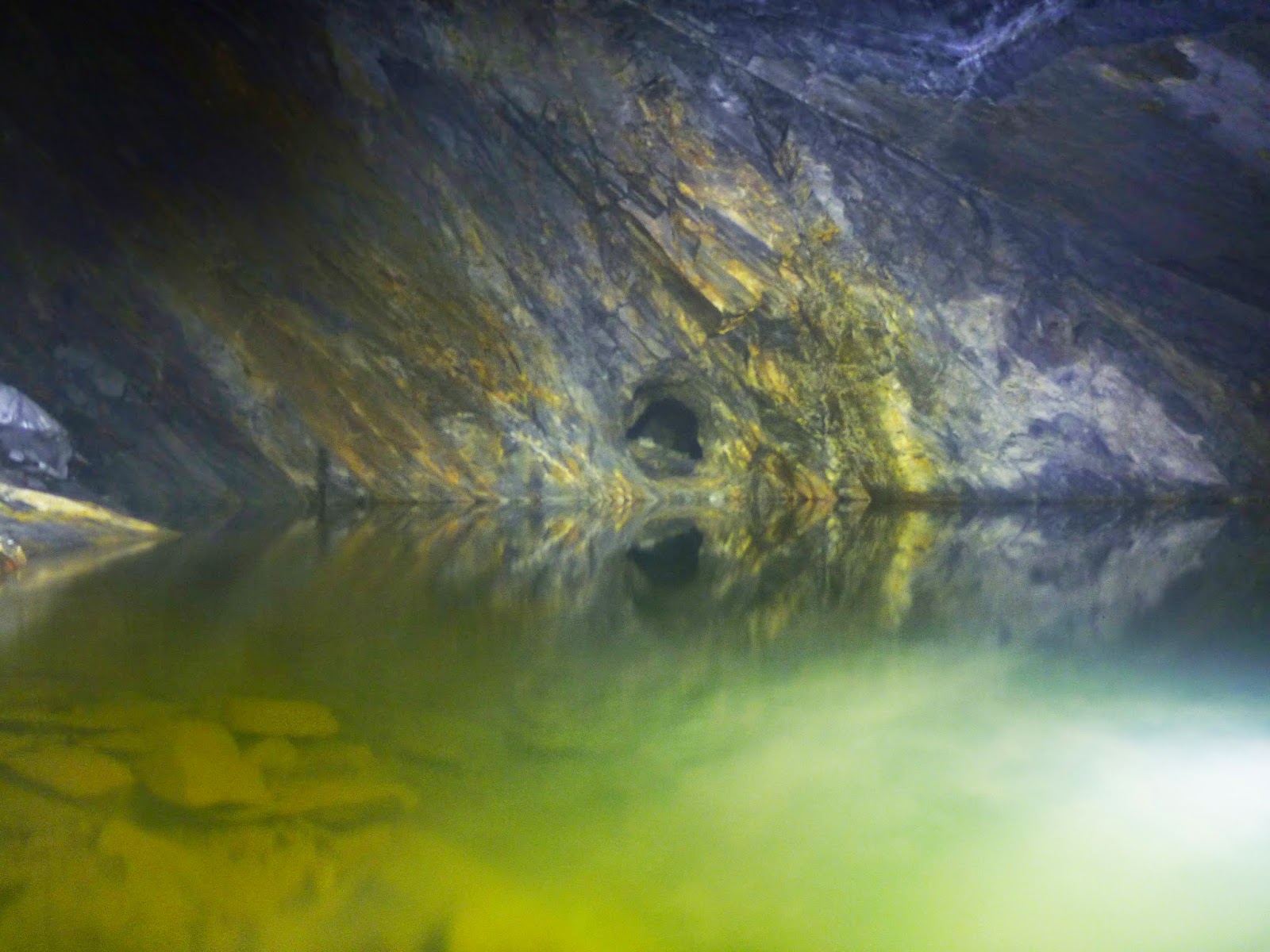 I want to go back and see what's on the other side! 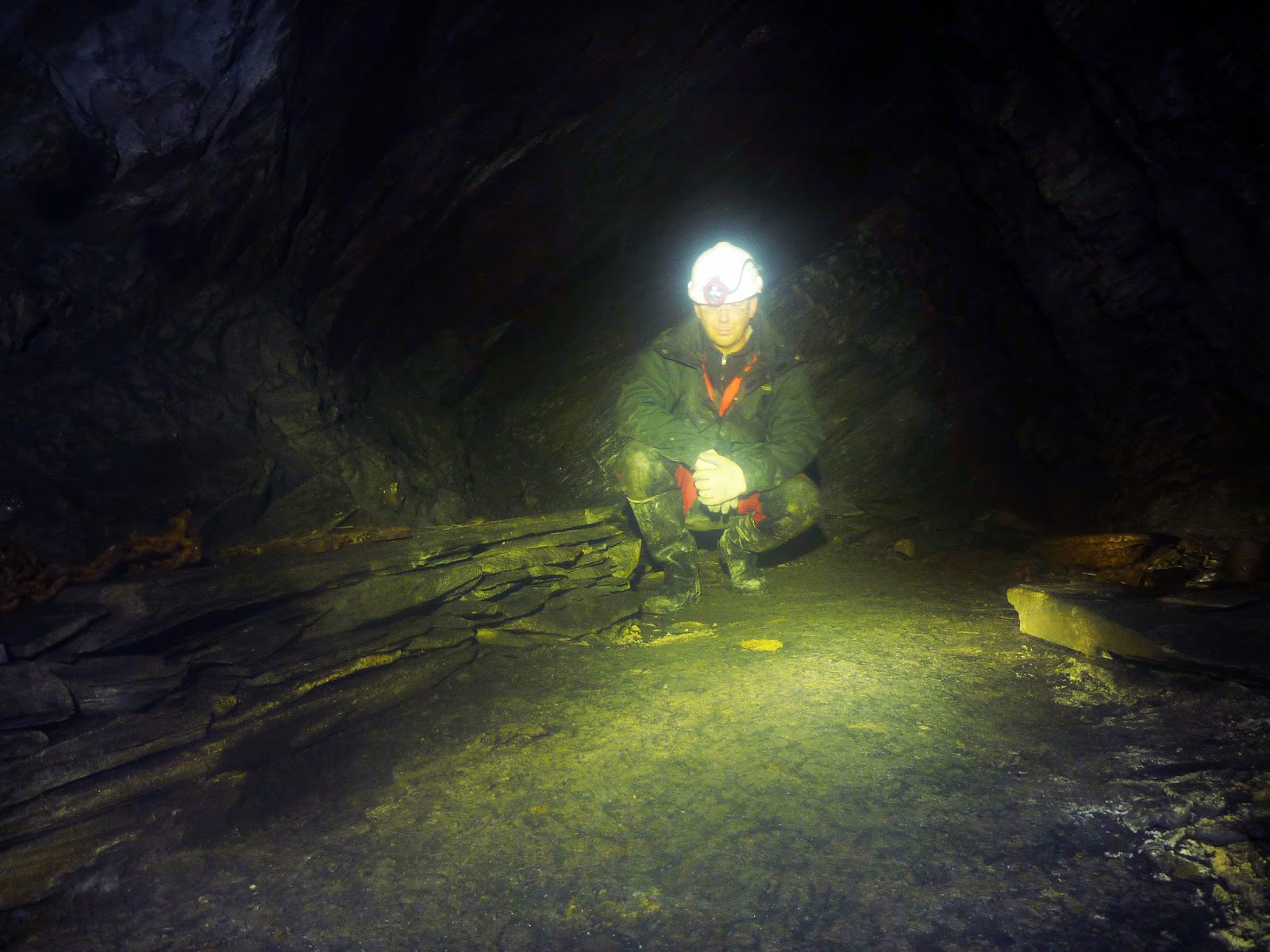 The hobnailed boot footprints, albeit not very clear

When we had all come back together we decided to go back out. Late enough! We walked the beautiful road back, and were greeted again by the juvenile Border Terrier. It had been a nice day! And I should go and repair my wetsuit (which has a big gash in it), and see if I can convince people to go back and check that flooded chamber! 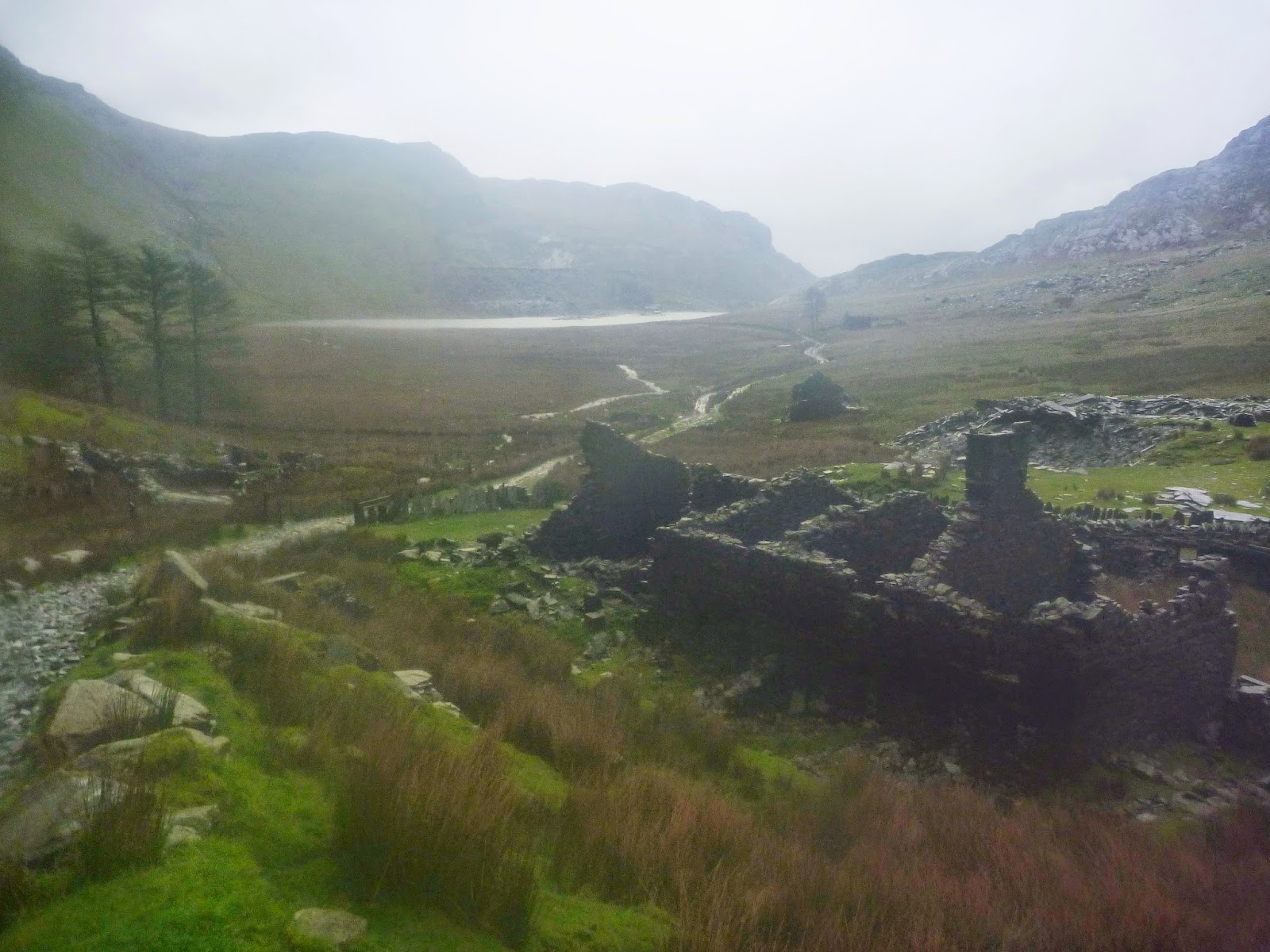 Cwmorthin valley, and its lake
Posted by Margot at 13:08