I hadn't really recovered from last week's underground trip. I had been home late, in a week when I had got up early for my run rather often, and work was hectic! That tends to do me in. But I was still keen to repeat the exercise. So much unexplored territory lay waiting for us! So on Thursday we went through the usual routine of assembling the Anglesey contingent and driving to the meeting point, all bristling with excitement. And there a chap that some us of already knew showed up. He didn't do SRT! Oh dear. Now what? No way you could get to our exciting finds without dangling from a rope. And he had come all the way from the USA. We could hardly tell him to amuse himself while we vanished down a hole! So reluctantly we decided to leave our rope kit behind and all stay on the level we would come in on (where I had previously been with the PCG). It was a disappointment, but at least I figured we would get out earlier, and I would not be in bed so late. But I would have to think again.

We went in and walked along the main stope. Soon a hole in the ground was seen, of which I didn't know where it went. I checked! That is the advantage of staying in familiar ground; you have the time to check out odd nooks and crannies. The hole lead back to underneath the false floor we had come on, but only for those who were willing to clamber over a pile of rotting wood that had come down, and of which it wasn't clear what it was resting on. I gave it a miss! We continued along the stope.

Soon three of the men were doodling behind. I took some pics to keep myself busy. We also tried a few winzes going up, but you never can go far; you just end up in the stope. But we had some clambering fun, with the apex when I was standing on some rusty piping, with Paul more or less standing on my shoulders, and Dave handing us my camera and his torch so Paul could take a picture of the stope. Good, responsible fun! 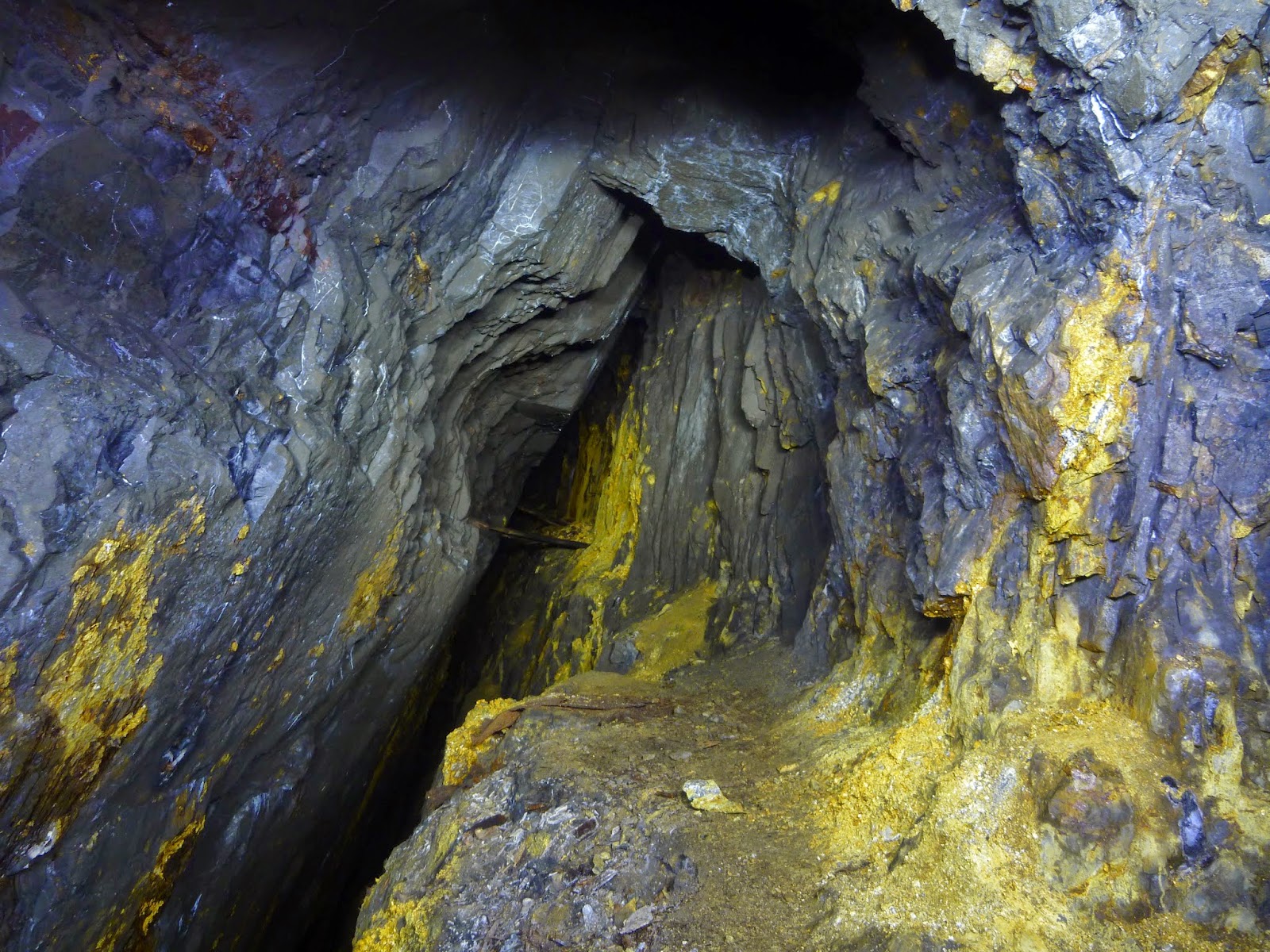 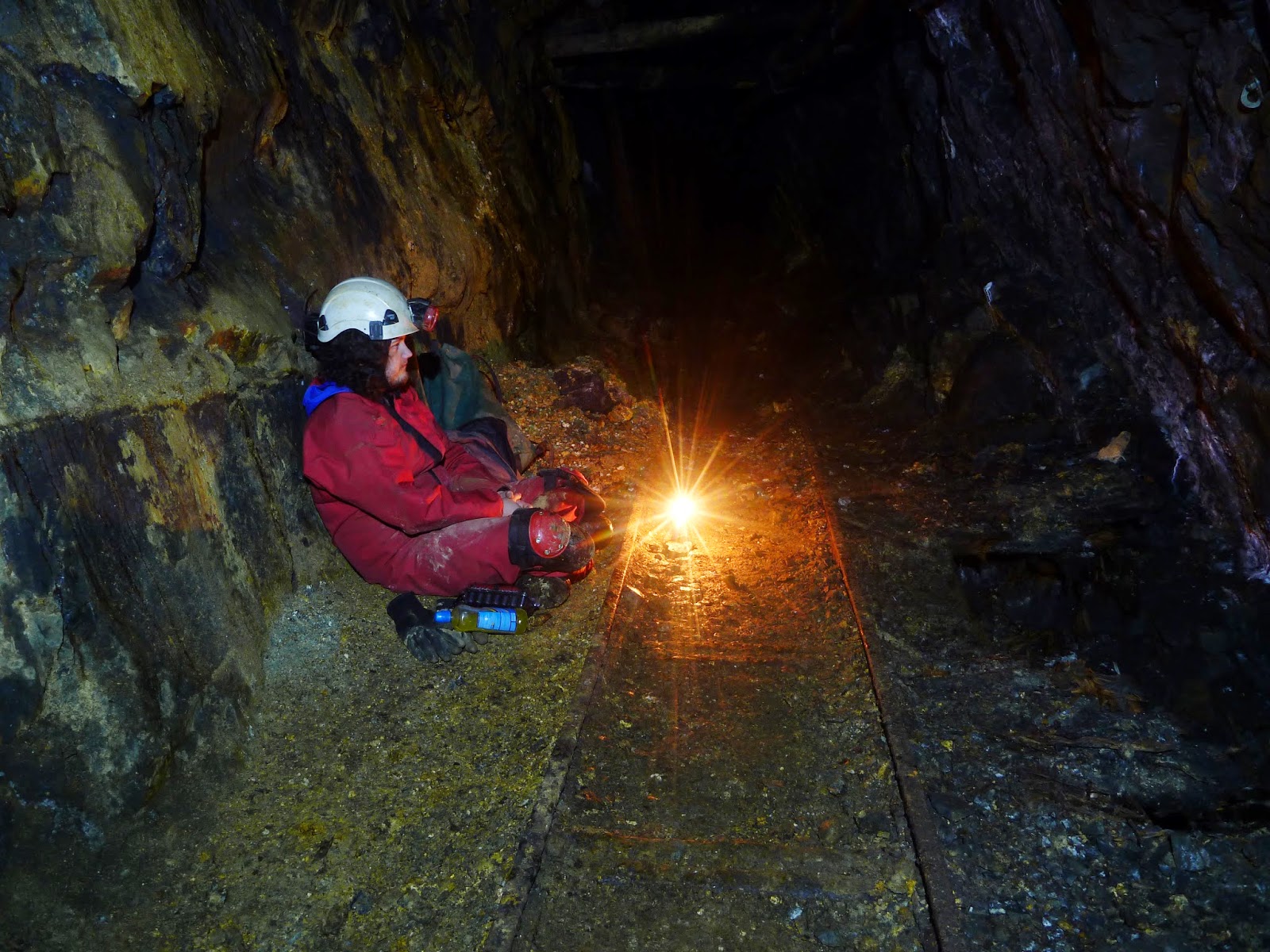 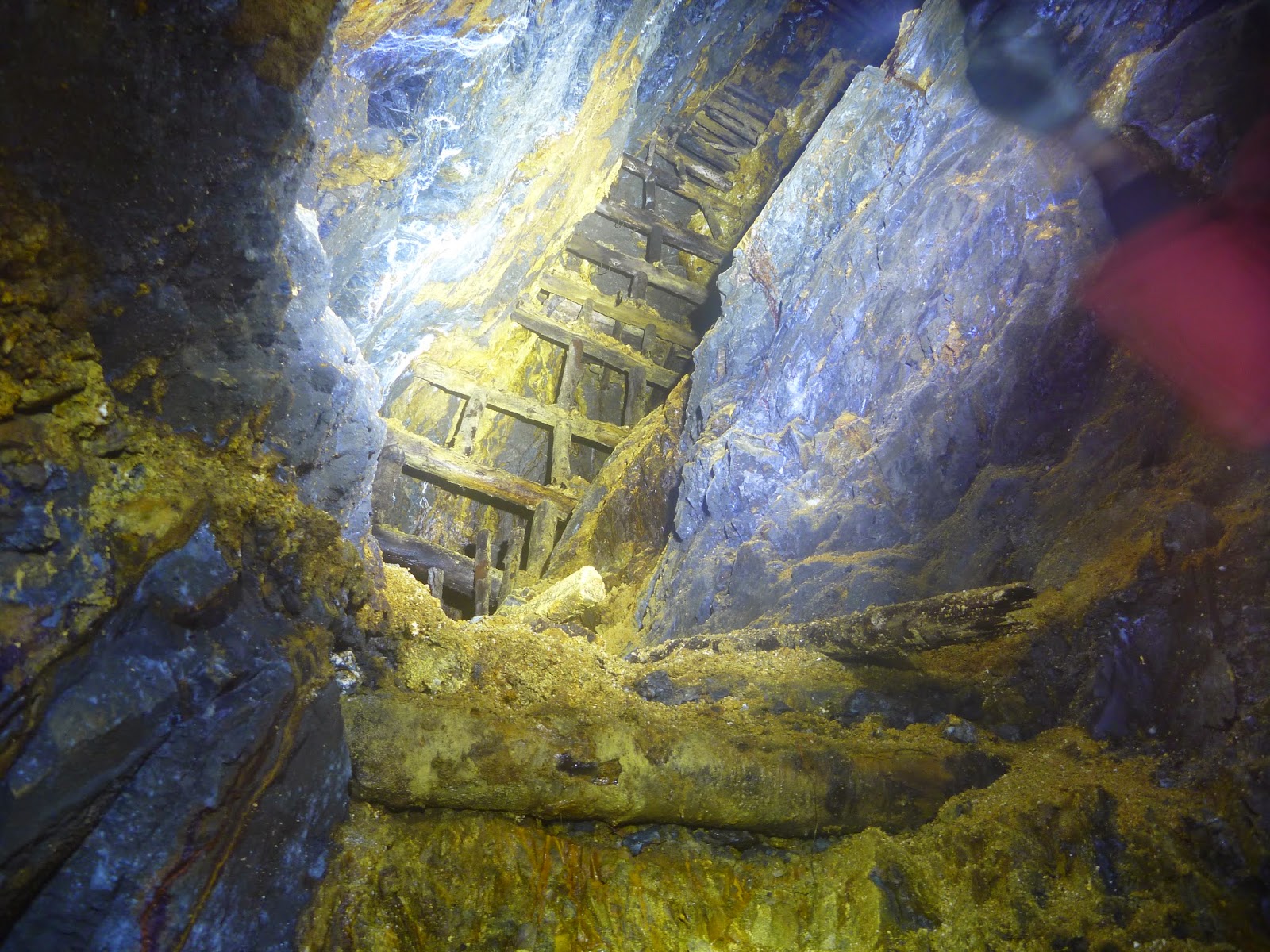 Amazing timbering in the stope

We continued. We briefly checked out a passage leading off to the side, but that was collapse-a-gogo, so we didn't venture far. At last we came to a crawl leading to a ladderway going up. I knew there was a flatrod at the top, but I had not followed that to the other side, where there seemed to be a balance bob. So eager for some new ground I clambered up. And slithered past the flatrod. And came out on the other side! I was followed by Dave and Phil; the others didn't like the look of the ladders, and started making their way back.

It was a beautiful shaft, with big pipes and rods and whatnot. A flatrod is used for transport of power, and power, in a mine, is often found at the top of a shaft in the shape of a team engine or a water wheel. You can use that power for hauling up the ore, but if you can cart that out through the side that's easier. You might still need the power to drain the mine. Hence the big pipes! Why they clumsily transported some of the power to another vertical opening a few tens of metres away I don't know. But they sure did.

We pootled around a bit, took some pics, admired some of the wildlife that must have fallen down an opening in the capping of the shaft (some 3 toads, some 8 frogs, and a cute little newt) and, when it came to the men, discussed at length how the whole construction must have worked. Then we went back. With the newt in bubblewrap in a bag! It was going to be saved. We didn't have many suitable amphibian carriers, so we had to be selective, and I had only once seen a newt before in my life (also underground!), so I suspected it of being a lot rarer than the frogs and toads. I was back at the main level past ten. Time to get out! We weren't doing anything spectacular, so it wasn't worth getting to bed very late for it, and being a wreck at work on Friday. But the men were lingering. I walked on, and found the other two. I told these too I wanted to get out. But soon I found my self all alone near the entrance. Hints clearly didn't help! I walked back, and told all of the men in no uncertain terms I wanted to get out and go home. I couldn't leave without my passengers! It barely helped. Soon I found myself alone at the entrance again. Tsk! 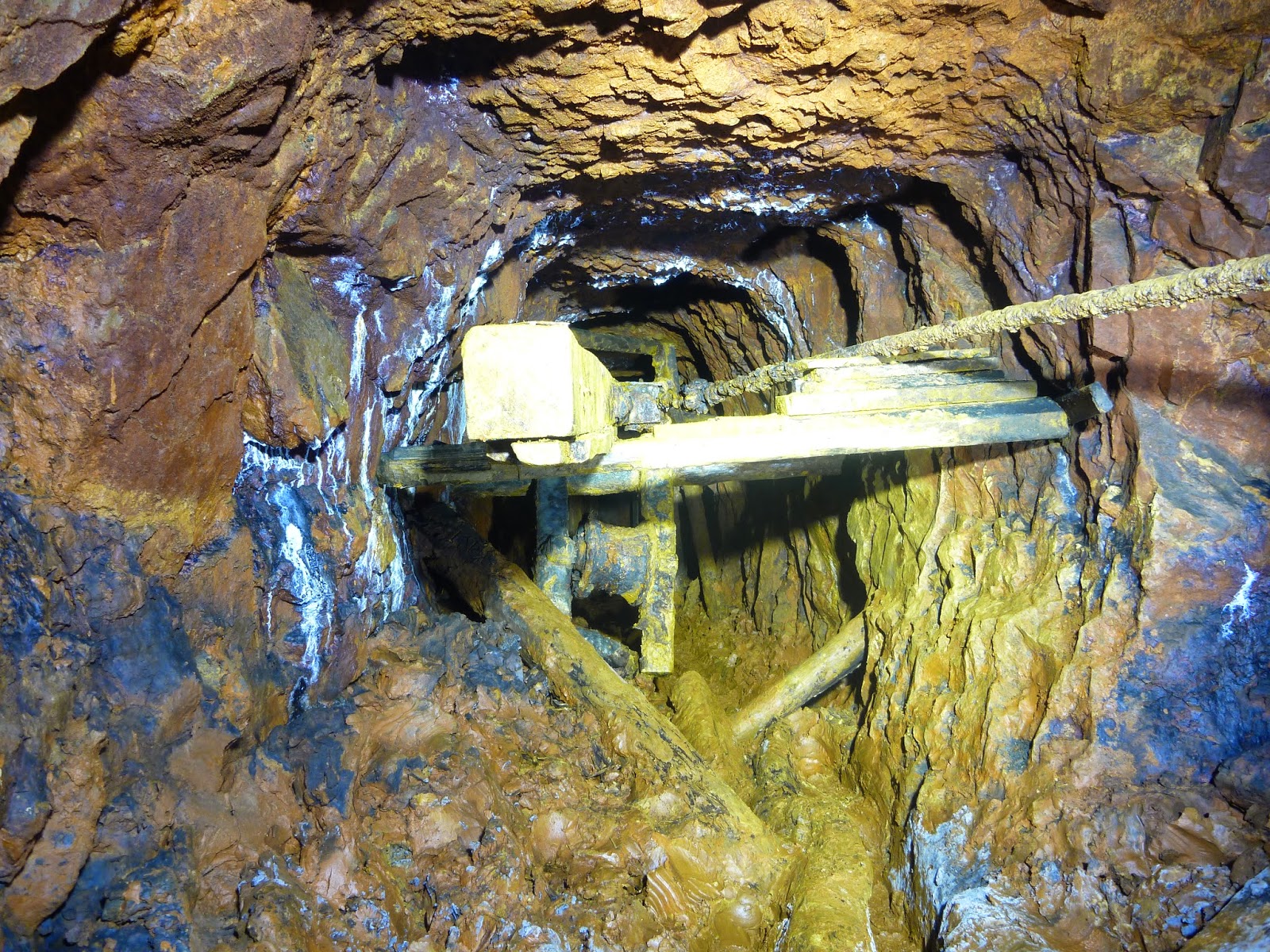 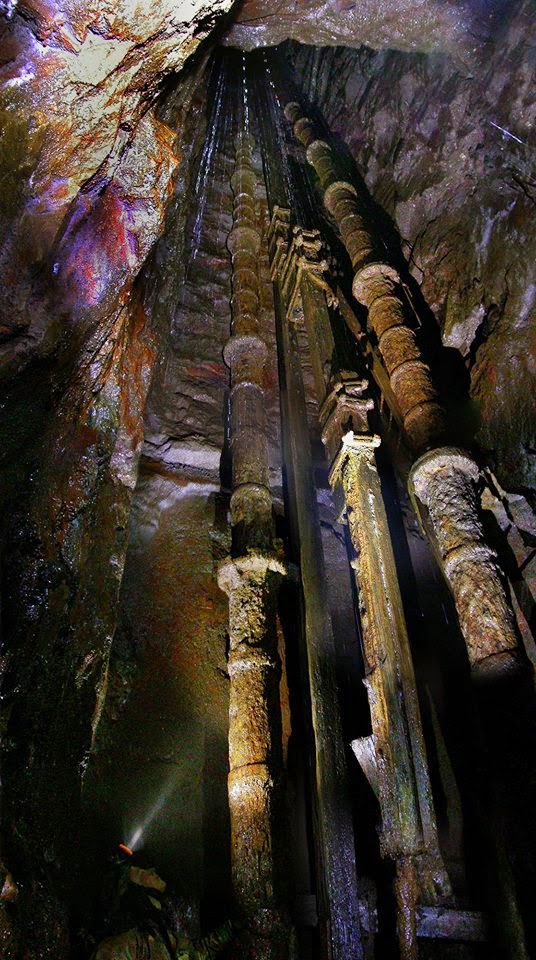 The shaft with the rod and the piping. And all the amphibians, but these are not in the picture. Pic by David.

When they finally appeared we first had to find the newt a new home. I had scouted a puddle nearby. It seemed content! Then we went back to the cars and got changed. I had to keep harassing my passengers as they were keener on checking their email and exchanging long goodbyes to the American than on getting ready to leave. But finally we were off! As is becoming a tradition Dave shared his bananas with the whole car. And around midnight we were back at the School's parking lot. Let's hope next week nothing comes in the way of our explorative plans! 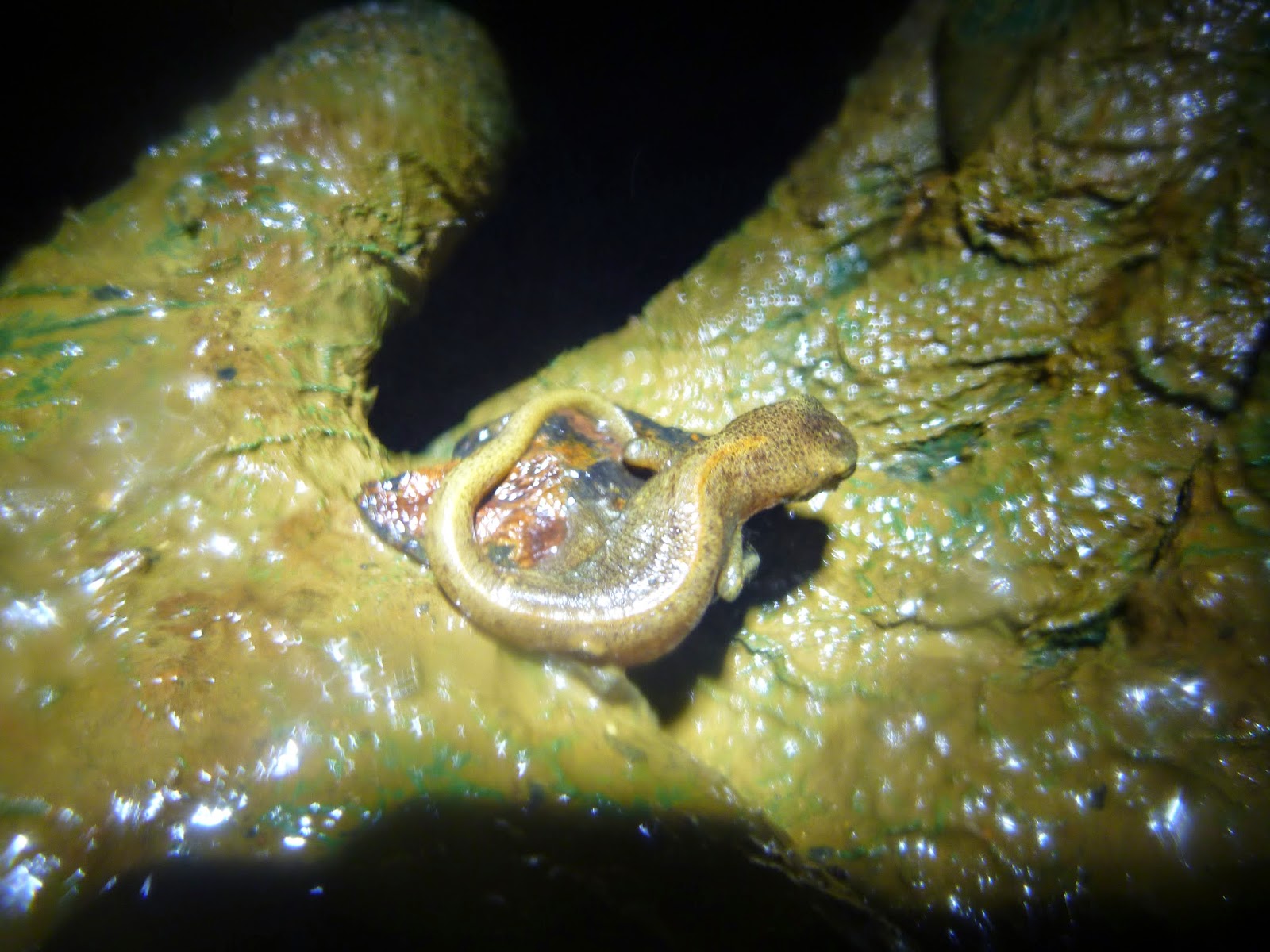 Our newt guest
Posted by Margot at 07:52