This was a week for visiting mines I'd been before I'd moved to Wales! We'd done Rhosydd on Sunday, and we would do another mine I'd done on my lasst PCG Wales trip on a Thursday night. There initially was talk of all sorts of people joining us, but in the end it was just five of us. Four regulars and a chap called Rob. We thought we might go down a ladderway and have a look at the lowest level that wasn't flooded. Sounded fine!

We got in and reached the junction where, with the PCG, we had gone right. I thought we would again; I thought we'd do the same ladderway! But no. We went left. To a laddered winze, rather than the rather exposed ladders in the middle of the lode. The winze ended in a drop with no ladder; there was a handline, and there were metal pipes going down. I decided to just slide down the pipes! That was fun. 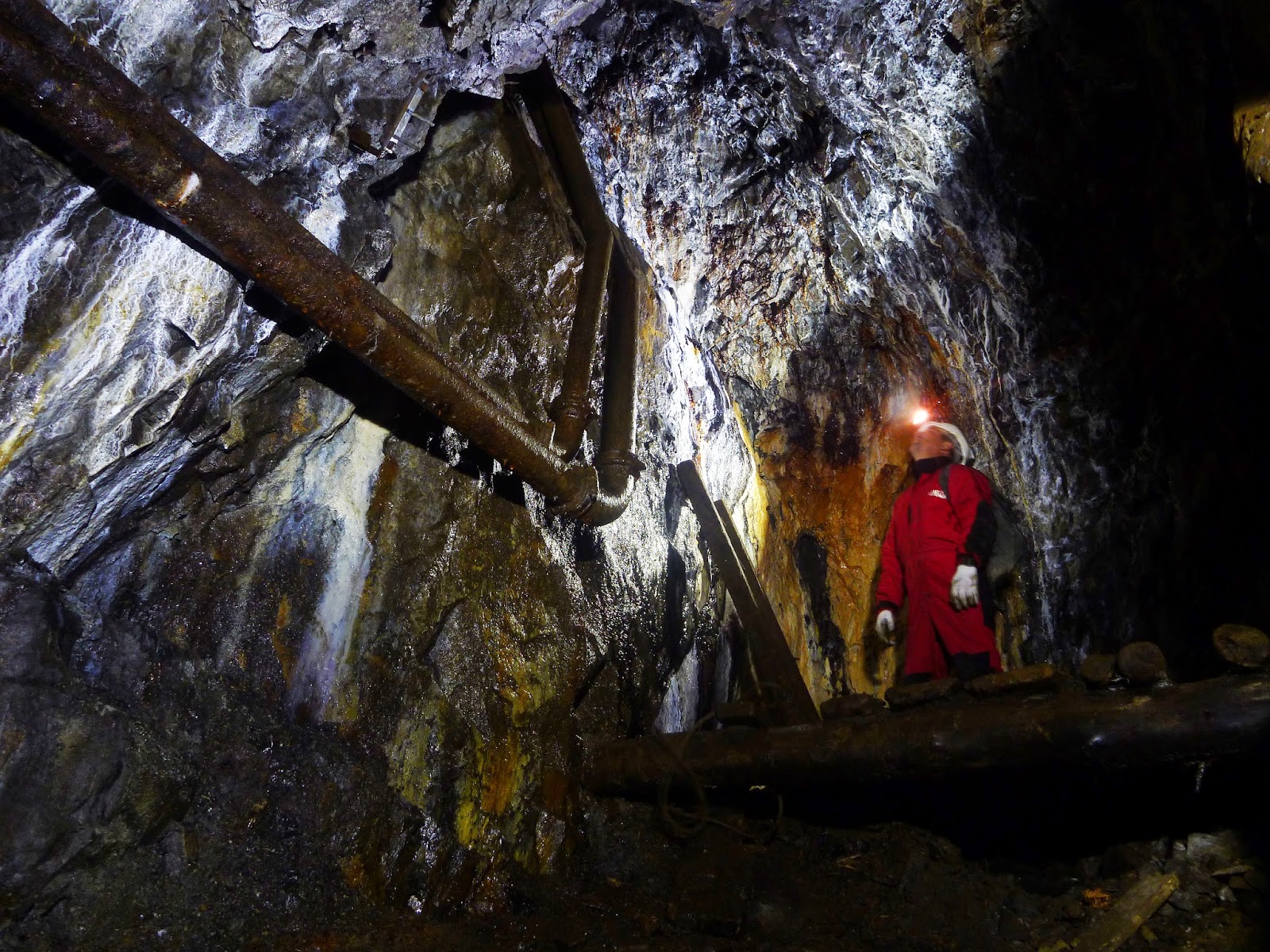 Phil looking up the winze, where Paul is considering his options for coming down

We then dropped down another winze, which ended in an ore chute, or in other words: a slide! That was fun. Then we were at the level we had aimed for. And we took a walk. Rather soon we found a level that started to slope down. The incline was flooded, but Dave shining a torch in showed there was a wagon in it! None of the chaps had noticed that before. 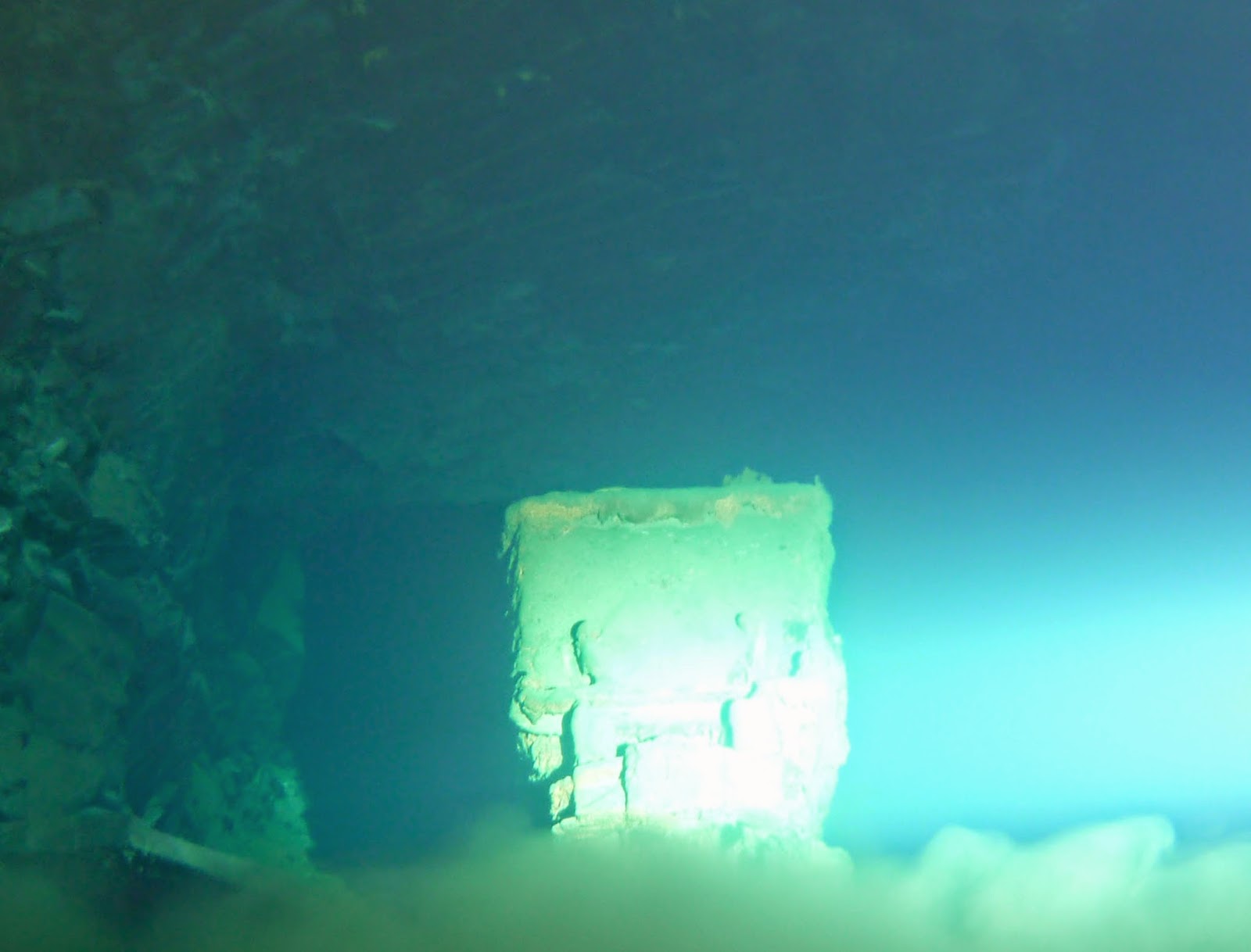 Further on we found a row of chutes that had lots of water coming out. We clambered up there, finding some more terrain unknown to us (all of it unknown to me!) and lots of fun was had. Dave suggested we'd walk to the end of the adit, in which the water gets deeper and deeper, and then go back out, so we did. 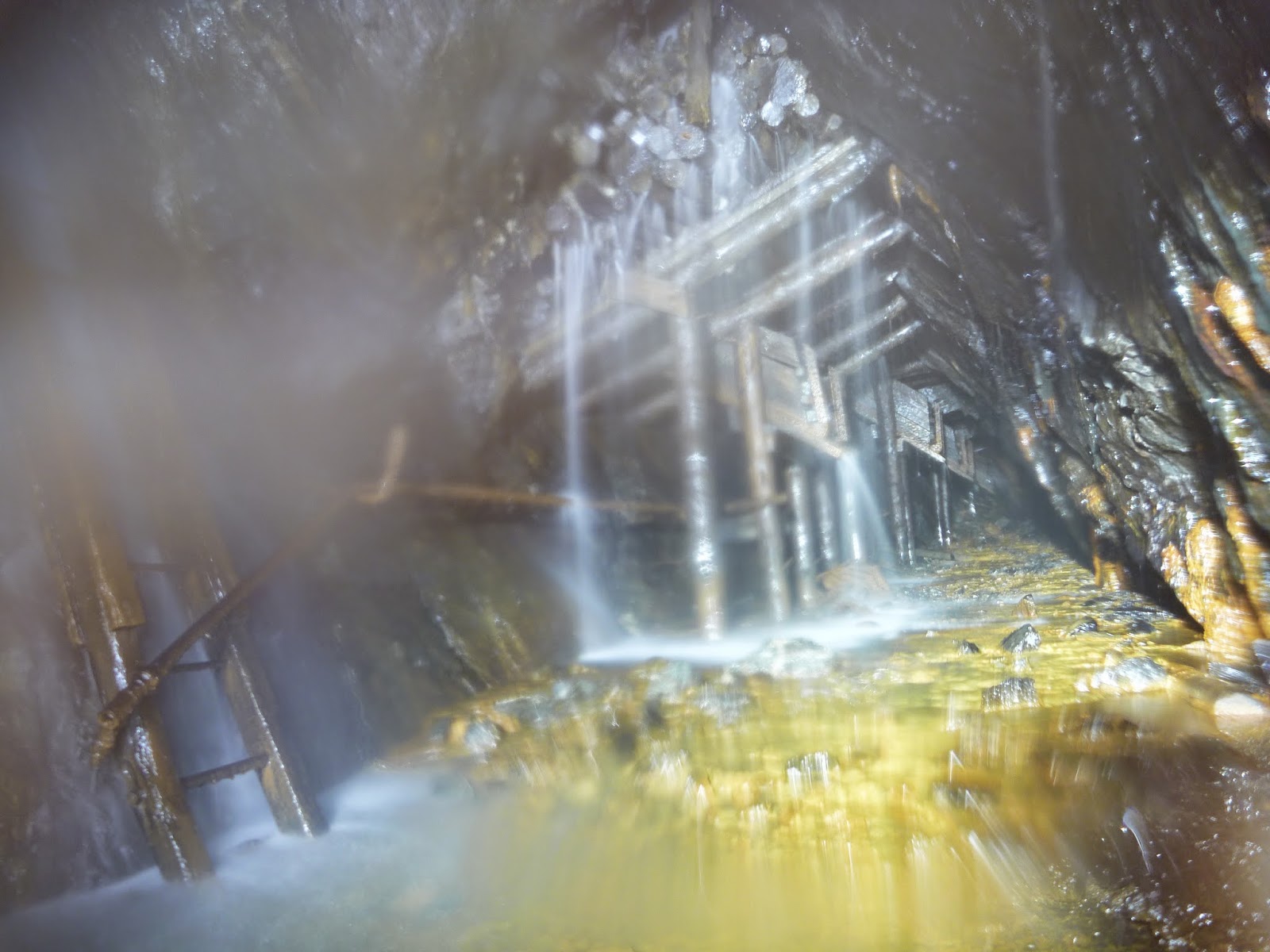 I saw daylight at the end. I wanted to check that out! I walked in. Most of the men had kept their feet dry, and weren't very keen to follow. Paul, who also wears low boots, followed after some hesitation. The daylight came from a big hole in the ground, probably originally a main entrance of the mine. Nice! I also saw bricked-up, but breached, passages to both the left and the right, but I knew there were people waiting for me, so I ignored them. I reported back what I had seen, but then Dave wanted to know what was behind these brick walls. Well, if you WANT me to have a look...! Paul didn't want to come along; he gave an evaluation of the apparent temperature of his sensitive organs and saw no reason to lower that value even further.

I tried the one on the right first. It was a small hole, high up in the wall. It was a bit awkward to clamber through! Maybe best nobody was watching. But I managed, and had a look; it went on for quite a while.I didn't try to find out how far; there, after all, were people waiting. I went back to try the other passage. This one lead into what the Cornish call a gunnis (the Welsh doesn't seem to have a word for it): a lode that reached the surface, creating a narrow, steep, man-made ravine. Behind the gunnis a passage went off, but you couldn't go very far, as only metres further it was all flooded. So I went back! My report excited the men, and we decided we would go back the next week, to have another look. I look forward to that! But now it was late; time to go back out. We clambered back out. 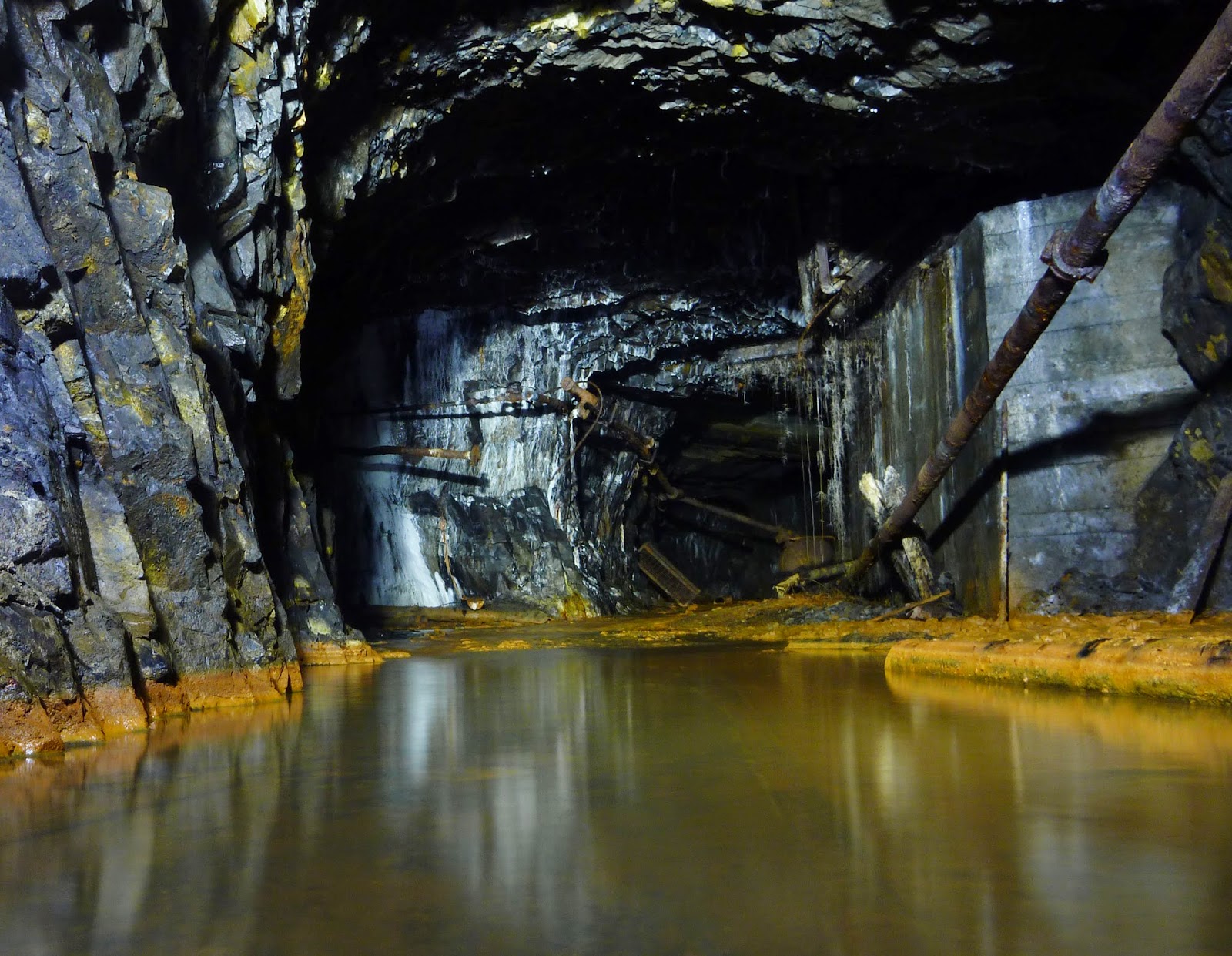 View from the ore chute-cum-slide into the level 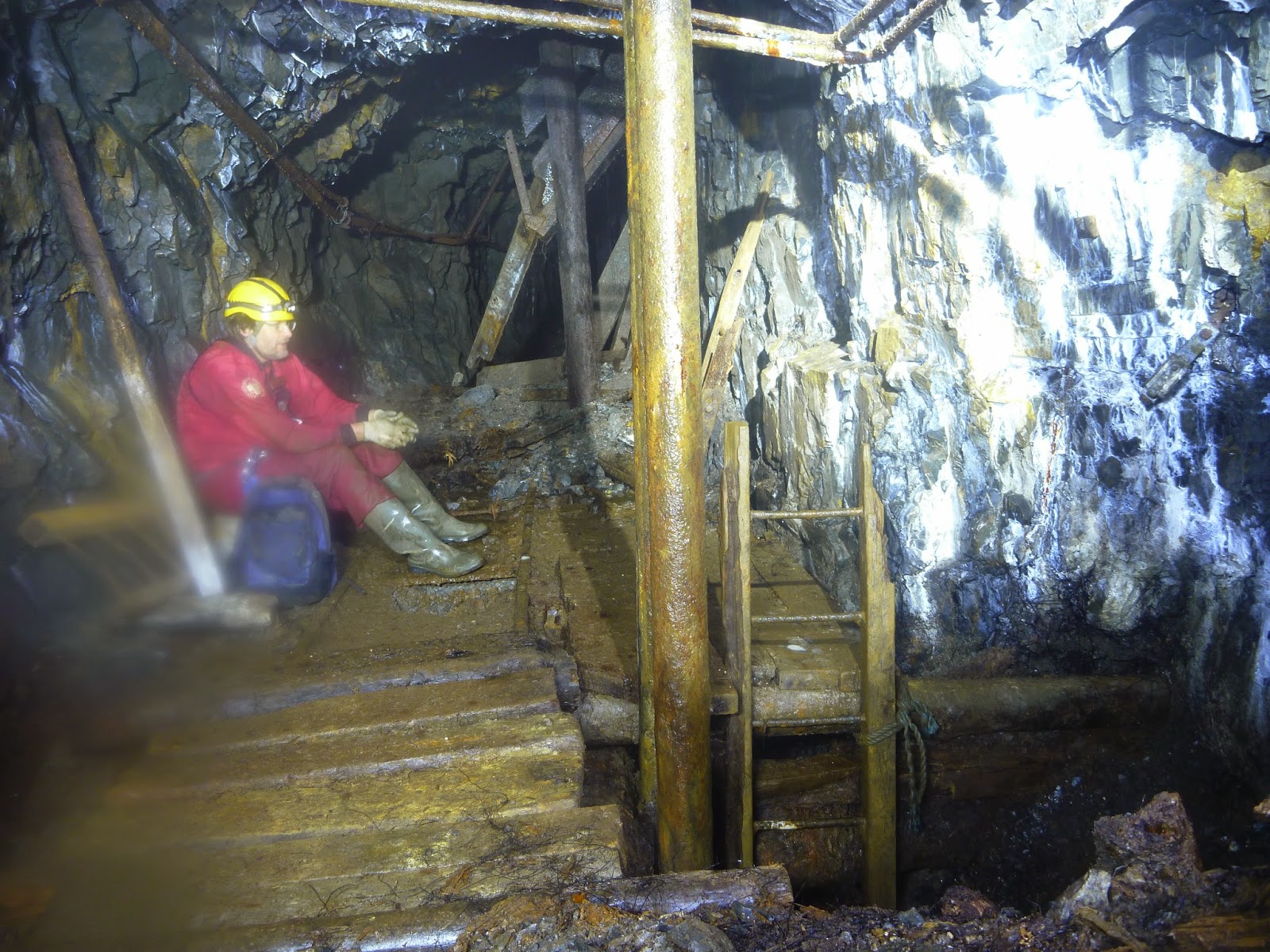 Dave at the top of the ladderway

Once out we decided to have a look at the hole I had been looking into from the inside. We also had a half-hearted attempt at finding the gunnis I had come through. We didn't find that, but one assumes It'd been well fenced off. And after all that searching it had got so late we relinquished any thoughts of a pint. Off home we went. I stuck the key in the lock at 0:30. Well late enough!
Posted by Margot at 08:47