Your own personal shopper

I am closer to 40 than to 30. I teach at university. Maybe there is something to say for dressing in something smarter than a fleece and T-shirts. I sometimes try; in Norway I practiced sometimes on the glamorous scale of dressing up, and about a year ago I managed to make some modest improvements on my wardrobe, but it’s all very slow and small-scale. Neil already commented on me either looking very scruffy or very glamorous, but never anything in between. And he was right!

A few months ago some revelation would pave the way for more efficient improvement. I went to Durham for scientific reasons, and was thereblown off my feet by Tasha, who was a traditional scruffy geographer too, but who had managed to smarten up effectively in no time at all. She looked spiffing! She revealed many shops have a “personal shopper service”; you can book one for free for a period of 30 minutes to 2 hours, depending on how thorough you want to be, and then they shop for you. You are received in a private room in the back of the store, and you explain to your shopper what you’re looking for. And then they forage around in the shop. And then my sister’s feedback, a weekend ago, made me prioritise a make-over even more. And then a swift water rescue training weekend was moved, opening up a whole weekend. I seized my chance. A local Debenham’s, the same chain as Tasha had chosen, indeed offered such a service.
I wanted some stuff I can wear at university, so I can look credible in front of the students. But I also wanted stuff in between the casual and the over-the-top. For a romantic evening, for instance. Or a conference dinner. And I wanted not only a nice shirt; I can get that on my own! I also want stuff to stay warm in when I look smart. And then I also need a bag, since smart ladies’ clothes tend to have no space for keys and wallets and such. 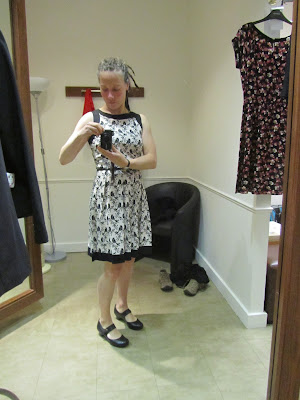 Me in the private dressing room. I didn't buy that dress, by the way!
And it worked! A personal shopper will bring out things you would never have thought of yourself. And people with such jobs have an eye for what looks good and what doesn’t. So a friendly lady called Claire prodded my wishes, poured me a coffee, and went into the shop.
I had booked two hours. We spent two and a half. And I spent quite some money. But I am quite excited! I intend to throw quite some scruffy old clothes away now. And I might have to do another spree: for accessories such as a scarf. And I will start wearing my new acquisitions very soon! Maybe I should have done something like this years ago. But better late than never! Bring on Smart Margot! 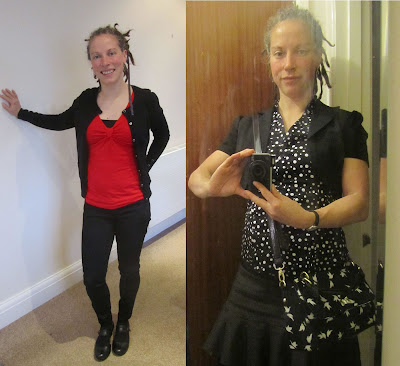 Left: how I went to work the next Monday. The least spectacular outfit! And I guess I'd have to lose the shoelace in my hair... Right is proof of the handbag. And another outfit. There are no pics yet of the remaining outfits. There will undoubtedly be a moment for more revelations!
Posted by Margot at 09:14

This is the first, and no doubt, last time, I have had any impact on a persons wardrobe! I am a little scared by the responsibility. Nice one Margot - you look lovely.

Think you should have bought that dress though ;-P

The first: maybe! The last: are you sure? And well, yes, it is a nice dress, but maybe you would agree with me that the dresses I bought instead were even better...

Oijoi! What sort of students you have when they do not take you seriously in old clothes!! I hope you still have some sort of black skirt for biking in the snow in case you come to Tromsø! Anyway, quite impressive operation - and what a practical way of getting done with shopping :)

I'm not sure if the students won't take me seriously in my scruffy old stuff! But with my new outfits I might less often be mistaken for one of them...
And of course I will still have clothing for biking in the snow! That's essential! :)