Newbies with enthusiasm get the jobs nobody wants. It’s one of the laws of physics. When I started caving in 2009, and liked it a lot, and went to committee meetings and such things, I became an easy target for some committee position. So fairly soon I became the Meets secretary; the person who makes sure a message goes out in time to all the club members with information on the next trip: where we meet, what one should expect (it is difficult? Is it wet?), and who the contact person for the trip is.

A contact person has several jobs: he or she knows who should be coming, so knows when we are complete and thus can go underground. This person should also know where the entrance is; not unimportant! Ideally, this person also brings helmets and lights for new members who don’t have their own yet. And at the end of the trip, this same person makes sure the same number of people as has gone underground also comes back to the surface again.

Sending all this information around sounds like an easy job, but it started out hard; what did I know about all these mines. I had to ask Dave many times where the venue was, where there was parking space, and what the venue was like.

I also often had to make sure there was someone willing to be the contact person; sometimes none is mentioned on the website, and then I had to find one. If there was one on the website, it was often a good idea to verify this person knew that, and was indeed willing and able to perform that task. And sometimes when something goes wrong (contact person falls ill, mine gets flooded; such things) an alternative has to be found. Quick.

Given that I am also rather good at producing lots of text (look around you on the blog!) I became an easy target for Newsletter Editor. And at the next AGM I was indeed elected. I inherited all the material from the previous editor; one of the biggest articles was actually written by myself. And soon I indeed produced a newsletter. 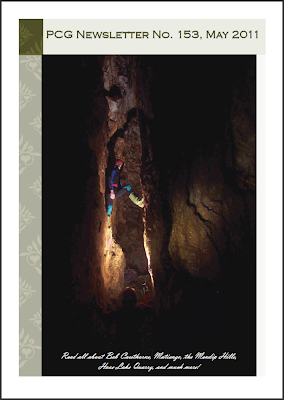 But by now I was a veritable veteran, and new eager newbies had appeared on the horizon. And when our secretary quit after having received some frictional emails from another, somewhat less-than-desirably appreciative committee member, things started shifting. Our president took on the role as interim secretary, and one of our fairly new, but most active, members: Bernard, made the mistake of confessing he would soon start working four days a week instead of five. More time for the caving club! So this was my chance to pass the meets secretary potato, and have some more time for making newsletters, for after that one issue I never made one again. Mind you; I only received input from just one person.

The next committee meeting Bernard wasn't there, so my evil scheme didn't work. But a month later we had our AGM, and then, after all, things indeed happened as foreseen. I am no longer the person to clog up everybody’s mailbox every week! But I may try to clog them up with newsletters from now on…
Posted by Margot at 09:25