It's not the setting up of a blog that's the difficulty; it's the maintaining of the blog! Few people may know that this blog was actually a birthday present. A splendid gentleman by the name of Blerik once gave me an "IOU" for my birthday; it must have been the last I celebrated as a Dutch resident. And he's very good with computers. So when I landed that job in Norway, and decided I needed a job to stay in touch with people, but had quite a lot on my mind already, with moving house internationally and stuff, I went back to that. I cashed the IOU: I asked him to set up what you are now reading. He agreed to do that, but he added the sentence with which I started this paragraph.
I think I managed. It's been almost five years now! And I seem to keep this speed up of approximately two postings per three days*. And in that way I have hereby reached the 1000th blog post! A nice milestone to ponder.
What has changed? Not much. Blerik's set-up has proved a classic. The biggest change has been the change in language. I started out the blog as a means to keep my Dutch friends and relatives informed, but when I left Norway I also wanted to keep the Norwegians updated as well. So I shifted to a more accessible language. And I have become more diligent in linking back to related blog posts, and providing labels.
Not everything goes as well as I had hoped; I rarely manage to inspire a discussion, and I rarely blog elaborate, well-researched thougths. The former is largely out of my hands; the latter is mainly because there are so many superficial things to blog about, and so little time for the deep stuff, that it rarely happens. I have several societal issues I want to blog about! But that takes time. There is but little.
I am always happy to sometimes, suddenly, be confronted with stuff that does work; people of whom I have no clue they read my blog suddenly turning out to be quite up to date with my whereabouts, for instance. And the continuing support by Blerik; it's rarely needed, but if my blog gets too strong-willed of its own, he generally comes rushing up out of nowhere to provide advice. Thanks Blerik!
And thanks those that have been reading! Either the whole period, or maybe only part. I like having an external memory in the form of this blog, but that would not be enough to keep going. I'll try to keep this level up, and to keep people interested and entertained! 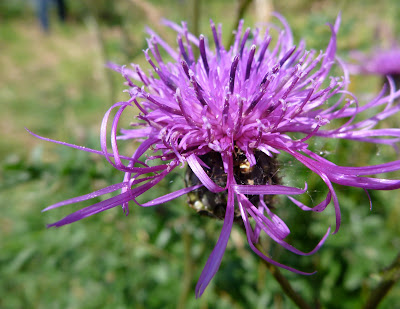 Altough 1000 is a rather random milestone (real nerds will appreciate the 1024th post even more), congratulations seem appropriate. Thank you for keeping us updated al this time. I certainly enjoy every new blogpost and hope you keep providing us with your stories! (especially the portraits of microscopic aeon-old monsters)

Perseverance, you have it.