If you go to Edinburg you have to see the castle. It's as simple as that. So when the search for the needle on the haystack would continue in that fair city I figured I should book an extra day.

I arrived on Saturday afternoon. I got to my hotel, checked in, and left immediately to see something of the city before the sun got down. People had recommended Holyrood Park to me; it may be slap bang in the middle of the capital, but it still is probably wilder than the wildest place in the whole of the Netherlands. And it was beautiful indeed! 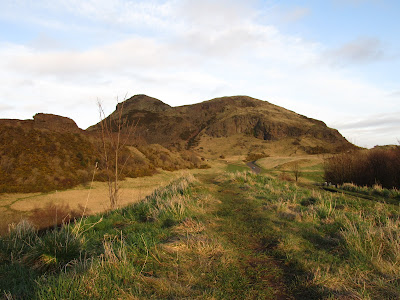 My first proper view on Holyrood Park with Arthur's Seat
Edinburg Castle is built on an old volcanic plug; that I knew. I did not previously know Edinburgh had an even bigger one; Arthur's seat, in the middle of Holyrood Park, which is a park as it's not good for building on, it being this outcrop of volcanic rocks. I climbed the top, being blown out of my clothes, and then walked along a cliff of basaltic rocks. It had gotten too dark for pictures... 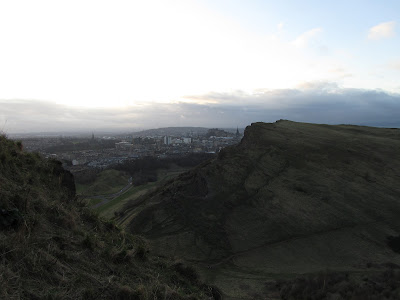 The basalt cliffs (crags) seen from the ascent to Arthur's seat, and the city behind them
The next day I made sure I got to the castle as soon as it opened. Having bought a ticket online I was one of the first in! I got to see it without crowds. There's a lot to see in the castle! It's pretty as it is, but it also holds numerous expositions. I spent quite some time there... 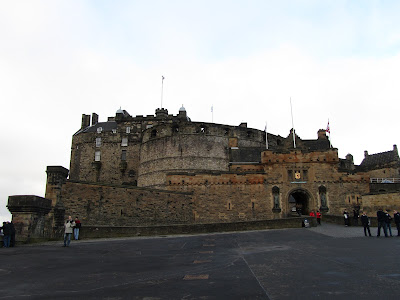 The castle just before it opened; notice the two people in red barring the entrance 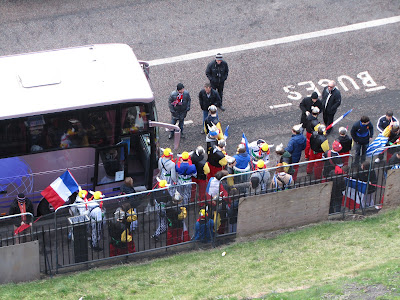 It probably had something to do with 6 nations rugby, which encompassed Scotland-France in the local stadium, but the city was teeming with French. And many of them wanted to leave no room for doubt on their nationality. Like this bunch, all dressed up as Asterix & Obelix... 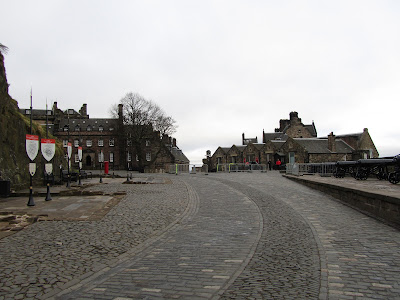 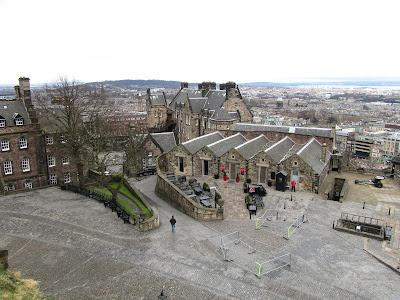 View on the old cart sheds, now a cafe, from above 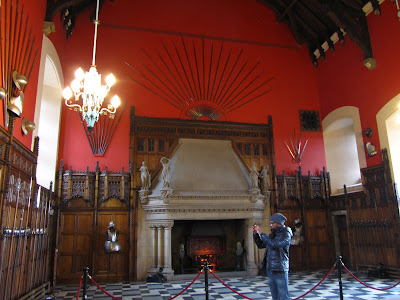 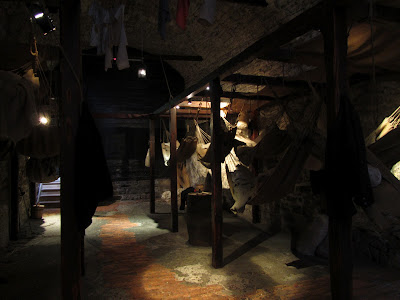 In contrast to the hall: the prison, furnished as it is thought it looked at the time 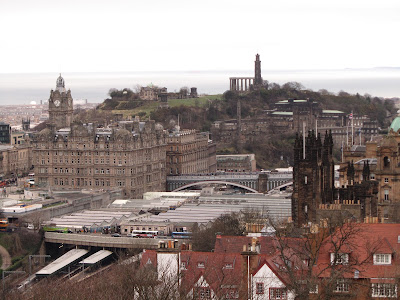 View from the castle, onto Calton Hill with the National Monument
After the castle I booked myself onto a tour in the catacombs of town, and had lunch. Some left-over time was spent shopping; I'm a lady now, and that's what they do!

The catacombs were connected to the volcanic rocks as well; ancient Edinburgh was built exclusively on a ridge, but when fear of invasion diminished while population soared, this was no longer feasible. Nor desirable. So the valleys on the sides, and the adjacent hills were developed too, and in the 18th century someone came up with the idea of bridges over the valleys. And no need to waste the space below; here they built these catacombs. Initially meant as storage spaces for the shops above, and for workshops for those who couldn't afford better; they were very wet, though, and not only water came down. Whatever the horses crossing the bridge were dropping percolated down too. Soon they were abandoned by the honourable. Later they were even abandoned by the criminal. And now, dug out and re-waterproofed, they are a tourist attraction. Some of it seems to have been rediscovered as a venue for nightlife! And once they had been very extensive; we only got to see a small part. Unfortunately... 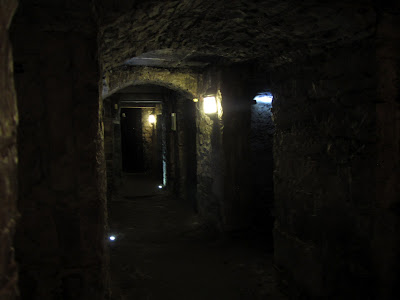 Then the day was over. Haggis and bed! Later I would see more of town, but that's a story for later...
Posted by Margot at 21:33