Holes in the ground!

A fieldwork with the fab four usually starts like this: we go to a salt marsh with a nice sleek hand auger, and stick it in the ground here and there. The cores we bring up will guide us to where we had best take our thicker cores for taking home and analysing. But now we're on the new project, in which  our sediments are no longer lying at the surface, and we need bigger equipment. And you don't just carry that around in your hand. So a recconnaisance mission isn't that simple.
But there's advantages; we now look for older sediments in the subsurface, so at the surface there could be anything. Not a salt marsh in all likelyhood, but probably fields, and houses, and copses and roads and railroads and quarries and whatnot. And the unpleasant thing is that you can't just core away without hindering anyone; not everybody will want a percussive corer in their back garden. But houses and roads and railroads need foundations, and one may want to know what the subsurface holds in order to construct these appropriately. Enter the British Geological Survey.
I knew of one core this institute had drilled, which was relevant for our project. So I searched their website for it. No results. Then I made an enquiry. And no time later I had a response.It turned out that they had archived their cores by location only; the name would lead you nowhere. So they pointed me in the right direction. And then a world opened before my eyes.
Countless many BGS core logs are freely available on their site. Suddenly I had access to the logs of hundreds of cores in our area of interest! That saves us coring. The BGS has already done it for us! With this wealth of information we can have a fairly good idea of where to core before we even get off our scholarly behinds.
The records themselves are quite interesting themselves; quite many are fairly straightforward and informative, as the two below. 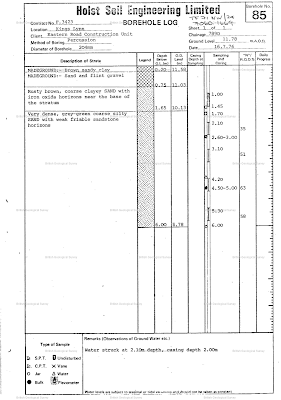 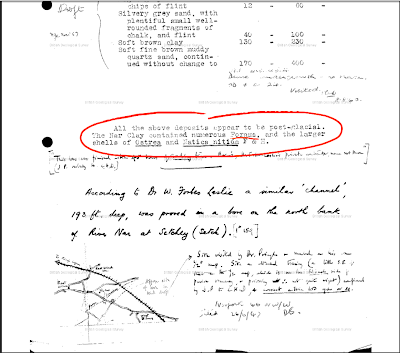 This is a rather specific one: forams in the Nar Valley Clay; that's what we want to hear!
But some are very charming in their antiquity, as the one below, from the 19th Century. At times I get a bit overwhelmed by the sheer plethora of information, but altogether this is one of the best websites I've found in a while! 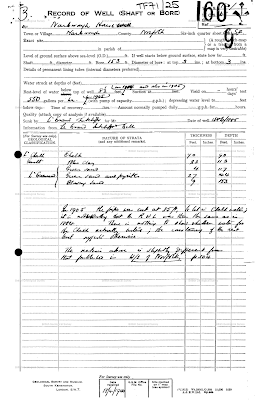