Is the government obliged to protect its inhabitants from seeing their houses plunge into the sea? If your house is about to do just that, should you A) protest about it, hoping this event will either be prevented or you will get compensation, or B) keep silent and sell your house on to someone gullible who hasn’t realised yet this event is nigh?

Interesting questions, addressed by one of the newer lecturers in the Marine School: Steve Fletcher. He gave a seminar called ‘Protest and justice in UK coastal change policy’. When he looks at the coast he has one foot on physical geography and one foot on policy, and thereby managed to fascinate the audience, of which most stand with both feet on either of these sides.

It seems that the Coastal Defence Act of 1949 allowed local authorities to decide for themselves whether they would defend their part of the coast or not. And they are also free to change their mind along the way. Which can lead to interesting surprises, for instance, for people who have been living behind some coastal defence structure for generations, but whose local government has decided this structure has become too expensive, and decides to leave it to the elements. Perfectly legal, apparently, but still bad news if it’s your house that will vanish along with an eroding cliff face.

The scenario above sounds like a cartoon, but it isn’t really; the example of Happisburgh in Norfolk was brought up. It has been protected by extensive coastal defences for donkey’s years, but the powers that be have decided these became too extensive and changed the policy from “hold the line” to “no active intervention”. At least twenty-three buildings have already plummeted into the sea… 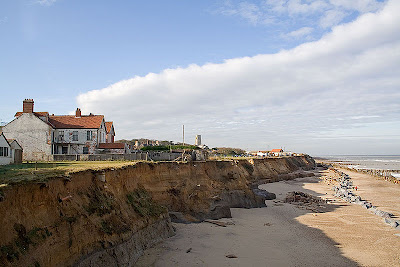 Happisburgh teetering on the edge. Picture by Andrew Dunn.
Source: Creative Commons
I also found a copyrighted picture of the damaged sea defence here
Fletcher raised several types of indignation that can arise in such cases. The temporal one: why is it us who have to suffer this after all these generations before us have been protected? The spatial one: why are we sacrificed while London, for instance, gets protected? The procedural one: why have we only been involved at the last minute? And the egalitarian one: why don’t I get protection while I pay my taxes like everybody else?

And of course, in times of rising sea level and economic hardship it’s unavoidable to sacrifice some coastal land. And hardly anybody is interested in coastal protection policy in the large-scale, long-term stage. Only when it has impact on the individual will they rise up to fight their case, but by the time that has happened it’s quite late. And maybe you don’t want to fight; you’ll only draw attention to the worthlessness of your house! 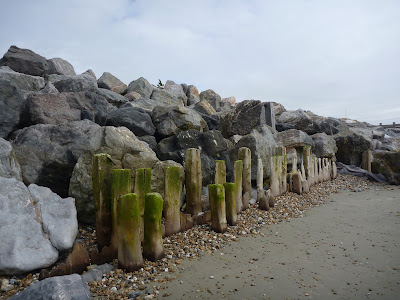 Gratuitous picture of some weathered sea defence I saw in Sussex in 2010
Some communities do fight; interestingly enough, it seems that such protest is concentrated around London, while all the way up to the Scottish border you will find English coasts at risk. An interesting discussion followed on why that is: is it just easier for these communities to travel to London to have their voices heard? Or are these protests staged by London import who know the way in politics, while the more distal communities only have less educated and vocal inhabitants? It’s mere speculation, but interesting nonetheless.

Given that so far there is neither an end to sea level rise nor economic hardship in sight, the issues raised during the seminar will probably only get more topical with time. I think Steve Fletcher won’t have to be bored anytime soon!
Posted by Margot at 09:11