If your sister offers to vacuum-clean your house you shouldn't decline. But you neither should give her reason to repeat that offer.

Since I moved to the UK my sister visited once (and I visited her zero times!); during Christmas 2010, with her husband. As the blog relates, this visit almost went wrong, as half of western Europe was snowed in, and I had trouble getting back to the UK form the USA, and she might very well run into problems coming from Helsinki to the UK. And in the end it only just worked out: we arrived in Plymouth together. This did mean, though, that my house wasn't at all prepared for her sense of hygiene, and for the dust allergy of Antero. So she hoovered my house. 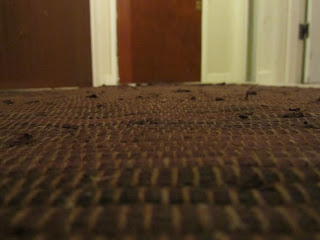 The mat in the hallway being uncharacteristically clean
She'll visit again soon; I think she can actually cope with my house as it normally is, but I want to make a gesture. So I cleaned more than I usually do! I removed lots of caving mud from the kitchen, I tried to do some improvised cleaning of the windows (I don't have the tools!), I hoovered... my house looked most uncharacteristic.

The kitchen windows were the biggest challenge: I have these old-fashioned English slidey windows, but in the kitchen the upper pane is fixed. So you can basically only clean both panes from the outside by being outside yourself. You can't lower the upper pane, and then lean over! But if you stand outside you might fall down. And that's not good. There's not much to hold on to. And there's nothing you can tie yourself to either! At least, not at first sight. But at second... 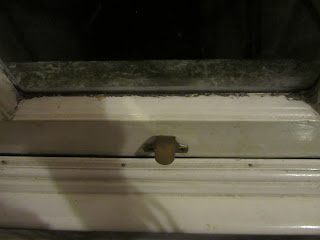 Not quite sure this is the most convincing picture of a clean window ever, but do notice the free view onto the very algal outer window sill!
My bicycles live in the kitchen so they don't get stolen; I park them in front of the kitchen window. And the bikes are wider than the actual window! So I figured that if I would attach myself to the bike I could get outside and do my cleaning: if I would fall down the bike would get wedged behind the window pane and stop my fall. So that's what I did! My belay belt and a sling did a spiffing job. And I thought I was most inventive. Who would ever have thought biking and caving could lead to clean windows?
Posted by Margot at 08:55