If I vote for it, it probably doesn't make it first past the post. So as a UK resident but non-citizen I get the right to vote in the municipal elections, but as they don’t do “one person, one vote” (how politically correct do I describe it!) my vote goes, practically, straight down the drain. There goes my political power.

But then my attention got drawn to the phenomenon of the e-petition. If the public wants politics to discuss something they don’t consider on their own initiative, it can start an e-petition. If 100.000 people or more sign it, it must be discussed in the House of Commons. I remember when they started this initiative; the first one that got posted allegedly was "Gordon Brown should resign"...

I had no idea you didn’t have to be a citizen to sign them! Being a resident is enough. So when I found that out, a red mist appeared before my eyes, and I frantically started to exercise raw, shameless and blunt political power. Alright Brits, you’ve let me in, and now you have to take my thoroughly continental thoughts and convictions into consideration! Ha! 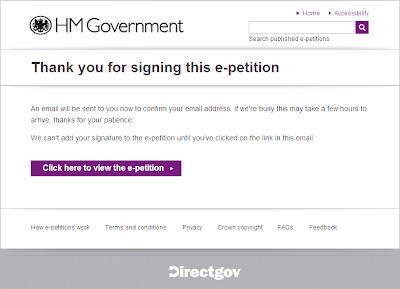 Maybe I won’t single-handedly turn this country into some Europhile, liberal pseudo-Netherlands; I am only one of what hopefully will be 100.000 at least… but still I found it satisfying! I signed two: one that asks for an official pardon for Alan Turing, one of the key brains behind the Enigma machine which did immeasurable service to the allied forces in WWII, and the spiritual father of Artificial Intelligence. He was convicted of “gross indecency” (read: gay sex) in 1952 and chemically castrated; two years later he committed suicide. He ate an apple poisoned with cyanide; some people wonder if the Apple logo is a tribute to Turing, but as far as I know this is a coincidence. I heard through the grapevine that, when asked in an interview, Steve Jobs confessed he only wished they had thought of that. And thanks to Blerik here's a link to the actual story of the Apple logo...
Anyway. There is an e-petition asking for a pardon for Alan Turing, on the basis of all he’s done for Britain, and for so much of the rest of the world. And that petition is still open until late November, but already the Justice Minister has rejected the request, on silly grounds. Is this another case of British homophobia? Or is he afraid there will be endlessly many more e-petitions asking for a pardon for people who have been convicted for breaking a law that in 21st century eyes is an abomination? Either way, I think he is both wrong and speaking prematurely. I do hope this petition, signable by citizens and residents of the UK, will make it past 100.000 soon, and that the Justice Minister will have to eat his words!
And while I was at ait anyway, I signed the petition asking for evolution to be taught at all schools, and creationism at none. A splendid cause, if you ask me! If you want to tell about creationism you can do it in a church. Schools are for education…
Posted by Margot at 14:00

Offtopic: The bite out of the apple logo was added so 'people get that it was an apple not a cherry'.

Cool! I took the liberty of putting that link in the text...