Ophelia, you must remember...


What should Ophelia remember? When I couldn't get 'Ophelia' by Tori Amos out of my head I started wondering such things. And I decided to read Hamlet. 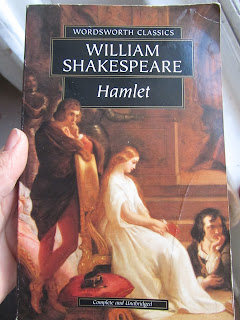 Comparing song lyrics to their literary inspiration is asking for trouble; there are many steps in which unchecked interpretation takes place. But it’s an interesting exercise. So what was it again the song says about Ophelia? The relevant passages are the following:

"The Eve of St. Agnes",
A poem he can't reach you in
Ophelia you know how to lose
But when will you learn to choose
Those men who choose to stay
Those mothers who won't look the other way
Ophelia you must remember

Some of it I still don’t get. Of course; it’s a Tori Amos song. But in the light of Ophelia being rejected by Hamlet after he has been summoned by his murdered father to revenge him might explain the 3rd and 4th line. And would her secret be that she committed suicide? It’s not perceived as very secretive in the play.

And when I came to what here is the second verse I had to, of course, also read "The Eve of St. Agnes", by Keats. That poem relates to a myth that claims that unmarried maidens who stick to some rules, such as going to bed without dinner, and not looking back, will get a vision of their future love in their dreams on that special night. One besotted young man sees a possibility there: he sneaks into his love’s bedroom’s walk-in cupboard, and he wakes her up to provide her with a waking dream of what he hopes will be her future love. And it works! Alas; no such luck for Ophelia, evidently…

Ophelia lost; she lost her lover, her father and her senses. And her life. The next line reeks of cheesy rhyming, but let’s look past that. What choice did Ophelia have? Could we do better in her shoes?
There wasn’t much she could have done to prevent being ditched by Hamlet. There wasn’t much she could have done to prevent Hamlet from murdering her father. But she could have chosen to break the chain; take these misfortunes on the chin, get on with life, and not add one more to the rapidly growing pile of corpses. It’s fat chance with Shakespeare that would indeed have meant entirely breaking the chain of violence; too many men had too much at stake. But one can try. And Hamlet couldn’t reach her at the Eve of St Agnes, but maybe someone else would have. A more forgiving playwright might have made her dream of Fortinbras, the Prince of Norway, and in a way Hamlet’s successor…
Posted by Margot at 08:34