The weak and the sophisticated

Over Christmas I was quite ill; that’s enough infirmity for the next 6 months, one would think. But no! I probably asked for some more trouble by simultaneously having boiler issues at home, and a radiator in the office that just isn’t up for battling cold spells. Basically, every place where I would sit still would be cold. And then on Sunday I biked to deep dark Plympton to deliver entry forms for the next week’s race by hand; with Hugh having been in Japan we were too late to send them by mail. And Plympton is hilly. I should be entirely bike-proof, but still; maybe the getting sweaty uphill, and then the blasting through the cold air downhill, didn’t do me any good.

So I got another sore throat. Annoying! And after a sore throat one gets sniffly. I abode by that tradition. And though I wasn't too ill to go to work, I didn’t feel up for running that 10 mile race, the registration for which might have done me in. But then the day can be used otherwise! Hugh, who was under the weather as well, suggested a walk. We decided to befittingly walk the Devonport Heritage Trail, on which I have written before; it would not be too far, it would be informative, and it would cover quite some of the same ground as the race.

It was a beautiful day, and we saw many charming corners of town we otherwise may never have seen. A success! And of course we ended the stroll with a pub lunch. As one does. It fit quite well within my new image of the sophisticated lady. I do hope, however, I’ll soon be back on top, doing the usual sweaty and muddy things! I should not have to buy elegance with good health… 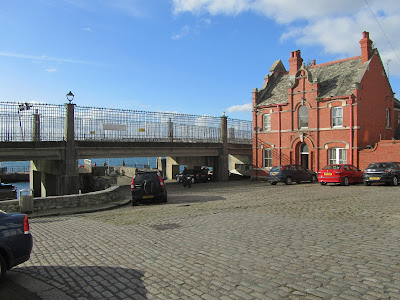 This is a bit odd - a concrete bridge thrown slap bang over a historic, cobbled quay. Strange! 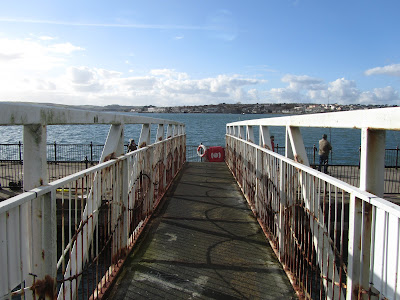 If you pass underneath that bridge you come to an old, rusty jetty 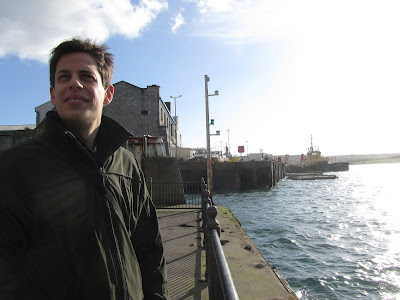 Squinting Hugh with a tug boat in the background 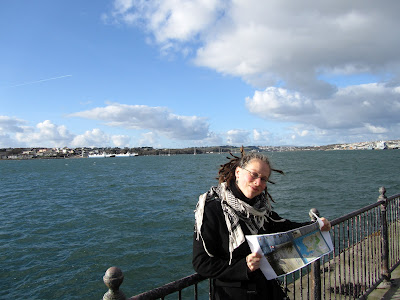 Me reading the information leaflet, with the Torpoint Ferries in the background
Posted by Margot at 08:19