It's almost a year ago I was giving my marching orders! I was suddenly told I had to swap offices with Dei. It wasn't particularly clear to me why, other than that my office is too big, but in the year in between things became a bit more clear. It seems that there are people who are quite senior but stuck in small offices, and have their eyes on my huge office. And if I don't move out soon I will be booted out to make room for them.

Is that worse than moving into Dei's office? Well, for one thing, Dei had already moved half his stuff in quite soon after the announcement, and that would mean he will have to move it out again. And moving is easiest when your offices are so close together! His office is across the corridor. I'm not sure who wants my office but it can't be someone as close by. But after that first bout of moving nothing happened. And the powers that be were getting impatient. I kicked Dei in the bum! We had to get moving.

The day we did the last fieldwork recce we restarted. Dei started moving stuff in, and if he was otherwise engaged for a while I would suss out if any cupboards were empty already, and start moving stuff in. We got quite far! But the day after, Dei only moved a few more things in. And then it was weekend.

On Monday we continued. But we still couldn't finish it! Dei has been in his office for a while, and has loads of stuff. And a move is a good time to sift through that. But then it takes time! 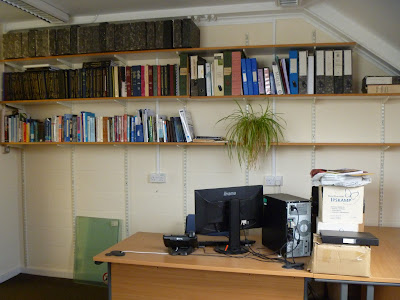 This was the situation for months: Dei's stuff on my shelves, Juan's old computer still on the desk, some of my stuff in boxes on the desk too, waiting for cupboard space 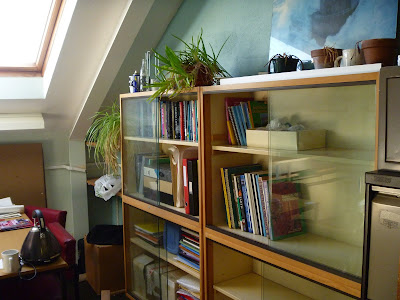 When Dei emptied out his stuff I started colonising his cupboards 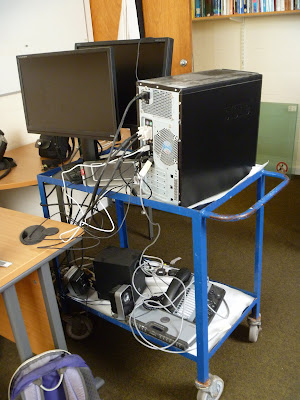 The final stage: loading all electronics onto a trolley 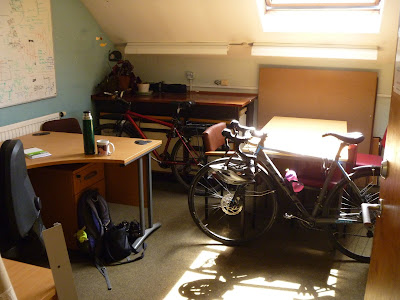 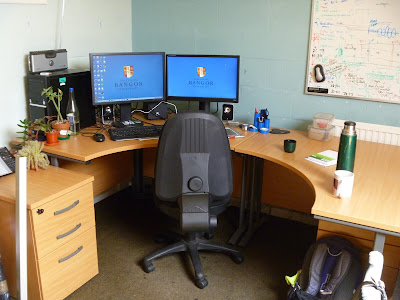 I took the Tuesday off. On Wednesday I was back, and when I walked into what I still considered my office I bumped into Dei who was comfortably working away on what had been my desk until I moved to Paul's old desk. He won't want to stay there! But as long as it is summer he'll be fine.

Dei having moved was my cue to move too, but not quite yet. The cleaners were working on the mess that had been left! When they were done the place was unrecogniseable. The next question was furniture.  Dei had left his old desk in his office. The surface was fine, but the drawers were broken. We decided it probably had to go. He sent an email off to the head technician to see what we should do with it. The guy promptly appeared, and he and Dei whisked the thing off. That meant Dei and I could move the first half of my two-piece desk into the other office; I could then move my computer with all its accoutrements to that half desk, and then move the other half. And I was soon set up!

The only thing Dei still has to do is empty out the filing cabinets. And then we've really swapped! Good for me. Not yet for Dei; he basically just dumped all his stuff on a few tables and desks, and moved to what had initially been my desk. The space where my next desk had been was big, empty, and needed hoovering. Once that's sorted he should decide how many desks he wants (it had been a four person office) and where he wants them; put them there, and then tidy all the stuff. A fair amount of work! But then he'll ave a big, glamorous office, with a view! And probably quite some extra warm clothes lying around for when winter comes, he'll feel the disadvantage of that office...
Posted by Margot at 08:20