Making a start in the Knotweed war

I had been wondering about my knotweed. It's not doing any harm, but it made my mortgage lender wonder seriously if they should provide the mortgage. It's clearly a serious matter! One day I might want to sell this house. Not anytime soon, but still. By the time I do there should be no knotweed anymore! But what to do about it?

Should I try to make Natural Resources Wales deal with it? They're not keen. It's not their land; it's nobody's land. And I suppose they have got their budget cut like all other government-funded bodies.

Should I pay the bloke Rose had on board to do it? Not sure; he clearly didn't get rid of it.

Should I pay some official knotweed removal company to do it? These can be very, very expensive.

And what would the NRW, or this bloke called Eric, or an official company really do? Probably spray or inject with Round-up. It seems to be the thing to do. I am against spraying; the poison would get into the river. So injecting then. But couldn't I do that myself?

When Marieke was here she suggested we start trying to do something about it, so we spent sometime googling. And in the end we decided I just buy an injection set and tackle it myself. Rose had left me a big container of Round-up! And the injector wouldn't arrive until she would be gone but at least the plan was there.

And then it arrived! But well, life got in the way, so I hadn't done anything yet when Wim and Joke arrived (as I keep saying: more about that in a later post!). Typical! The same as the whole sawing down trees business. So when Wim and Joke decided to spend  a day helping me with the house, and Wim attacked the trees, Joke went off on a knotweed killing spree. She liked injecting stuff, she said. And off she went.

She did manage to bend several needles. I hope I manage to avoid that when I give it a go! It's not as if you can buy knotweed needles in every cornershop...

The idea of injecting the plants, btw, is that the poison gets into the roots, as it is these you want to get rid of. So it's not like the leaves immediately start to droop. You pretty much only know how well you've done after seeing how much comes up the next year! So I'll have to wait. I might in the meantime attack the clump that stands upriver; it's quite far from my house, but when I have the kit anyway, I may as well use it. That way I can finally be of use to my ever helpful neighbour! 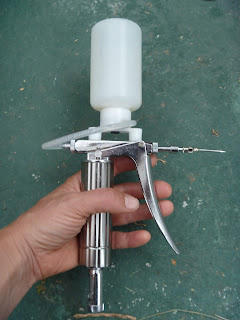 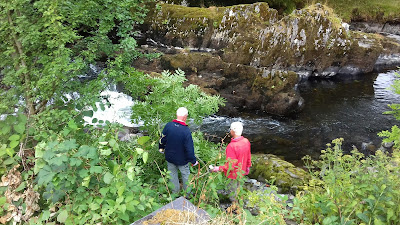 Joke with the killing machine, and Wim with the saw