I think I spent some twenty years hiking with a changing group of Dutch friends. A lot longer than this blog has been running! And hikers hike, with of without me. And so it happened that Jitske (who had been living in the same building as me in my early days in Amsterdam) would guide a trip in South Wales. And she figured that when she would be in the country anyway, she might as well take the train north and hike some more. And visit me!

The plan became that she would walk as much of the Snowdonia Way as she could in the time she had. She would take the train to Machynlleth, where the trail starts, and see how it would go. All routes come in two versions; the low route and the mountain route. Depending on the weather she would choose one or the other.

Her first plan was to meet me in Penrhyndeudraeth. But then she texted; it would be Trawsfynydd. She had taken the mountain route (over Cadair Idris). And there's a bus going there. I thought I'd take the bus on Tuesday night (I needed a day or two of work so as not to get too far behind after my trip to the Netherlands), meet her there, and hike with her until she had to take the train again on Saturday. The weather forecast for Wednesday was awful but well, so be it.

On Tuesday evening I got out of the bus in a sleepy Trawsfynydd. Jitske appeared out of a bus shelter (the local pubs had all closed) and took me to where she had pitched up. That was right at the lake! Very scenic. We pitched my tent, had a cup of tea, and went to bed. Afterwards I figured I hadn't seen her in 2.5 years but after enough hiking you can pick up quite easily again.

The next day we woke up to rain and wind. It was supposed to mainly be bad in the afternoon! Oh well. We crossed the footbridge over the lake and started walking up the other side. It was pretty! Be it a bit damp. And it wasn't rainy all the time; we had a nice coffee break at the lee side of a wall during a dry spell. 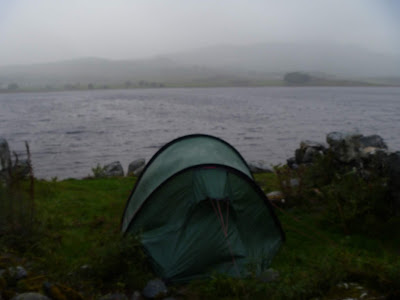 My damp tent next to Llyn Trawsfynydd 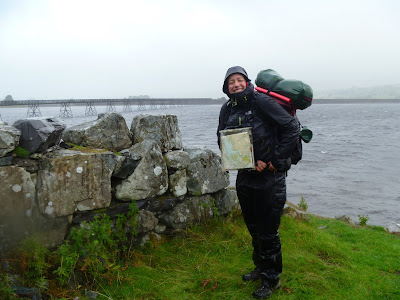 Jitske is ready for anything 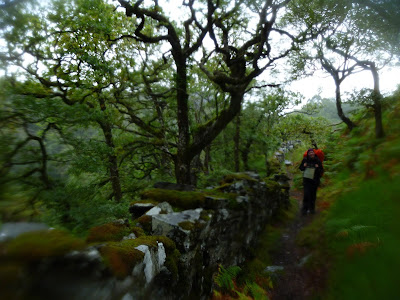 Dreamy woods near the dam

At Llyn Tecwyn Uchaf we met a boy walking alone. He said he was on holiday here with his family, but the others were all still in bed, and he had decided to set off alone to enjoy the surroundings. A good idea! We had a nice chat with him. But when we hit the road (we had to cross the Dwyryd and that had to be done on asphalt) we had to go our separate ways.

By then we were hungry and hoped for a pub lunch in Penrhyndeudraeth. Unfortunately, the pub was closed. There were takeaways but they didn't provide seating. We had been on our feet quite a lot! A passing man offered to drive us to the Eric Jones cafe but that would be too far out of the way. We decided to just walk on and eat out normal lunch out of town. 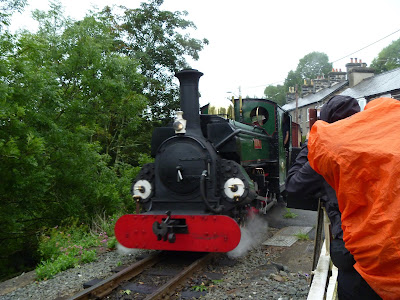 In Penrhyndeudraeth, the steam train made an appearance

We found a railway bridge (of the steam line) under which we had our lunch. And from there we walked on. It rained! And it was windy.We walked to Rhyd, and then on to the road to Croesor. The plan was to walk to the terrain between Croesor and Nantmor and camp there. But by the time we hit the road to Croesor we were tired and the weather was atrocious. We wanted to have another break. Nothing said 'shelter' to us until we saw the chapel of Croesor. (Or course the Croesor cafe was closed). It had a porch where it was dry. We sat down for a bit! And looked at the rain coming past horizontally, and the trees being swept by the wind, and wondered why again we were here. Oh well! We went on. 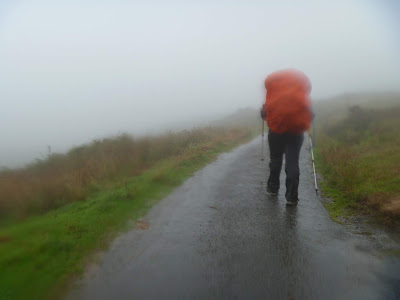 
We walked out of Croesor and immediately noticed the quiet. There is a copse there! The wind couldn't get to us there and the rain was a lot less cumbersome when it came in vertically. We decided to camp right there. We had walked some 21 km by then, so we were hardly being lazy! We pitched the tents. I went for a wash (there was water everywhere) and then we had dinner. After that Jitske announced she was retiring to her tent to read a book. I lay on my mattress for a second and decided that actually, lying down was lovely. I brushed my teeth and went to bed. It was 9pm! 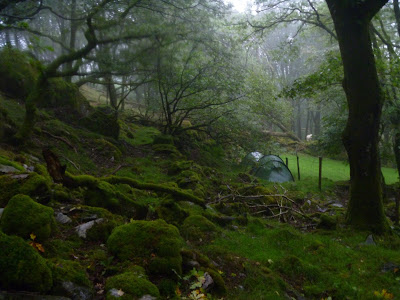 The next morning I saw we had had a team stand-by; some people were overdue from nearby Croesor mine. Typical! But it soon became clear these people were out, and communication had just not worked well. Better news was that the weather was looking good. We liked that! We decided to hike over Cnicht.

We set off. It was still a bit cold and windy but at least dry. And we climbed Cnicht, and indeed had a view from the top! That's always nice. Below the top we had a coffee break. Then we walked on, through the swampy bit past Llyn yr Adar and Llyn Llagi. We abandoned the official route here; the Snowdonia Way makes a loop to Dolwyddelan, and we didn't quite see the point. We would never get to Bethesda that way! And in the meantime the weather got better. It was even sunny from time to time. And Jitske got to see the top of Snowdon for the first time. 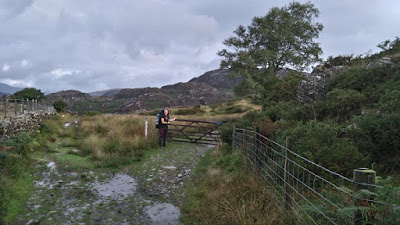 Cnicht: this way! (Pic by Jitske) 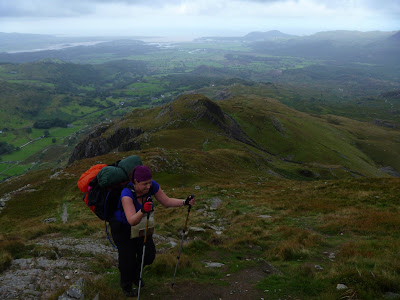 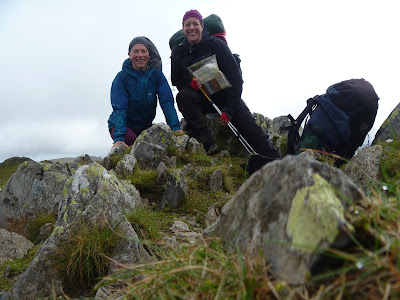 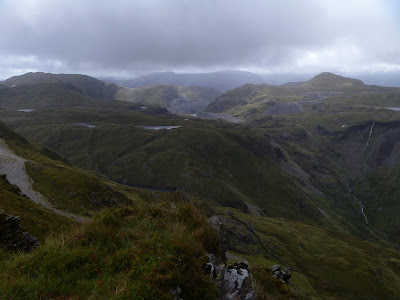 This view just never gets boring

When we hit the road in the Nantmor valley we sat on for lunch. We were facing asphalt, but we had a fence there! With a gate! Or in other words: a clothes line! We needed that. We hung out tents, clothes, rain covers, and my sleeping bag. It was great! Everything got dry. Our quality of life quite improved. 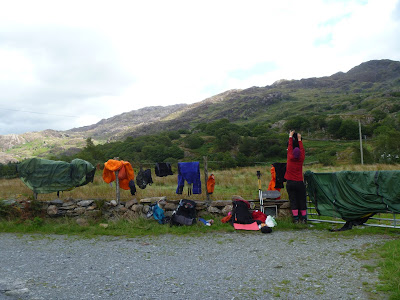 Dry all the kit!

After lunch we walked on; we were heading for Llyn Gwynant. We might camp at the campsite there. We also might go on to Pen-y-Gwryd as after quite some hiking, Jitske craved some fresh food. We reached the campsite, didn't quite like the look of it, and walked on. All went well so we kept walking. And the old road to the hotel was quite comfortable. Soon we saw the building! We decided to see if we could camp in the field behind. And we found a flattish spot next to a weir in a stream (or in other words: a bathtub), so we went for it. We pitched the tent, each had a bath (it was needed) and headed for the hotel. It served food, but only the three- or five-course meal for guests. But they could fit us in! But food was only being served at 7.30 so we had to sit down for a pint. We had only walked some 16 km, and in good weather, but including Cnicht and the swampy bit behind it had drained us a bit anyway. 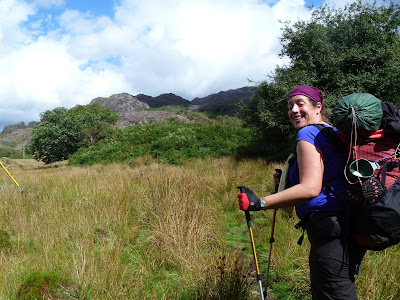 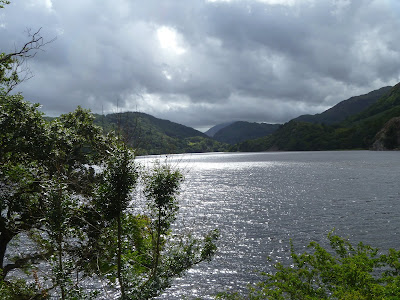 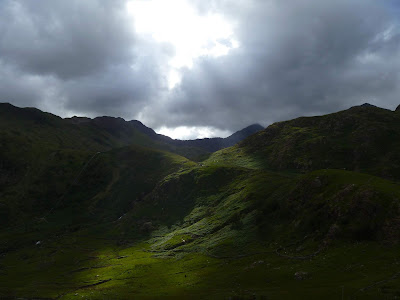 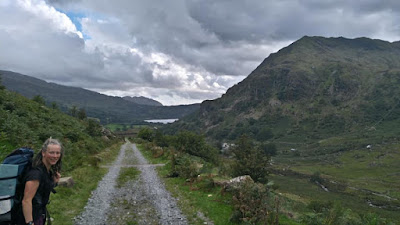 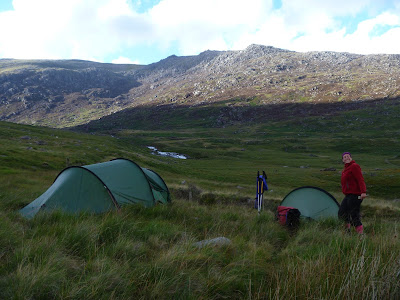 It was quiet, and the bar lady was quite chatty. She had little else to do! Her colleague joined in, and then some actual guests. It was quite nice! And then the gong went for dinner. It was all very posh! Bright white table linen, table silver; the lot. Fun!

We had soup with bread, and then risotto with halloumi (the cook had been willing to improvise something vegetarian for us) with vegetables. And then we managed to cram a rhubarb crumble in. I felt nine months pregnant! We had another cup of tea in the space behind the bar, with the other guests, and then it was bedtime. We hobbled back to the tents and slept like logs! 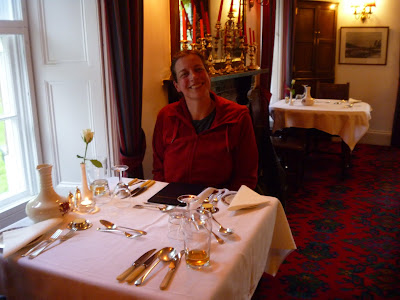 The bar lady had said the next day would be dry. We figured we would walk up the Miner's track (the bit north of Pen-y-Gwryd, not the more famous part from Pen-y-Pass) and then walk in northwesterly direction until we would decide it would be a good time to descend into the Ogwen Valley or Nant Ffrancon. But the next morning I had some signal and the weather forecast actually mentioned rain from 2 PM. Oh dear!

We started off, walking up the ridge. When we got there we had a lovely view on Tryfan. We had a coffee break, and went on, but by then it was cold and windy, and was starting to get wet and misty. Glyder Fach was so wet we kitted up in full waterproofs again. And being blown about and balancing on the slippery rock we proceeded to Glyder Fawr. By then we figured that seeing nothing, being cold and wet, and being blown off the ridge wasn't particularly fun. We would head for Devil's Kitchen and come down! Somewhere in a sheltered spot above Llyn y Cwn we had lunch. Then we stumbled down. A lot of people came up, asking us how the ridge was. We told them! Most turned back. We also bumped into several of the Pen-y-Gwryd guests. That was nice! 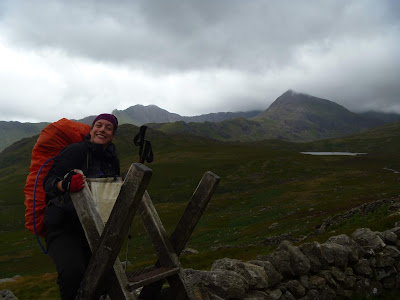 Horseshoe seen from the other side 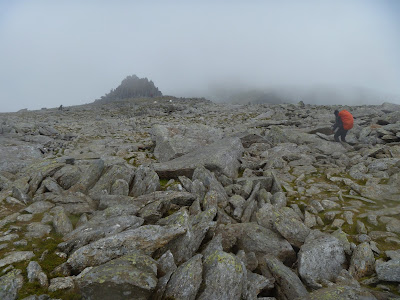 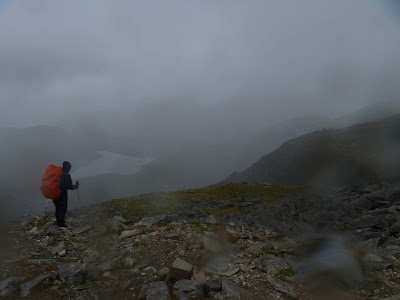 Looking down on Llyn Cwmffynnon 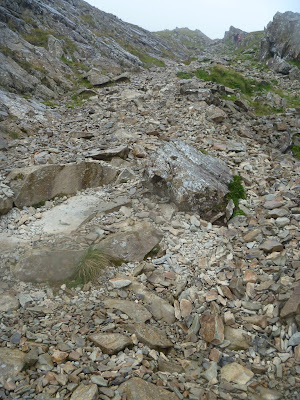 Coming down Devil's kitchen in wind and rain and with a heavy backpack is a bit of a chore so by the time we came down to Ogwen Cottage we had had enough. We had only done 10k but we didn't feel like making that 18km by adding 8km of asphalt! We stuck up our thumbs. Within minutes we were picked up by a forester. Very nice! He brought us pretty much home. A good hike had come to an end! 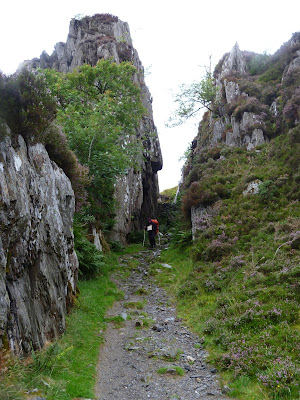 As good as back in civilisation!