Keep the cold out of the office

The previous Thursday it had been such awful weather that even though the heating was at full blast, my office was only 8 degrees. That's too cold! I borrowed an electric heater which was an improvement, but it was hardly comfortable. That Friday the entire university was closed. A local workaholic pointed out the heating had been on, though. As the storm was still strong I can't imagine it did an awful lot of good in my office!

On Monday I returned, and looked forward to some quiet work after all these disruptions by strikes and storms and whatnot. But when I came in I felt the cold. It was only 5 degrees in my office! The heating wasn't on! That make me decidedly cranky. I immediately phoned Estates (who are responsible for such things) and luckily managed to sound friendly and polite. Whoever you get on the phone is not likely to be someone who has the power to make sure such things don't happen! They said someone was on it. At least I had my radiator. But I did decide I was going to block off one of the single pane windows. Yes I will one day move office (it's still not happened yet!) and yes then it's up to Dei what happens with it and yes the weather will probably soon get better anyway but I was fed up. That blatant heat leakage had to go! Luckily I had an old notice board and some cardboard. Both are good insulators! 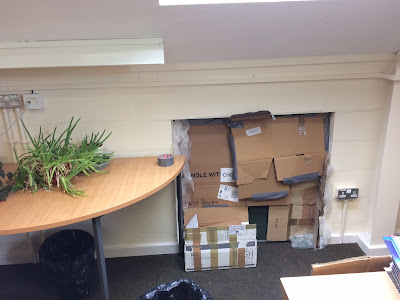 That day the temperature never reached the legal minimum. But the day after it did! It took until the afternoon, and it took the help of the electric heater, but it got there. I suppose spring is in the air though. I will be glad when this office will stay above the legally advised temperature all day, without too much prompting, soon! And I still expect that in summer Dei and I will actually make the swap. His office has the same number of radiators (namely 1), but is a lot smaller, and only has one single pane window, so it can still be quite cold (the day it was 8 degrees in my office it was 14 in his) but not quite as bad!
Posted by Margot at 07:46