I thought the first thing that should happen in the new house would be taking out the old fireplaces. Doing that would cause a lot of mess, and I figured it would be best to get that out of the way before all painting and such would happen! But it was hard to find a suitable stove person. The first people I contacted wouldn't even pop by to prepare a quote until April 9th; the second said they would get in touch and never did; the third couldn't come by very soon either. When the painter/decorator popped by he heard me say something along those lines, and recommended what I think was his son in law. Well, bring it on!

The two people I had contacted before gave quotes that I figured took the piss. This chap, Steven, gave a reasonable one. He got the job! And he set to work, with some contractors. While I was at work they pulled out both fireplaces to see what was underneath (after me having pulled the wood off one of them). I hoped raw slate!

In the hallway, it turned out that there was indeed a cavity in the slate. Two brick columns had been built up on the side for structural support, but for the rest you looked straight at the slate. Just as I had hoped! This was working out. The other one, in the living room, worked out differently. A brick fireplace had been put in in the seventies! And in such a way it was now part of the weight-bearing construction. Steven didn't want to pull the brick out. I could see his point. So we agreed on that one staying brick. A bit strange in a slate house but what can one do! 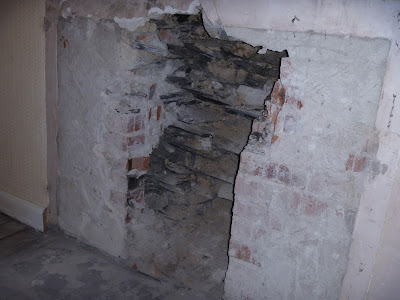 The fireplace in the hallway after the first round of demolition 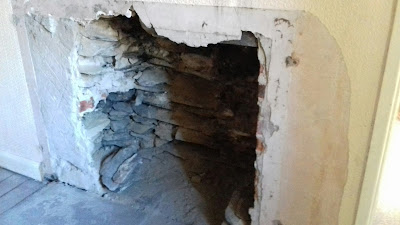 The fireplace in the hallway after the second round of demolition 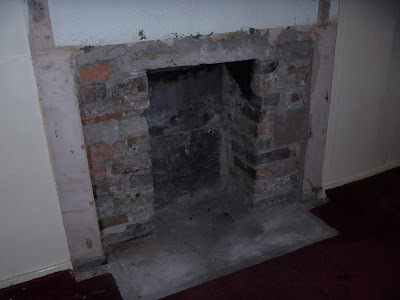 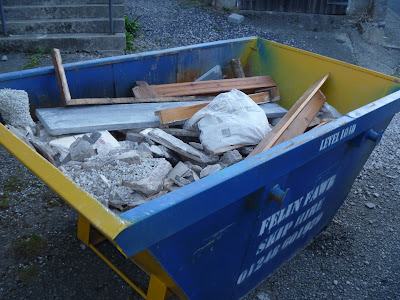 The skip in front of the house after the first round of demolition; blimey doesn't a lot of stuff come out.

The plan now is: Steven et al remove the brick bits from the hallway fireplace, and build up slate support instead. I go looking for a suitable piece of slate for a lintel. They will put that in. In the living room they will only remove some ugly breeze blocks from the brick structure and clean it up. That one should soon be ready for having a stove put in! It's starting to look good! I look forward to having that work done. And then I can still make a lot more mess tearing the ceiling out, but well, I'll tidy up afterwards...
Posted by Margot at 07:06