One of the nicer venues to climb around here is Holyhead Mountain. It is versatile, made of a nice lithology (quartzite) and it is beautiful. So I was glad we would go there again! The previous time we had been at a crag where there wasn't a wide enough range of routes, and some people hadn't climbed a single route to the top. That's not right! But Holyhead Mountain has something for everyone.

I drove up with Eifion. When we got there we met the four others. Enough people for a nice session! And in the sun we walked up. I was in shorts, which was great, until we came close to the crag (I think it is called Ramp E)  and had to wade through vegetation. Oh well!

First, four of us went up to install top ropes. This is a trad venue, and we don't have many trad climbers! But enough to set up the top ropes. And just being at the top was great, view-wise. The weather was lovely and there were no midges. Great!

After a while we were ready to climb. And so we did! We had three routes up. And I did them all. And they were fun! I think we only did one of the routes as it was intended but hey ho. We had a good time! I thought two routes were a bit unchallenging and one at a good level, but the latter depended quite on hand jams and these make me a bit nervous. I always imagine my feet slipping and me then shock-loading the hand jam! Which, as the name suggests, is jammed so you may not be able to immediately release. Scary! Although I don't think such things happen very often. Oh well. We all have our incesurities.

Later, while we derigged, the sun set and the sky became beautifully orange and pink and Snowdonia was shrouded in a blue haze. And the moon was out. Nice! We got back to the cars a bit late but we had all had a nice time! 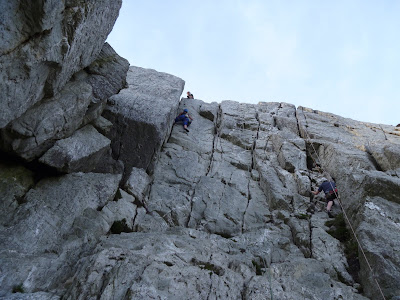 Catrin and Tony in action 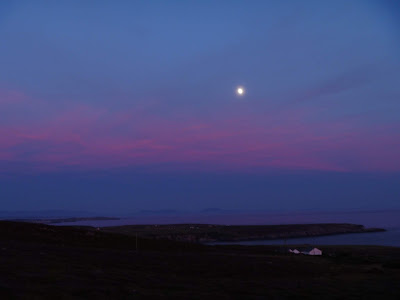 The lovely colour palet of the night