When I had removed the ash tree that isn't an ash tree (the neighbour says it's a sycamore, but it doesn't have flaky bark; after some pondering I think I just mistranslated 'esdoorn'. It's a maple!) I had seen there were more trees standing around there. One was actually a sneaky extra trunk of the maple that had grown horizontally along the ground for a bit, and thereby escaped my attention. But not for long! And one is a hawthorn (according to the neighbour), and there was an oak, and something unidentified tree that probably actually IS an ash. I figured I'd leave the hawthorn for now, but the rest had to go to improve my view.

On a Saturday I went down and took down the maple trunk with my trusted saw. It is what I have seen referred to as a plane saw, and I fear it's not really a good one. So the sawing is a bit of a pain! But the trunk wasn't thick. And the oak also succumbed to my inadequate saw. Then I had a look at the ash. It was so thick I didn't want to do it with the saw I had! So I left that for now.

When I mentioned it to the nighbour, he lent me his bow saw. But I didn't get round to using it until Wim and Joke appeared (again; more on that in a separate blog post). Wim felt like taking the ash down. And he did! In not much time. And cut it into firewood.

I now only have the hawthorn left. I might keep it! It's a nice tree, and they tend not to grow too big. And if I ever reconsider I can always cut it down then! But at least the view is a lot less impeded now! 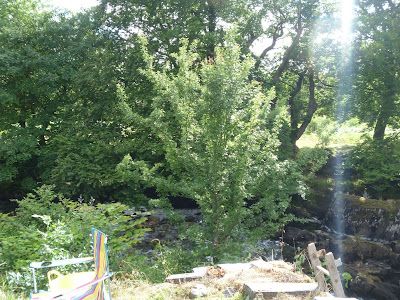 The only tree on this side left standing!