It was one of those weeks where I would be ThursdayNighting. And we would go back to Brynfelin; a place the others had explored extensively but I had only been once. I remembered the midges! But when I got out of the car I noticed the strong breeze, so that seemed to not be such an issue this time. And we had two missions; one was to bring ladders to some otherwise inaccessible passage and explore it; the other was to go down somewhere else and check a drainage adit.

We walked up, carrying the ladders and ropes. I was in my sandals, shorts and tanktop; I figured it was way too hot to get dressed anywhere other than right at the entrance. So I did! By the time I put the furry suit on the breeze was missing and the midges weren't, so it wasn't too unwelcome to cover up. And then we descended.

We put the ladders where we wanted them. Jason went up; he said it did go a bit, but he was a bit nervous about getting off the ladder. Or rather; about getting back on! This can indeed be rather daunting. Then David went up and he isn't afraid so he explored all the way. It sounded interesting! But when I had a look I took the Jason approach and only took one step off the ladder. 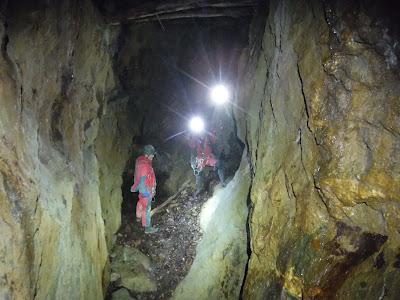 The three of us waiting for Ed to descend. Pics by Ed 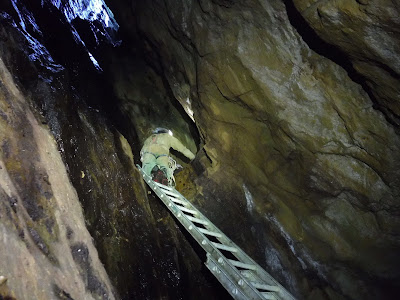 Shall I get off?

Then we moved the ladder to the other side of the stope we were in; there was a pack wall there. This way we could climb it. And venture beyond. David knew there was an adit leading to that stope further on, so he went out so he could come back in there and say hello. And when he did, we figured maybe he could lower the other rope into that passage, to let us climb out the shorter way. Jason volunteered to get the ladders out again, and Ed and I climbed out this new route. Now it was time for our second venture. 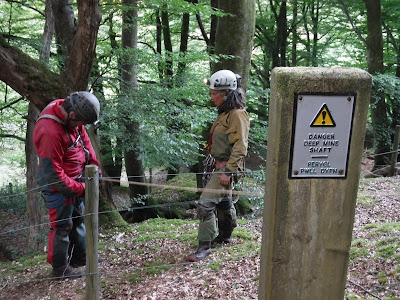 We tied the other rope, and started descending. The first pitch went, via a free-hang, to a ledge. From there we dropped further; it was one pitch but you could get off at several sub-stages. One had to be careful, though, that if one did one didn't end up not being able to reach the rope anymore after someone else had gone down further.

David went to the first stop-off; I followed but went off at the second. David worried about being able to reach the rope so he joined me before he couldn't anymore. Then Jason followed; he went all the way down. But not in total elegance! We heard him swear below. I wondered what the problem was and joined him. He had banged his elbow pretty bad! Oh dear. David came down too. He was still keen on exploring but I was worried about Jason being at the bottom of a sizable pitch with a sore elbow. I thought we needed to get him up, ASAP!  A sore elbow can seize up.

Jason agreed. We shouted to Ed to not come down, and Jason prussicked back up to the ledge. I followed, and by the time I reached the ledge I saw Jason had fallen into Ed's keen casualty care hands. It was decided he shouldn't do the free-hang! But that meant we had to hoist him up. Oh dear.

I went out and started looking for pulleys, slings and jammers. I had one of each on me. I hoped David had more! And while I was starting on my Z-rig he came up. He told me he had his pulleys in the car. Oh dear. We really wanted two. We had one. But one had to be improvised with a karabiner. That introduces a lot of friction though! And Jason isn't heavy, but still.

We first tried, and made the beginner's mistake of having the hauling rope underneath the safety rope. Bad idea. We remediated that and moved the anchor point to somewhere better. That worked! And with a lot of sweat (it was still SO hot) and plagued by midges we hoiked Jason out. Success!

Back at the cars Ed again checked Jason; no visible sign of injury, fortunately. Ed was afraid swelling would have happened between then and now, but no. But Jason's face clearly said it hurt anyway! Let's hope the pain goes away soon... and that adit we wanted to check can wait!