I left Norway in 2009. A long time ago! But then suddenly I got an email from Helgard!  She had to do a course in Colwyn Bay  (or somewhere near there) and she had rightly figured that that wouldn't be very far from me. So did I have time to meet up? Well, yes! I'll make time. This was such a great surprise!

She took the early flight, which meant she could be at her hotel at noon-ish. I made sure to be there by then! Soon a white car pulled up. I looked in; was it Helgard? But the driver was some bloke, so I stopped paying attention. Then it turned out Helgard was the passenger! There she was! After all these years. She hadn't changed a bit.

She got in; the plan was to drive to mine as she was curious about my new house. I also figured she may be hungry by then. After that we could do a walk! And so we did. On the way to Bethesda I fried my brain; I tried to speak Norwegian, but a lot of Welsh came out. I can't speak these two languages in too close a succession! But due to us having learned Norwegian together, she is used to me blending a few languages, although this was the first time I used one she couldn't make head or tail of.

When we got to Bethesda she liked the house, and took pictures of it for her boyfriend Carsten. And we had lunch. We caught up as well! Carsten had a new job.

After lunch I packed a bag that I left leaning against the table, and we set off towards Ogwen Cottage. My plan was to walk to Llyn Bochlwyd, and take it from there. With me having forgot my bag I didn't have as many clothes with me as I would have liked, so when we approached the ridge I suggested we go left, into the valley east of Tryfan (where I had briefly been with Jeff and his family), rather than right over the ridge, and down through Cwm Idwal. She agreed! It was a beautiful walk if you ask me. 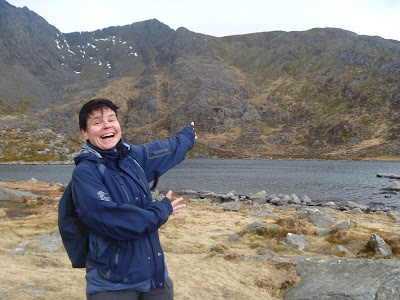 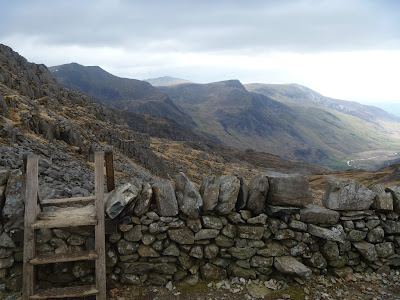 When we got back to the road we crossed it , and walked back along the other side of Llyn Ogwen. It was still beautiful! And after that we were hungry enough to go home, changes shoes (me only), and drive to Conwy for dinner. We randomly parked, and just walked around a bit. It rained, but that didn't stop us. Conwy is rather pretty! We looked at the menus of some pubs. After a while we came across the Erskine Arms, and decided on them. We had dinner and then walked a bit more. We found a point where you can get on top of the city walls (it all felt very York!) and walked around. When we were done with that it was getting dark. I imagined Helgard was getting tired, as she had had to get up at 4AM British time to get here! And I had to get ready for my working day the next day. So I drove her back to the hotel, and we said our goodbyes. I hope she'll come back! We met in Tromso
which is a lot more spectacular than Wales, but now she lives in Oslo, and actually now Wales wins.
So she might! I should get that house ready so I can have guests! 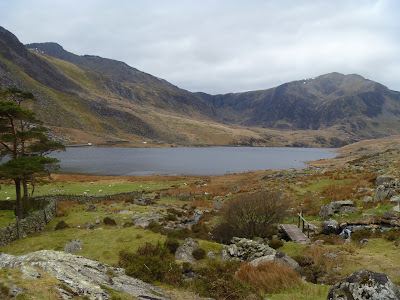 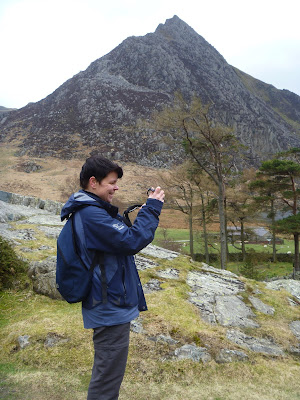 Helgard photographing Llyn Ogwen with Tryfan as the background 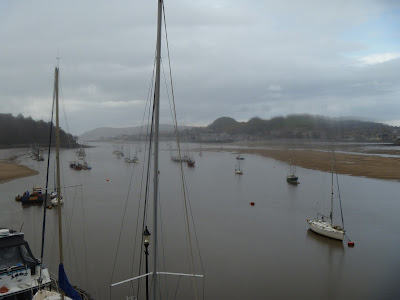 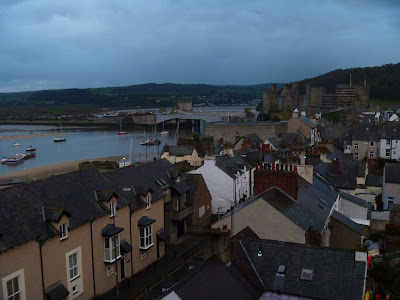