I thought I should show off my house to the ThursdayNighters. And it’s hard to rally them around if you don’t dangle and underground carrot in front of their faces! So I suggested the trial levels on the other side of the valley, as they are within walking distance. But then one of the men suggested a rather watery venue even much closer to home. What a good idea! It’s nice to just trundle to your underground space (without having to lug up the hill) and if you’re going to do a cold wet trip, you might as well do it at walking distance from a nice warm house with a kettle in it! So we did that.

Originally, the men would arrive at 4, on request of David who wanted to take advantage of the good weather to get stuff done. That gave me some time to do work on the house. But while I was putting anti-slip on the steps down into the garden outside he phoned. Was 5.30 good too? Well, I didn’t have much choice I supposed; if that would be when he’d arrive that would be it! But Phil’s plan had been to just have a cup of coffee with us, walk us to the entrance, and then go home as he had to pick up his son. He still came at 4! It was nice. He had only seen the house without stuff in it! It looks better now I’d say.

Then at 5.30, David arrived. He was impressed with the progress I’d made since he’d seen it! And Ed appeared too. Then, suddenly, Sue (with whom I'd biked back from Welsh class) was at the door, with her two children. That’s nice! But slightly confusing timing. I showed her the house. She was impressed! And we spoke Welsh, helped by her eldest, as she was a native speaker. David and Ed looked after themselves. Then Sue disappeared while Paul turned out to already be there. All had a good look at the idiosyncrasies of the house, but then it was time to put on our boots and go. Jason hadn’t shown up; a pity! But what can one do.

We walked to the entrance, past the Indian takeway, where we got some menus. We would order from them once out!

Paul lead us to the entrance. It was a bit wet indeed! Oh well. We walked in; me at the front. That way I saw we were scaring a fish. Cool! Not the scaring, but encountering it, of course. At some point it tried to hide on the side, which allowed us to pass.

My feet were very cold, in spite of the neoprene socks! And I noticed I had spent too much time standing still (sorting out curtain rods, stripping wallpaper) so they hurt. Oh dear!
When we arrived at the interesting bit (not that the level wasn’t interesting, but it is, well, just a tunnel) I quite hurt. I hadn’t thought this through too much! Maybe I should do shorter wallpaper stints and combine it with paperwork more, to spread the load. My feet are in quite good nick these days, but standing still still gets to me!

We did admire the stuff that was there to see: shafts, carts, machinery, shoes, etc etc. The usual! But every new venue is special anyway. I also sat down for some oatcakes as I had already been hungry when we went in. Now it was a lot later! 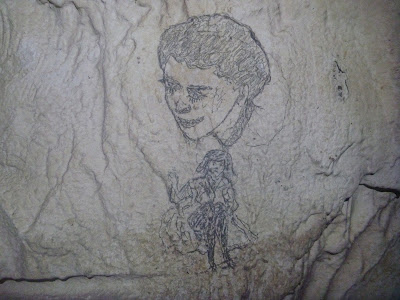 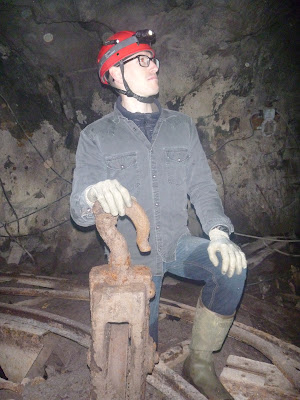 Ed poses with a block 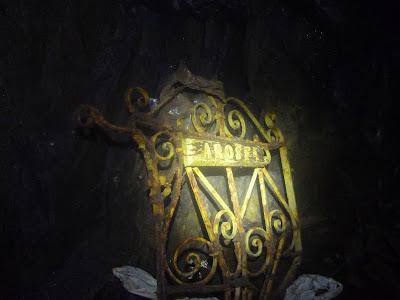 Just after 9PM we started our way out. I went ahead. Some of the bits are slow for the tall people as they have to stoop, where I don’t have to. I decided to just go. In a sloshy tunnel you can’t talk to each other anyway! Too noisy. I legged it out and walked home. I was glad to get out of my wet socks! And I boiled the kettle.

An eternity later the others arrived. Paul was tired, and wanted to go home; he had to work the next day. David, Ed and me chose our curries. And after a cup of beverage-of-choice we went to pick up the food, and ate it in the kitchen. The house is warmed! And I hope the other ThursdayNighters will get to see it soon too.
Posted by Margot at 10:47