Long weekend in the new house

Thursday was the first day in the house, but then I only spent a few hours there. I had the entire Friday! And Saturday. On Friday I first did some admin; I needed, for instance, to move my internet to the new address. That matters! It will move the 16th. I will move earlier. If I need internet and my phone won't do, I can go to my office!

After that I went to the house, and got cracking. I was still torn between all jobs to be done. Emptying out, cleaning, moving furniture in, building furniture back up, etc etc. I kept scampering from one place to the next. I intended to have a cup of tea once in a while but something always came in the way. But I made progress!

I also had my first guest: Phil popped by. He had a critical look at things such as the plumbing. It is good to have knowledgeable friends! And we had a cup of coffee with a view to the river. Very nice! Moving house is a bit of a lonely job and it was nice to have a friend over. Who as well made an appearance was Glynne the joiner; we pulled the carpet out of the landing and had a look at the floorboards below. He'll sand them down and then I have a floor! After that he can get cracking on the master bedroom.

I managed to drag myself away in the evening. I was home a bit late! And knackered. And I didn't sleep well. But the next day I was back. And I made progress again! I cleared out and hoovered the living room, and went though the inventory of the garage. I selected what I want to keep and what needs to go. Ready for a van to transport the lot to the dump!

I also had visits from the neighbour who came to say hi, and from a painter/decorator who came to have a look, and from a stove installer who got ready to give me a quote. Things are moving! But I'll also need a chimney sweep. And maybe a plumber and electrician.

On Saturday I saw the last person (the painter/decorator) at 4; after that, I went for a short stroll. It was time I got some fresh air! It's nice to walk straight into the nearby slate quarry, although it is still active and you can't enter much of it. 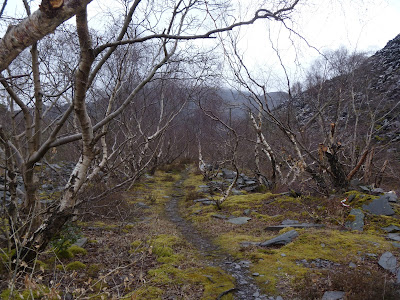 Pretty path on the outskirts of Penrhyn Quarry 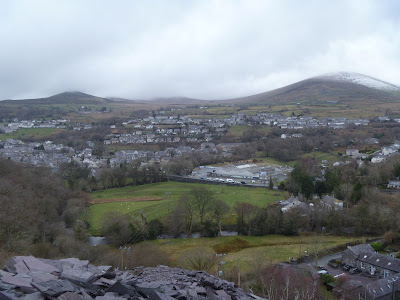 View on Bethesda/Gerlan from Penrhyn Quarry

After that I went home to cook and eat. I thought I'd collapse in a heap afterwards, but I got a text from Glyn; would I be interested in climbing that night? I was knackered, but I figured it'd do me good. We went! We tried Beacon but it was just closing, so we ended up in Indy. That was pretty much deserted. We had all climbing routes to ourselves! And I felt a lot better after it! Thanks Glyn, in a way you are helping my move! I was ready for another day at the grinding stone on Easter Sunday...
Posted by Margot at 07:22