I have no time for a new sport! I already climb on Monday, learn Welsh on Tuesday and Wednesday, and go underground on Thursdays, and then I have a day job and a household to run. And my running to keep up. So the last thing I need is a new sport. But then I got an email, pointing out that there would be an Outdoor Festival, where one was encouraged to try new sports. And diving was one of the sports.

I have always thought diving sounded great. I just wasn't sure if it would be for me. I remembered having to dive plastic donuts from the bottom of the swimming pool in my home town as a child. All Dutch kids need to learn to swim! And not just get from one side of the pool to the other, but also things such as going deep down. I never liked the feeling on my ears. Some people don't dive because they never get used to it. And some people get disoriented in the apparent weightlessness of the water; where is up? So I thought this was the chance to at least get a taste.

One had to list a top three of desired sports; I also ticked mountain biking and setting up top rope. But I got the diving! I was excited. I drove up rather early, registered, and sat down for a coffee. It was busy, so I had to join some people. I ended up in the company of some women who were about to do some Celtic rowing (no, me neither) and paddle boarding, and one who would dive as well. They were really nice!

Then we all got to our sport. Me and Gill (the other diver woman) were lead to the pool. We changed into something appropriate and went in. We were assigned an instructor each. Mine told me to put on flippers and goggles. The flippers threw me! They have no purchase on the floor of the pool, and it's hard to stay upright if you're not used to it. Oh dear! But the goggles were fine, and so was the aqualung. The instructor gave me the signals and down we went. Breathing under water is quite a nice change! We just pootled around a bit, practiced getting the neutral buoyancy just right, which is interesting as your buoyancy changes with every breath you take. The instructor said he was impressed with how easy I seemed to find it, but he may say that to everyone. Anyway; my time was up; my next trip was to a room where a lady did some talking about diving. Then my programme was done! 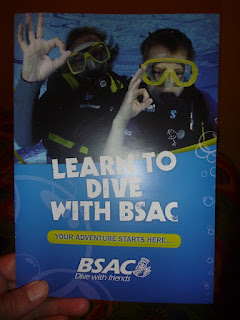 I had decided to go to our digs after the diving; I was a fair way in that direction anyway, and Miles would be there, and David too, but later. I went back to the coffee room to eat my sandwiches before driving on. There I met my ladies again; that was nice! And they were interested in my underground shenanigans; they might one day come with me!

But for the diving: will I go do that? Not anywhere soon, that's clear. But were I to accept a job somewhere without mines and caves, and with water to dive in, I very well might! I still don't know what my ears would think as the pool was too shallow to find out, but it's worth to give it a try... once I'm less busy!
Posted by Margot at 08:48