One of our climbing ladies mentioned she had a friend who wanted to get his Mountain Instructor Certificate. In order to get it, he had to practice, so he was looking for people to instruct. Well, I like being instructed in such ways, so I volunteered! As did Mags, the woman which whom I had done a Single Pitch Award day. That had been very good, so it sounded fun to do something similar again!

When the day approached it became clear the weather would be atrocious. Should we postpone, or go indoors? We went indoors.

Mags and I found our man, Pete, among the other people in there, and we first had a cup of coffee so we could discuss what we would do. We decided he'd first work a bit on our technique. We went to the boulder area where we traversed a bit. Pete showed us how to do that efficiently. It doesn't come natural to me, but with a lot of thinking about it I managed to not waste the massive amounts of energy I normally do. This was starting well! He then made us focus a bit on how to keep our weight above the weight-bearing foot.

The next move was: climb some routes, while trying to do the things we had practiced. The first route we did went well. The next one was harder (although it was classified as an easier route - strange, that) and I threw all my new knowledge out of the window and climbed as usual: on muscles, rather than on technique. Oh dear. I will need to practice before I can climb remotely elegantly on routes like that! But that's OK. 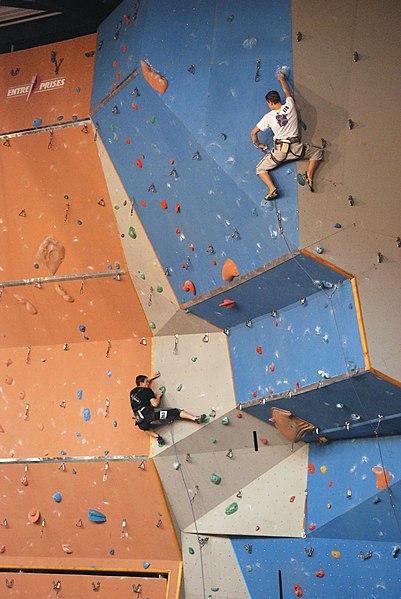 I didn't take any pics that day, so here a nice pic of indoor climbing from Wikipedia, by Romary

By then, it was time for a cup of tea and maybe a sandwich. And after that not much time was left; we did a small round of gear placement, and anchoring oneself in order to belay the next person, which I found very useful. But then time ran out! Pete had to go. He said he'd like to do it again, but then outdoors. That sounded good to us! Although we weren't going to be overly optimistic about the weather in coming months.

With Pete gone I decided to climb another route; that would have to be on autobelay, as Mags was tired and had taken her harness off. But I found out I was tired too. Time to go home! We had been in there for five hours. A good day of climbing! I hoped I'd manage to use it all on the next club climbing night!